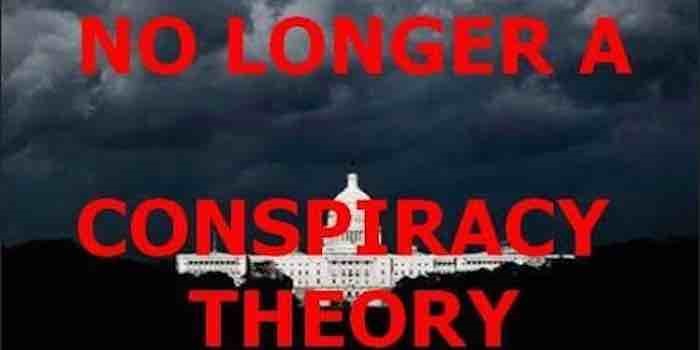 Our government is setting the stage for a totalitarian takeover.  It’s what the doctor ordered (Dr. Schwab, that is).  And that is no conspiracy theory.

When John F. Kennedy became president, his first news conference, like so many, were filled with humor.  A reporter asked the new president if there were any surprises, anything he didn’t anticipate as the new president.  Kennedy thought for a moment and said something like, “Well, our biggest surprise was finding everything was as bad as we said it was.”

And here we are.  Yes, everything is as bad as we have been saying for the last several years. And some of what we reported we could hardly believe ourselves. Yet, we reported it because the sources were credible and were in a better position to know.  They all turned out to be true.  All while we are still being told by the likes of Wikipedia, other Left-wing outlets, and the oblivious, that it is all conspiracy. Even when the likes of the World Economic Forum, the author of much of our crises, were totally upfront about their intentions and even released a video divulging it.   And yet, we can hardly believe the transition our country has taken in such a short time…sort of like the government saying ‘are you going to believe us or your lying eyes?’

We are in the final stages of a Marxist takeover of our country although, in reality, it is manifesting itself as a strange combination of communism and fascism, even so, totalitarian. It began in earnest in 2020 although the process had begun its early stages years ago. It has become obvious to even the skeptics that something is very wrong.

The radicals of the 60s and 70s have now taken over our government and their intention is to destroy it.

The four stages of this takeover, as expressed in 1984 by Yuri Bezmenov, journalist and Soviet defector, are now seeing fruition.

Bezmenov said it will take 15 – 20 years to demoralize a nation. Barack Obama, a schooled Cloward and Piven Marxist, once in office, wasted little time telling us our country is racist and un-redemptive, in dire need of transformation. Our TV screens have shown the destruction of historic sights and statues, the rise of Black Lives Matter led by trained Marxists, Antifa, the militant arm, the ‘Brown Shirts’ of the Marxist movement. Our education system has turned hard Left…renaming schools, teaching the history of our country while concentrating on a negative context, no longer teaching civics or patriotism, and, of course, the media, TV, print and internet show us how everything we stand for is pointless.  Fully half of our young do not believe in our system of government.  Do you believe they came to that perception on their own?

It takes relatively little time to destabilize a nation, 2 – 5 years per the KGB. Destabilization is a decline in the structure of our society.  Democrats worked hard during the pandemic to keep schools and businesses closed to put an end to whatever economic growth Trump had helped create.  It was a planned over-reaction to a manufactured virus not too much worse than a flu virus, easily treated with available and inexpensive drugs, but with availability blocked.  Yes, it happened and remains a crime against humanity.

We now have a two-tiered justice system.  Those who show opposition to the new order are singled out for persecution, intimidation, and prosecution while the politically correct and criminal element, the ‘oppressed’, are given free rein to terrorize and murder the citizenry.  Crime is at an all-time high in every major Democrat city, and many small towns.  Perps arrested hundreds of times with no jail time or even bail. Police are denigrated, even by children. The DOJ raided Trump’s home for records he had in safekeeping. He was already working with the National Archives to arrange their return. The items included a cocktail napkin and menu from a birthday dinner. Obama says he had the most transparent administration in history and yet has been known to destroy and disappear tens of thousands of federal records.  I suppose he had much to hide.  Hillary Clinton destroyed hard drives, Blackberries, and iPads containing emails that were under subpoena.  No legal action taken for either.

Two million migrants, mostly illiterate, unvetted, with their hands out have entered our country illegally… purposely.  We have, in 18 months, turned into a third-world country with nukes.  The only thing missing are the bananas.

Our military, and our international relations all show definite signs of considerable destabilization and deterioration.  Our Judeo-Christian culture, our morality, is succumbing to the Left’s heretical and satanic beliefs.

Once a society has been destabilized, Bezmenov says it is time to send it into Crisis Mode. Take your pick. There has been a steady stream of crises since at least 2020.  The constitutional crisis of the continuing effort to successfully impeach President Trump. The manufactured pandemic appeared after it became obvious President Trump was not going to be convicted in any of the two impeachment trials.  Democrats worked feverishly to create as much panic as possible except when he curtailed travel between the US and China.  Then he became a racist.

The closing of churches, schools, and the destruction of millions of small businesses has changed the face of our nation.  Our economy now suffers.  Our children suffer.  The forcing of an experimental vaccine that now shows itself to be as dangerous as the virus itself.  Hundreds of thousands of people killed, millions injured from the jab. Monkeypox has now appeared with smallpox waiting in the wings,  a disease eradicated in 1977.  Marburg (mortality rate of about 50 – 60%) is waiting as well, all diseases progressively worse than the previous.  All just a coincidence, huh?

The transitory inflation Democrats guaranteed is anything but that.  Stores shelves are becoming bare, people are beginning to wait on food lines in larger cities. Food shortages are actually appearing in America.  Farmers are cutting back on certain crops to save money.  Food processing plants and herds of cattle mysteriously destroyed.  Farmers in Europe forced to close their doors, the government declaring food production an environmental hazard.

The winds of war now blow.  Russia, trying to protect its borders, warned NATO and the United States repeatedly to not expand beyond its buffer in Eastern Europe…all to deaf ears. We’re sending billions of dollars worth of munitions to Ukraine, much of it now on the black market to the highest bidder.  China, on the verge of financial collapse, now pushing the West to let go of Taiwan. History tells us China will not back down.  This is the threat of warfare served as a distraction to the globalists’ plotting.

A panicked, demoralized, and destabilized people will give up their legal and constitutional protections once the government offers them relief.  A solid third of the country is ready to throw in the towel.  The other two thirds, well, we’ll see won’t we?

“After a crisis, with a violent change of the power structure and economy, you have a so-called period of ‘Normalization’ that may last indefinitely,” Bezmenov said.

The people will be promised all kinds of wonderful goodies, universal income, housing, food, you name it.  Many will take it as the tanks roll in…Got ya!

Anyone who doesn’t yet see what is happening to our country and much of the world is deaf, dumb and very blind.  Wikipedia, the online encyclopedia, after everything we have seen, still insists the New World Order is a conspiracy theory. The site is either run by morons or co-conspirators.  The pandemic is no conspiracy theory.  The Deep State is real.  The collapse of our economy, culture and institutions are real.  All our problems stink of an inside job.  The New World Order and its current implementation is real.

Our government is setting the stage for a totalitarian takeover.  It’s what the doctor ordered (Dr. Schwab, that is).  And that is no conspiracy theory.