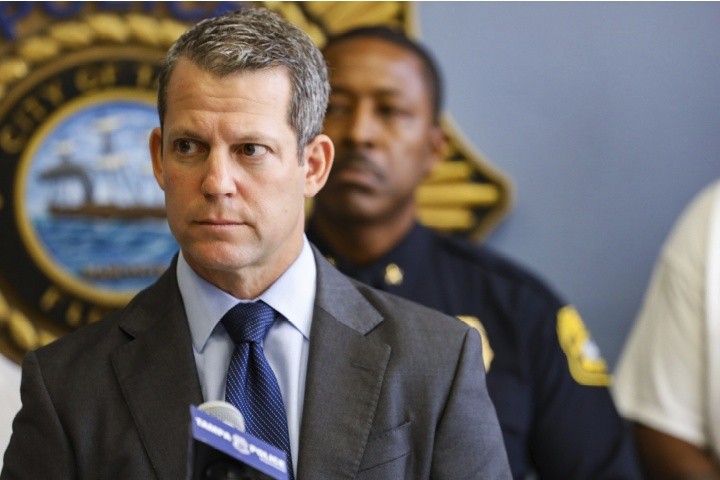 Florida Governor Ron DeSantis struck another blow against the lunatic left when he exercised his power under the state constitution and fired an elected prosecutor funded by billionaire communist agitator George Soros.

The Soros torpedo in this case is Andrew Warren, who, like Soros prosecutors elsewhere, does not enforce laws he doesn’t like.

The move is another blow to Soros, who has spent millions to elect leftist, anti-law-and-order prosecutors across the country. Voters in blue San Francisco recalled Soros prosecutor Chesa Boudin, and they’re about to do the same to Boudin’s predecessor, George Gascon, now the district attorney in Los Angeles.

DeSantis acted “for what he said was Warren’s disregard for his duty to enforce state laws, including a pledge not to prosecute people receiving an abortion or their doctors performing them,” the Tampa Bay Times reported:

At a news conference flanked by police from around Tampa Bay, DeSantis said Warren had “put himself publicly above the law” by signing letters saying he would not enforce laws prohibiting gender-affirming care for minors or laws limiting abortion.

Under a clause in the state Constitution, DeSantis suspended Warren, effectively firing him.

The suspension, which stunned observers, removed one of the state’s most outspoken prosecutors. Warren, a Democrat, has been a frequent critic of DeSantis, a Republican. He called the 2021 “anti-riot” legislation that DeSantis championed a misguided “solution in search of a problem.” He’s also questioned the need for an election security force that DeSantis has helped create.

Amusingly, Warren “was escorted” out of his office, but the newspaper did not report who escorted the hard-left prosecutor. Warren, the newspaper continued, “struck a defiant tone,” as leftists usually do when they aren’t permitted to pursue their ideological urges.

As well, the Times reported, Warren said an abortion or “gender-affirming care” case hadn’t landed in his office, and that when one did, he would just evaluate it on its merits

Refusing to enforce the state’s abortion and “transgender” statute isn’t the only problem, the newspaper continued.

DeSantis told reporters that the trouble for Warren began when fellow Soros prosecutors, such as George Gascon in Los Angeles and Chesa Boudin in San Francisco, refused to enforce the law. DeSantis asked staffers “to make sure that that was not going to happen here” in Florida.

“It all came back to this area here, in the 13th Judicial Circuit in Hillsborough County,” DeSantis said. “And the response that we got was a lot of frustration on the part of law enforcement for criminals being let go and crimes not being prosecuted.”

DeSantis’ order does not cite examples of Warren not prosecuting individual cases.…

But Hillsborough County Sheriff Chad Chronister said at Thursday’s news conference that police have had long-running frustrations with Warren for not prosecuting particular cases.

Other law-enforcement officials joined the criticism, the newspaper continued:

“Andrew Warren is a fraud,” said former Tampa police Chief Brian Dugan. “This is a terrible day, that the governor had to come and clean up our mess.”

The order says “Warren has effectively nullified these Florida criminal laws in the 13th Judicial Circuit, thereby eroding the rule of law, encouraging lawlessness, and usurping the exclusive role of the Florida Legislature to define criminal conduct.”

Aside from refusing to prosecute criminals, Soros’ minions have also tried to prosecute law-abiding citizens for defending themselves against criminals.

Soros has spent $40 million to elect at least 75 pro-criminal prosecutors. Warren is one of them.