The FBI Keeps Interfering In Presidential Elections. Time To Disband It 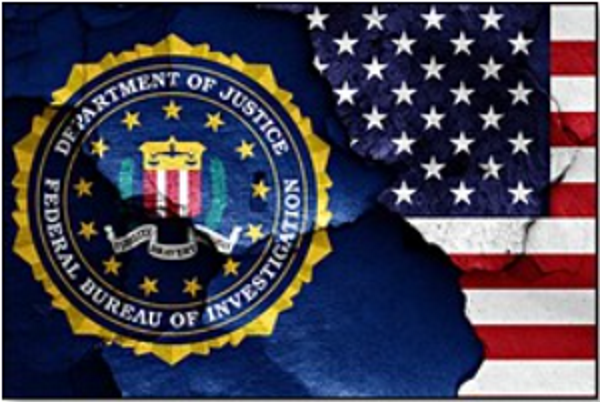 The FBI Keeps Interfering In Presidential Elections. Time To Disband It

Sen. Chuck Grassley’s letter lays out a disturbing conspiracy inside the FBI to interfere in the 2020 election to help Joe Biden win.

News broke Monday evening that the FBI falsely labeled verified intelligence and credible evidence against Hunter Biden as “disinformation” in order to shut down an investigation of him in the run-up to the 2020 presidential election.

It’s hard to overstate the significance of this, despite the lack of attention the story has received so far from the corporate press. The FBI has now directly interfered in two consecutive presidential elections, placing a heavy hand on the scales to benefit Democrats in 2016 and 2020, all in hopes of keeping Donald Trump out of the White House. It would not be too much to say the FBI is a threat to democracy and that it should be disbanded.

Here’s what happened. According to a letter released by Sen. Chuck Grassley, R-Iowa, addressed to Attorney General Merrick Garland and FBI Director Christopher Wray, numerous “highly credible whistleblowers” have come forward about “a scheme in place among certain FBI officials to undermine derogatory information connected to Hunter Biden by falsely suggesting it was disinformation.” 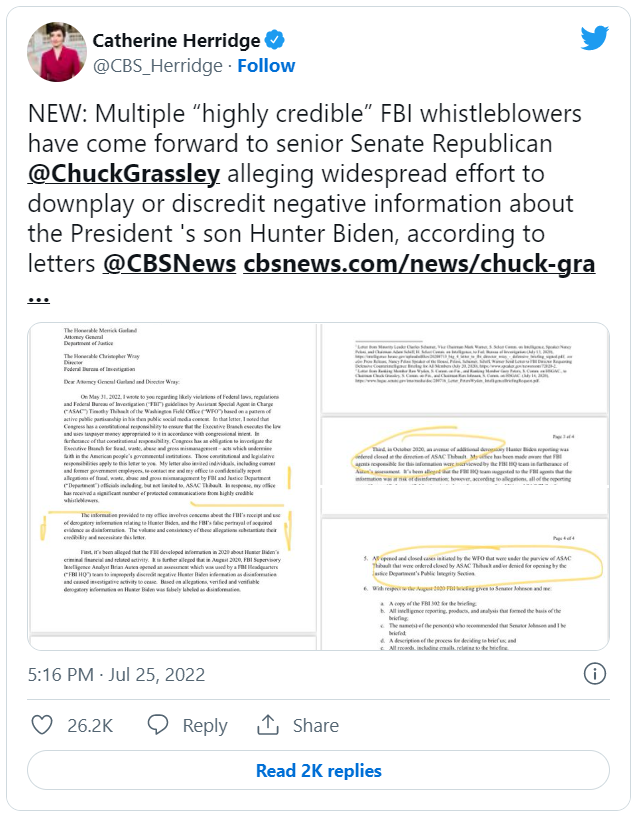 The result of this FBI scheme, which took place in the summer and fall of 2020, was to quash an investigation into Hunter Biden’s “criminal financial and related activity,” which had reportedly started as a tax investigation, just before the November election that year. Grassley, the ranking member of the Senate Judiciary Committee, said that the “volume and consistency of these allegations substantiate their credibility and necessitate this letter.”

Grassley’s letter tells a shocking tale that should enrage every American, regardless of party, in part because some of the same FBI agents who interfered in the 2016 election did it again in 2020. Whistleblowers say that in August 2020, FBI supervisory intelligence agent Brian Auten “opened an assessment” of an ongoing FBI investigation of Hunter Biden, and that this assessment was used by FBI headquarters “to improperly discredit negative Hunter Biden information as disinformation and caused investigative activity to cease.”

Recall that Auten was deeply involved in Crossfire Hurricane, the FBI’s counterintelligence investigation into the Trump campaign that became the basis for the Russia collusion hoax. It was Auten who was in charge of verifying the phony Steele dossier but failed to flag its many errors and inconsistencies. He interviewed Igor Danchenko, a Russian-born lawyer who was the main source for the Steele dossier’s outlandish claims, three times in 2017. During those interviews, Danchenko undercut claims of collusion between the Trump campaign and Moscow, raising serious doubt about the reliability of the dossier.

Auten was also in charge of reviewing the flawed Foreign Intelligence Surveillance Act application to spy on Trump campaign associate Carter Page, which relied on the discredited dossier. According to Inspector General Michael Horowitz’s report on FISA abuse, Auten failed to advise his superiors of the inconsistencies between the Steele dossier and its primary source, Danchenko, including allegations against Page.

But it doesn’t stop there. Grassley’s letter also includes allegations from whistleblowers that the FBI assistant special agent in charge of the Washington field office, Timothy Thibault, “ordered closed” an “avenue of additional derogatory Hunter Biden reporting” in October 2020, a month before the election, without giving a reason as required by FBI guidelines, despite the reporting being “verified or verifiable via criminal search warrants.”

That is, Thibault closed the investigation even though he and others at the FBI knew much of what had been uncovered was true. Thibault is the FBI agent whose abjectly partisan social media presence prompted Grassley to send a letter in May accusing him of likely violations of federal law and FBI regulations for a “pattern of active public partisanship in his then public social media content.”

In order to ensure the Hunter Biden investigation was not reopened, Thibault and other FBI officials allegedly “attempted to improperly mark the matter in FBI systems so that it could not be opened in the future,” according to Grassley’s letter.

If Grassley’s sources are telling the truth, what we have here — at the very least — is a conspiracy inside the FBI to suppress an investigation into Joe Biden’s son in the months before the election. Why would the FBI do such a thing?

Perhaps some among the same cadre of FBI agents who cooked up the Russia collusion hoax knew that if the verified and verifiable derogatory information they had about Hunter Biden got out, it would kill Joe Biden’s chances of ousting Trump from the White House. So they killed the investigation, falsely labeled evidence against Hunter Biden as “disinformation,” and then tried to bury the whole thing.

Now that Grassley has come forward with these allegations, we need to know everything. The FBI and the Justice Department need to give Grassley everything he asked for, and there needs to be a full investigation (perhaps by a special counsel). Then if the allegations turn out to be true and the FBI really did intervene in the 2020 election as Grassley’s letter suggests, the forthcoming GOP congressional majority needs to disband — or at least defund — the FBI.

The issue is existential for our republic. If all this is true, then both the FBI and the Justice Department are, in Grassley’s words, “institutionally corrupted to their very core to the point in which the United States Congress and the American people will have no confidence in the equal application of the law.”

They also won’t have confidence in the freeness and fairness of our elections. And they’ll be right.

John Daniel Davidson is a senior editor at The Federalist. His writing has appeared in the Wall Street Journal, the Claremont Review of Books, The New York Post, and elsewhere. Follow him on Twitter, @johnddavidson.