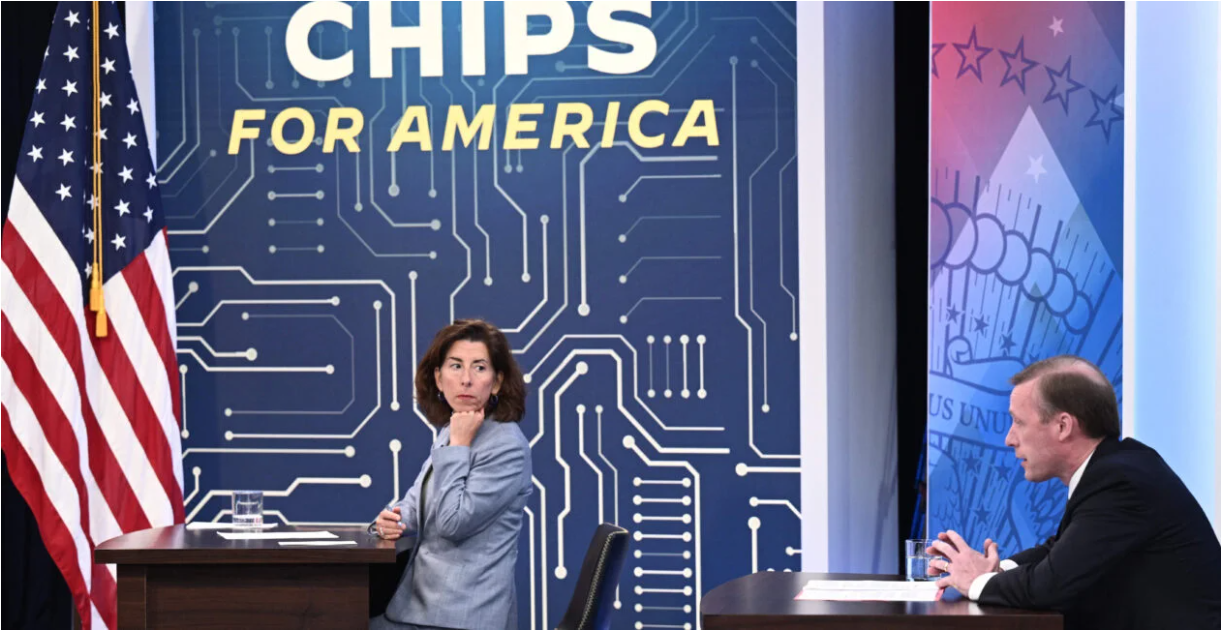 Secretary of Commerce Gina Raimondo listens as national security adviser Jake Sullivan speaks at a virtual meeting with President Joe Biden, CEOs, and labor leaders on the CHIPS for America Act in the Eisenhower Executive Office Building, next to the White House, on Monday. (Photo: Brendan Smialowski/ AFP/Getty Images)

By Anthony B. Kim

Congress and the Biden administration are gearing up a bloated Creating Helpful Incentives to Produce Semiconductors for America Act, but the CHIPS for America Act runs the real risk of chipping away at America’s economic freedom and competitiveness, rather than enhancing it.

The Senate is scheduled this week to vote on the bill, whose price tag has soared to $250 billion from the initial $76 billion. The legislation does little to counter the economic challenge posed by China and the Chinese Communist Party, but spends billions of dollars on corporate handouts to tech companies and more funding for federal agencies.

Despite a handful of useful foreign policy and security provisions, the eye-poppingly expensive legislation would hand out $250 billion with few firewalls to keep those funds from helping China, and it bluntly disregards the fact that inflation, which has been fueled by the Biden administration’s out-of-control spending, has topped 9%.

To be clear, the U.S. is in a long-term struggle with the Chinese Communist Party. It’s the most critical and consequential international challenge the U.S. faces. However, the CHIPS for America Act is not the way to address this serious issue, either effectively or practically.

The Chinese Communist Party represents a threat to American values, interests, and freedoms unlike any other we have faced in our history. Unfortunately, the CHIPS Act does little to counter those threats and protect our way of life.

The answer to the CCP’s malevolent ambitions is not spending billions of dollars to help Fortune 500 companies, with no guarantee those dollars won’t end up supporting these companies’ business operations in China.

Additionally, the act’s $250 billion price tag will contribute to record inflation and increase the already historic cost of living for working and middle-class Americans.

(The Daily Signal is the news outlet of The Heritage Foundation.)

The China challenge, which America must deal with and win, spans the full range of national power—economic, military, diplomatic, and informational. We need effective, muscular policies in all of those areas.

On economics, in particular, that means an approach based on empowering America’s growth engine with greater economic freedom, not with a politically driven spending spree.

For more than a quarter-century, The Heritage Foundation’s annual Index of Economic Freedom has measured the impact of free enterprise buttressed by the rule of law, limited government, regulatory efficiency, and market openness in countries around the globe. The strongly positive correlation between a nation’s level of economic freedom and its citizens’ overall standard of living and competitiveness underscores just how critical economic freedom is in practice.

Yet, after reaching a high score in 2006, the United States fell from the “Free” category to “Mostly Free” in 2010. Economic freedom has continued to slide, hitting an all-time low in 2022, ranking America behind 24 other nations.

America’s economic freedom is under assault from massive government spending bills that drive the country and its citizens deeper into ever-growing debt. The taxes that must ultimately pay for the government’s spending spree shift the freedom to choose from the individual to the government.

Economic freedom is also eroded through numerous  layers of politically driven regulations. Contrary to what some politicians argue, America’s competitive position is not threatened because the federal government is not spending or doing enough. Instead, the problem is that government has grown too big in terms of its scale, scope, and power over people’s daily lives.

America needs limited government, not expanded and expensive government, to ensure a transparent and competitive economic environment in which citizens enjoy the freedom and opportunity to prosper to the fullest possible extent.

In reminding us of what policy actions should be taken to address the unfortunate state of the American economy, Heritage’s Roberts and Sen. Mike Lee, R-Utah, penned a joint op-ed column earlier this year:

Ever since America’s founding—upon principles of market capitalism that elites hated, then as now—we have been the living thing in the global economy. For two centuries, we defied the cronyism and timidity of corporate and political insiders, and entrusted our economy to our people—and that has made all the difference. …

[E]conomic freedom is not something Americans should apologize for, but harness, spur and give free rein.

In fact, 2022 is the year to act on that reminder to restore America’s economic freedom, now more than ever.

Despite backers’ claims, the CHIPS for America Act is not about effectively dealing with China, whose economic freedom deficit has severely distorted markets beyond its borders. The act is just another unacceptably bloated spending bill that resembles the derailed Build Back Better Act. More spending will make America’s ongoing 40-year-high inflation problem worse and further erode America’s overall economic freedom and competitiveness.

The U.S. can and must handle the China challenge, but to do that, Washington’s policymakers must move beyond their old-fashioned feel-good spending political instincts—and beyond the CHIPS for America Act.

Anthony B. Kim is a research fellow in economic freedom at The Heritage Foundation, editor of the Index of Economic Freedom, and manager of global engagement for Heritage’s Margaret Thatcher Center for Freedom.