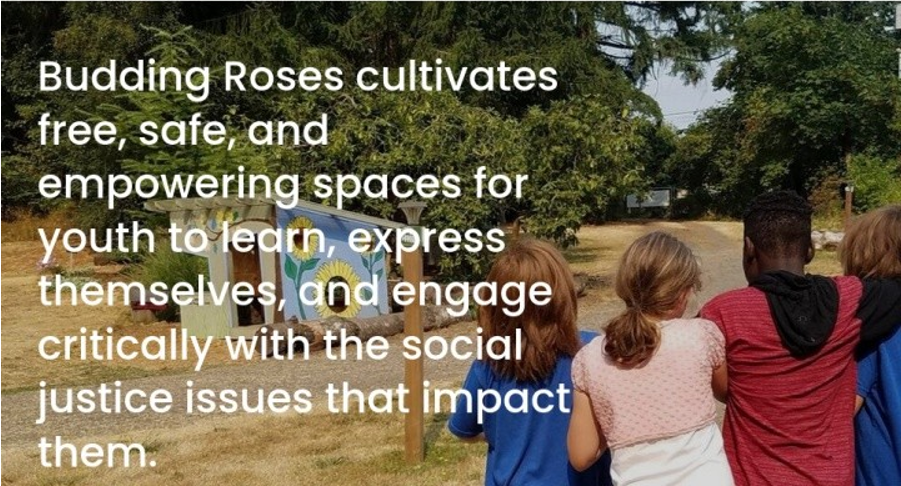 Portland Antifa has established a summer camp for children that indoctrinates them in Marxist propaganda, including “reflecting on white supremacy” and advocating for incarcerating police officers.

The camp in question is called Budding Roses and claims to cultivate “free, safe, and empowering spaces for youth to learn, express themselves, and engage critically with the social justice issues that impact them.”

The organization behind Budding Roses is the Black Rose Anarchist Federation. The “About” section of the group’s website states that its work “is centered on building mass movements such as tenant unions, neighborhood assemblies, workplace campaigns, student unions, prisoner organizing, and in defense of communities resisting criminalization.”

A Black Lives Matter-themed coloring book used at the camp is filled with transgender ideology and a chant referring to the “rapist” government.

The “Curriculum” page of Budding Roses lists topics and materials such as “What is Police Abolition,” “Walking Tour of Radical Portland,” “Prison Industrial Complex from Critical Resistance,” and “Tear Gas for Portlanders.”

The latter is a book in which a narrator introducing himself as “your friendly neighborhood anti-fascist” discusses the ins and outs of tear gas and argues against its use.

Notably, Budding Roses was awarded the Spirit of Portland Award for nonprofit initiative of the year from the city of Portland in 2018. PJ Media reported the group’s acceptance speech:

As Budding Roses, our goal is to empower the voices of youth, especially those most affected by white supremacy and patriarchy, and we strive to embody in all our work that power comes not from authority, but from below.

Unfortunately, we find it ironic to be presented this award from a city that doesn’t seem to share these values, given its history of using police violence against anti-racist activists while shielding racist demonstrators, and most recently a proposal by Mayor Ted Wheeler to enforce a restrictive protest policy.

In its mission statement, Black Rose Anarchist Federation calls itself “an organization of revolutionaries … inspired by the traditions of anarchist-communism, anarcho-syndicalism, especifismo, platformism, feminism, queer liberation, black liberation, abolitionism, anti-racism and their history of global struggle for liberation.”

“We believe in the need to create spaces for the development of new revolutionaries that allow the grouping together of similarly minded militants,” the organization adds.

Joe Biden once assured Americans that Antifa is an “idea, not an organization.” Yet it is clearly not only an organization, but one that is well-structured and well-funded, possessing not only the militant street division, but sophisticated recruitment methodologies that include curriculum and abundant printed materials for radicalizing the young.

In reality, Antifa is better organized than it would have its detractors believe. At the height of the 2020 riots, The New American detailed how Antifa used sophisticated tactics of fourth-generation warfare in the siege of a police precinct in Minneapolis.

But Biden’s infamous remark is demonstrative of precisely the type of attitude from Democrats that has so long emboldened and enabled Antifa violence. By downplaying, minimizing, and sweeping under the rug open destruction and mayhem, acting as though the burning, looting, and murdering exists only in the imagination of Trump supporters, Democrats have done a disservice to their constituents.

In short, Democrats provide the cover for Antifa to continue its reign of violence by making it clear that, so long as they’re in charge, there will not only be no consequences for their law-breaking, but they will actively shield Antifa from Republican politicians who try to bring them to justice and from everyday Americans who engage Antifa in self-defense.

The only solution is to take these societal saboteurs out of the equation altogether, putting them behind bars where they cannot carry on their work of destruction.

In the United States, we have a long laundry list of individuals who have long and publicly been involved in destroying the country from within. George Soros is one of the most well-known names on that list.

Unearthed documents, for instance, reveal that Soros funded Black Lives Matter, which, since the death of George Floyd in 2020, has been responsible for everything from riots to assault to attacks on federal buildings to financial fraud to murder.

The growth of Budding Roses shows another dimension to the Antifa threat: The Left is legitimizing it with platforms by which it can indoctrinate the young, giving it a greater degree of power.