How the Left Hopes to Seize Control of Local Election Offices 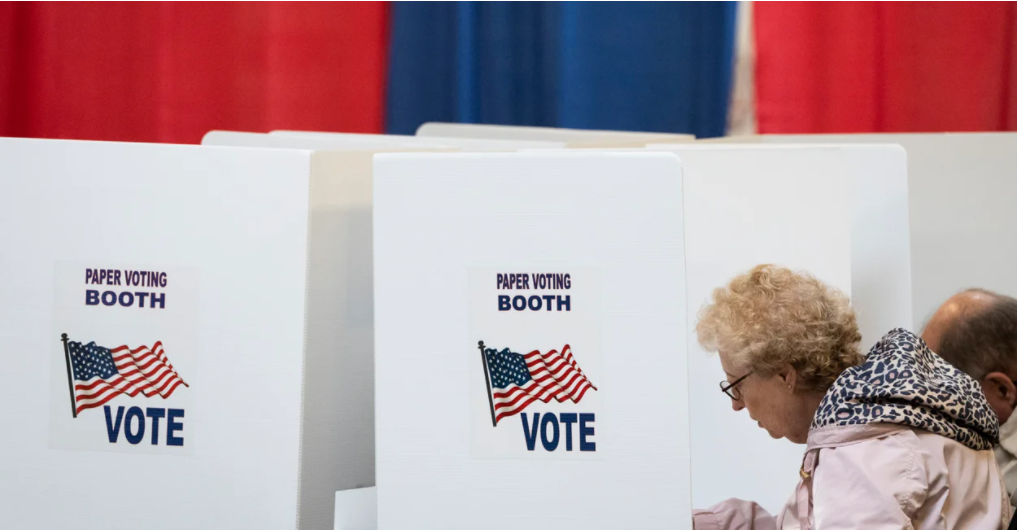 “It is a very dangerous development for local election officials, who were supposed to be objective and nonpartisan,” Heritage Foundation election expert Hans von Spakovsky says.  Pictured: Voters cast ballots early April 25 for the May 3 primary election at the Franklin County Board of Elections in Columbus, Ohio. (Photo: Drew Angerer/Getty Images)

How the Left Hopes to Seize Control of Local Election Offices

Two big money liberal operations, ready to spend $80 million each, are trying to determine who controls elections and how in the years ahead.

“The overall objective of the political left is to change the way you conduct overall elections,” Jason Snead, executive director of the Honest Elections Project, which advocates clean elections, told The Daily Signal.

One of the two liberal groups, Run for Something, is a political action committee founded by a former Hillary Clinton campaign staffer. In the spring, Run for Something established its Clerk Work project with the goal of electing clerks, election supervisors, registrars, recorders, and other local officials charged with running elections.

The PAC says it will promote thousands of election administrators in the years ahead. But for 2022, it reports endorsing 11 candidates competing in races in California, Colorado, Illinois, Missouri, Nevada, North Carolina, and Tennessee.

Local election clerks generally are empowered to interpret and enforce state election regulations. They often have discretion on matters such as whether to count absentee ballots that come in after Election Day, how strictly to enforce voter ID or signature-matching requirements, and how closely poll watchers may monitor the ballot counting on Election Day.

According to the National Conference of State Legislatures, county-level election officials are elected in 22 states. In 10 states, elected officials appoint members to a local board of elections. Another 18 states divide election administration duties between two or more offices.

In any case, donating to specific candidates to oversee elections could directly or indirectly affect who holds these positions.

Some practices of local election administrators also could be guided by another $80 million effort by the U.S. Alliance for Election Excellence, a coalition of mostly left-leaning organizations financed in part by Big Tech executives to train local officials in running elections.

Snead and other critics say they see parallels between Run for Something and efforts to elect liberal prosecutors financed by liberal hedge fund manager George Soros. They also see strong similarities between the U.S. Alliance for Election Excellence and Facebook founder and CEO Mark Zuckerberg’s election administration grants in the 2020 election cycle.

“What we shouldn’t lose track of is they are playing the long game,” Snead said. “They are going to look for every possible way to impact elections, and they can make substantial changes in the long run through this kind of program that they wouldn’t have been able to make in 2020.”

“I would not be surprised if someone gets elected with the support of Run for Something and then immediately plugs themselves into the [Alliance for Election Excellence], because there are those natural synergies,” Snead said.

The Clerk Work project is new this year, but politicization of election officials has been a growing controversy for years.

In 2012, Kathy Nickolaus, a Republican county clerk in Waukesha County, Wisconsin, agreed to step down after saying that “human error” led to the late discovery of 14,000 uncounted votes in a contested election.

In 2019, Florida Gov. Ron DeSantis, a Republican, removed Broward County Supervisor of Elections Brenda Snipes, a Democrat, who admitted in a 2017 lawsuit that the county had more registered voters than eligible voters, and that noncitizens and ineligible felons may have voted in past elections.

A Florida judge ruled in 2018 that Snipes violated the law when she destroyed ballots from a Democrat congressional primary in August 2016. Her office once posted the results of an election 30 minutes before polls closed.

In 2012, Donald Whitten, a Democrat who was county clerk in Lincoln County, West Virginia, pleaded guilty to stuffing ballot boxes and falsifying absentee ballots in 2010.

“It is a very dangerous development for local election officials, who were supposed to be objective and nonpartisan,” von Spakovsky said.

“This group is trying to elect political consultants and political activists to these positions, with the potential for meddling with the election results and further undermining confidence in elections,” he said of Run for Something.

Run for Something’s $80 million Clerk Work project, which began in April, is set to span three years and encompass 35 states.

The project closely resembles one by Soros, a Hungarian-American billionaire, to elect district attorneys across the country who would take a progressive approach to prosecutions, Snead said. But in this case, it’s a national effort to elect left-leaning election officials, he said.

Soros was the primary funder behind Justice and Public Safety, the super PAC that gave big donations to the campaigns of liberal candidates for district attorney.

“What we are seeing is the same sort of strategy being directed toward election officials,” Snead told The Daily Signal, referring to activists on the left. “They are trying very much to repeat that strategy and the successes that they’ve seen in these local election officials, and the consequences could be significant.”

In the case of electing prosecutors who would be softer on criminals, Soros fueled national campaign resources into what had previously been low-dollar, down-ballot local campaigns. The effort to put sympathetic elections officials in place could be similar, Snead said.

“A lot of these positions are very, very down-ballot races. They can be won or lost—in terms of campaign spending—at the cost of buying a box of doughnuts,” he said. “The idea that you have an organization coming in like Run for Something, bringing national resources to these races, it could be a substantial impact on the race itself.”

‘Influence … Who is Administering Elections’

In 2017, former Hillary Clinton campaign aide Amanda Litman founded Run for Something as a 527 political action committee aimed at winning down-ballot races, endorsing candidates, and helping to fund their campaigns.

Run for Something did not respond to numerous inquiries from The Daily Signal about this report.

Litman, however, recently told The Washington Post, “You can influence quite literally who is administering elections,” and added: “If we don’t do it, we are absolutely going to regret it.”

The organization’s Clerk Work project specifically aims to elect liberal election workers. In April, Litman tweeted that Clerk Work will be “supporting 5,000+ candidates for local offices in charge of election administration,” the website of the Alliance for Election Excellence says.

However, Run for Something’s candidates page lists only 11 candidates running in 2022 for offices such as county clerk, county registrar, and county recorder—all with supervisory roles over local elections.

Run for Something notes that Steve Bannon, a former campaign and White House adviser to Donald Trump, said in December 2021:

In a December 2021 tweet, Run for Something said of the former Trump aide: “Steve Bannon is recruiting people to run for local election administrator. So are we.”

However, recruiting registered Democrats or Republicans as poll workers and poll watchers is different than a well-financed effort to place party activists in election supervisory posts, said Snead, head of the Honest Elections Project.

One of Run for Something’s largest donors is LinkedIn’s political arm, which gave $250,000 in the 2018 election cycle, the most recent listed by the Center for Responsive Politics, which monitors political donations.

The Alliance for Election Excellence is a five-year, $80 million project made up of seven nonprofit organizations aimed at advising local election offices on how to run elections in their jurisdictions.

The Center for Tech and Civic Life is the leading organization among seven in the alliance.

In 2020, the Chan Zuckerberg Initiative gave $350 million to the Center for Tech and Civic Life, a left-leaning group that distributed grants to mostly Democrat-dominated precincts, driving up the vote. The Zuckerbergs’ grants, dubbed Zuckerbucks, helped finance drop boxes and expanded mail-in balloting, among other activities.

Although the Alliance for Election Excellence is not specific about what recommendations it will promote, critics such as Snead suspect it will be suggestions that tend to help Democrats, such as expanding mail-in voting.

Other groups in the alliance include the Center for Secure and Modern Elections, a project of the New Venture Fund, itself  sponsored by the liberal dark money group Arabella Advisors. Arabella Advisors sponsors several left-leaning organizations, some of which are pop-up organizations that exist for the duration of an election cycle while others spin off to become independent nonprofits.

The alliance’s “training” is a loophole to avoid bans on private funding of election administration in 21 states, Snead said. No one should assume this $80 million project would be less effective than the $400 million Zuckerberg project in 2020, he said.

That funding was skewed heavily toward expanding mail-in voting and providing ballot drop boxes, and critics say this could have amounted to a get-out-the-vote effort that helped Democrats.

“If you assume that 2020 was a learning opportunity at the very least, then certainly they could come back with potentially more effective programs the second go-around,” Snead said.

—The Center for Civic Design, an election-administration policy organization that frequently partners with left-of-center organizations.

—The Arabella-sponsored Center for Secure and Modern Elections, which advocates for automatic voter registration.

—The Hasso Plattner Institute of Design at Stanford, part of the university’s school of engineering.

—The Elections Group, a consulting organization that works with election officials and was established in 2020 to respond to the COVID-19 pandemic.

—The Prototyping Systems Lab at University of California, Davis, which focuses on designing technology.

—U.S. Digital Response, which started during the pandemic to help with state and local governments’ digital needs.

The Alliance for Election Excellence is inviting cities, counties, and other local election jurisdictions to apply for training to become “centers for excellence.” Its website says:

As part of the alliance, centers will receive training, mentorship, and resources, and serve as a support system for each other and election departments across the country. … Local election officials are the expert on what their voters need, and the alliance will work with each center to fill in the gaps. This could look like redesigning a form so it’s more likely a voter will successfully complete it or updating an election website so it is mobile-friendly and answers voters’ top questions.

Given the political ties of the organizations running the alliance, Heritage’s von Spakovsky said, he is skeptical that the organization is trying to train election officials in best practices.

“‘Best practices’ is a thin disguise necessary for doing what these organizations wanted to see done under the HR 1 federal bill, which was legislation that would have made fair and honest elections nearly impossible in the future,” von Spakovsky said.

The former Federal Election Commission member was referring to HR 1, dubbed the “For the People Act,” legislation from congressional Democrats that passed the House last year but died in the Senate.

The bill would have nationalized local or state election procedures by banning voter ID laws in most states, expanding the controversial practice of ballot harvesting, and mandating that every state allow Election Day voter registration.