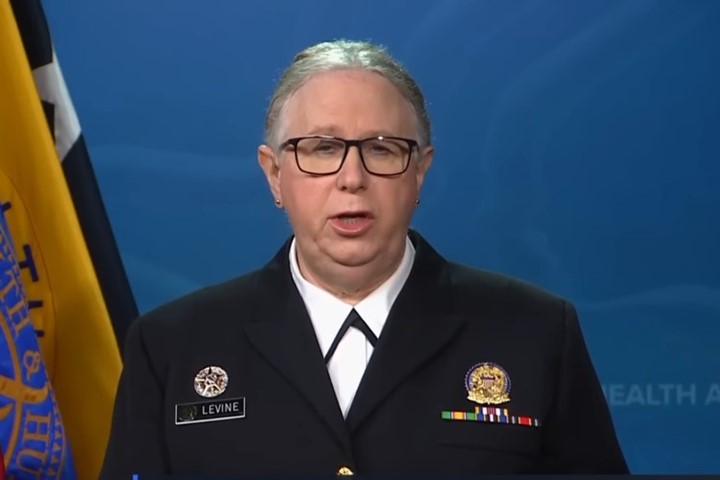 “Admiral” Rachel Levine, the cross-dressing man-lady and No. 2 health official in the country, unbosomed another big lie on MSNBC on Monday.

Levine, whose real name is Richard, wants to “empower” those tortured young souls by permitting them to persist in the false belief that they are the “wrong” gender, and, of course, get “gender-affirming” treatment. That means the “right” to neuter themselves with “sex reassignment surgery,” the medical term for the mutilation of their sex organs.

Ever since Joe Biden hired the cross-dressing pretend woman as the assistant secretary of Health and Human Services, he — Levine — has been pushing the idea that kids can be “trans.”

HHS, for instance, has declared that denying “gender-affirming treatment” to a kid with “gender dysphoria” — the term that describes the false belief that one is the “wrong” gender — is illegal, as The New American reported in April.

Levine, who was married for almost 30 years when he declared himself a woman, reinforced science-denying “transgender” ideology when he spoke with MSNBC’s Andrea Mitchell.

He claimed that trans kids are going crazy because they’re bullied.

“Well, you know, trans youth are vulnerable, and they suffer significant harassment and bullying, sometimes in schools or their community,” Levine said. “They have more mental health issues, but there’s nothing inherent with being transgender or gender diverse, which would predispose youth to depression or anxiety.”

That, of course, is utterly false, as renowned psychiatrist Dr. Paul McHugh has repeatedly warned.

It’s that harassment and bullying. Now they are suffering politically motivated attacks through state actions against these vulnerable transgender youth. This is not based upon data. These actions are politically motivated. And so we really want to base our treatment and affirm and to support and empower these youth, not to limit their participation activities in sports and even limit their ability to get gender-affirmation treatment in their state.

Levine advocates chemically castrating boys and sterilizing girls with puberty blockers, and says that “trans” kids must be stopped before going through the “wrong puberty.”

“The first phase at the young adolescent age is to give what is called a pubertal blocker, to give a medicine to block the progression of puberty, so you don’t go through the wrong puberty,” he said in 2017.

Between 14 and 16 years of age, kids would get “cross-gender hormones.”

Even worse, though, if Levine gets his mitts on your kids, “they never go through the wrong puberty,” he continued:

So you block puberty … and then at the appropriate time send them through the puberty consistent with their gender identity.

Levine, and Biden himself, actually call that “gender-affirming” healthcare.

Levine’s claims are as wrong as they are dangerous, McHugh has observed.

McHugh says that some men — perhaps Levine is one of them, like Bruce Jenner, who calls himself Caitlyn — dress as women because it arouses them sexually. But most kids with “gender dysphoria” don’t have that problem. Instead, they have “psychosocial” problems.

“Gender dysphoria — the official psychiatric term for feeling oneself to be of the opposite sex — belongs in the family of similarly disordered assumptions about the body, such as anorexia nervosa and body dysmorphic disorder,” McHugh wrote in 2015:

Its treatment should not be directed at the body as with surgery and hormones any more than one treats obesity-fearing anorexic patients with liposuction. The treatment should strive to correct the false, problematic nature of the assumption and to resolve the psychosocial conflicts provoking it. With youngsters, this is best done in family therapy.

But that isn’t happening, he said, because tranny ideologues such as Levine rule the leftist media and the government.

“The larger issue is the meme itself,” McHugh continued:

The idea that one’s sex is fluid and a matter open to choice runs unquestioned through our culture and is reflected everywhere in the media, the theater, the classroom, and in many medical clinics. It has taken on cult-like features: its own special lingo, internet chat rooms providing slick answers to new recruits, and clubs for easy access to dresses and styles supporting the sex change. It is doing much damage to families, adolescents, and children and should be confronted as an opinion without biological foundation wherever it emerges.

That truth won’t stop Levine or Biden from pushing “trans” ideology on the country, as the appointment of a sex freak who enjoys “pup play” well shows.

What Biden didn’t know is that Sam Brinton, who runs the nation’s nuclear waste disposal bureau at the Energy Department, has defended underage prostitution.