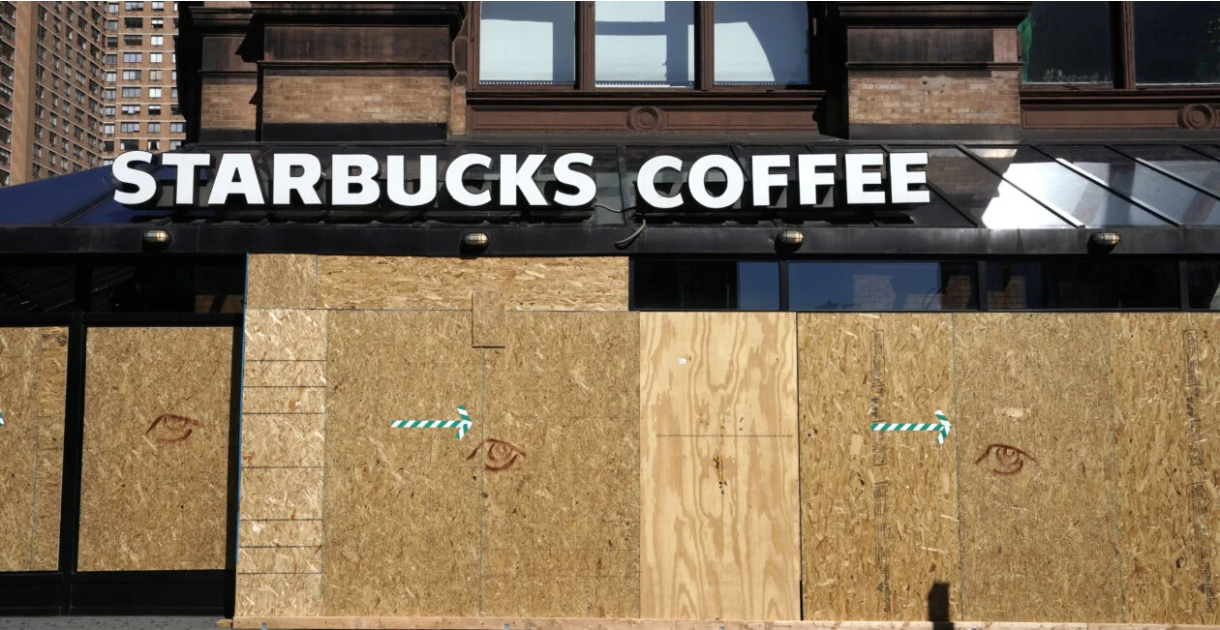 Troubled times may be ahead for the marriage between corporate America and the left.

Starbucks recently announced that it’s closing over a dozen stores because of crime and safety concerns.

“We’ve had to make the difficult decision to close some locations that have a particularly high volume of challenging incidents that make it unsafe for us to operate,” a Starbucks spokesman told CNBC.

What is the primary driver of Starbucks locations becoming unsafe? Starbucks’ top executive had an interesting answer.

In a video leaked on Twitter, Starbucks interim CEO Howard Schultz pinned the source of the problem on politicians and other city leaders who’ve failed to contain crime.

“In my view, at the local, state, and federal level, these governments across the country and leaders—mayors, governors, and city councils—have abdicated their responsibility in fighting crime and addressing mental illness,” Schultz said.

It’s interesting to hear Schultz say this. He generally has been a man of the left, though he left the Democrat Party in 2019 and became an independent.

The question is: Will companies such as Starbucks reconsider their general support of left-wing social causes and policies that have caused them a huge financial headache?

And will left-wing activists stick with these woke companies that now are closing stores and laying off employees?

Of the 16 Starbucks locations set to close, a majority are on the West Coast, apart from Philadelphia and the District of Columbia. Most are in Seattle, Los Angeles, and Portland, Oregon.

Every one of the cities with closing Starbucks outlets has a Democrat mayor and little political opposition.

This may just be the beginning of safety-related closures, as Schultz indicated in the leaked video.

“It has shocked me that one of the primary concerns that our retail partners have is their own personal safety,” Schultz says in the video. “America has become unsafe.”

The increase in violent crime has been a national trend, but the cities most affected by the spike in crime typically are places that had significant civil unrest in 2020.

Portland, the poster child of this crime wave phenomenon, has seen the most dramatic increase in violent crime. A recent report showed that Portland’s homicide rate increased by a staggering 207% between 2019 and 2021, nearly twice as much as the city with the second-highest increase in homicides.

And that city was Minneapolis, ground zero for 2020’s unrest and initial epicenter of the “defund the police” movement following the death of George Floyd in police custody.

In many cities, property crime and retail theft are surging too, as criminals realize they won’t pay a serious consequence for lawbreaking.

What’s interesting about the safety-related Starbucks closures is how the announcement has followed the trend of other, major national companies that have decided to close stores or locations for similar reasons.

Now, some have called into question the motives behind these closures, saying that it’s simply downsizing due to supply chain disruptions and a move to online retail.

In the case of Starbucks, some former employees say it was their plan to unionize that prompted Starbucks to close stores under the guise of safety.

Additional reasons may exist for sudden store closures other than crime. But there’s little doubt that increases in crime have created a more challenging economic environment.

Anarchy is bad for business. When you combine anarchy with resultant higher security needs, you end up with a lot more companies shutting down or moving to greener pastures.

Amazon wouldn’t be suddenly closing business locations if the problem was just the rise of online shopping.

Starbucks joins the growing list of companies that have cooled in their ardor for social justice when their bottom line took a hit.

In 2018, at a Starbucks in Philadelphia, two black men who were not customers were denied the use of a store bathroom. Officers arrested the men after the manager called the police.

This incident provoked Starbucks to conduct a companywide racial bias training program. Starbucks also opened all its restrooms for public use.

Now the company is considering reversing the policy and closing restrooms to the public because of the safety concerns, which include addicts’ drug use in the restrooms.

So, is this a return to racism for Starbucks, or is the company simply bending to the reality that there were very good reasons to limit public access to restrooms?

One would think restrooms should be primarily for employees and paying customers, not drug abusers looking for a convenient spot to shoot up. After a few years, it appears that Starbucks’ upper management is coming back to reality.

It’s interesting to see these problems hit corporate America, which in the past few years almost uniformly sided with woke causes. That commitment appears to be soft when it runs into the brick wall of woke consequences.

For cities consumed by the most ridiculous progressive policies, the bill has come due. And it looks like woke corporate allies aren’t going to stick around when it comes to picking up the tab.

Jarrett Stepman is a columnist for The Daily Signal. He is also the author of the book “The War on History: The Conspiracy to Rewrite America’s Past.” Send an email to Jarrett