They’re Paneling Paradise to Put Up Solar — a Lot 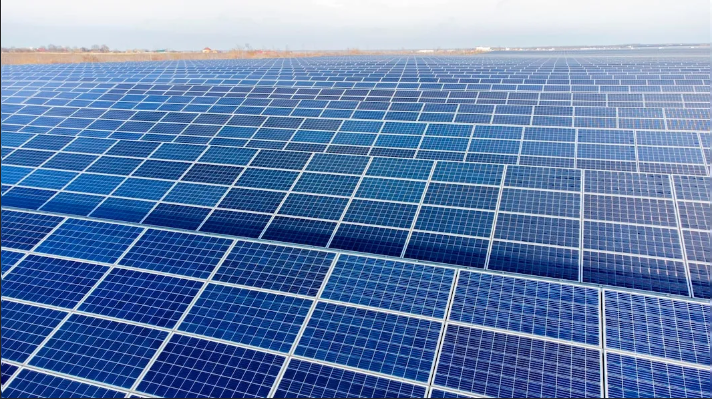 They’re Paneling Paradise to Put Up Solar — a Lot

The pathway to a green future involves taking millions of acres of pristine wilderness and turning them into fields of windmills and hot expanses of glistening panels.

The Biden administration’s goal of supplying 40% of the nation’s energy from the sun by 2035 means covering millions of acres of forest and desert habitat with vast solar panel installations fenced off like prisons. It would require 8,800 square miles of land, or 5.6 million acres, to generate that power (leaving out small installations on buildings and the like) — about the size of Rhode Island and Massachusetts combined.

But the push to convert that land from pastoral to energy-productive is galvanizing a new environmental movement, one led by citizen groups and small non-profits rather than the monied green interests arrayed against them — ones ironically accustomed to casting the fossil fuel industry in the role of the ecological heavy.

The potential impacts of solar-power installations have flown under the radar while much public resistance has centered on wind farms – which kill an estimated 1.2 million birds per year in the U.S.  and are considered loud and unsightly by many who live near their towering turbines. Even as the Biden administration has made limiting the environmental impact of oil and gas a key goal, it has opened large tracts of federal lands to solar development by major corporations including Duke Energy, Exelon and BrightSource Energy.

Solar advocates say mitigating climate change requires a switch to carbon-free energy, and utility-scale solar installations are vital to the effort. They contend a looming climate crisis requires the switch to be made quickly, although the effects of widespread solar development are not fully understood.

Numerous critics say hold on. They do not oppose a buildout of solar, but argue for more environmentally sensitive placement on brownfields, abandoned military bases, rooftops and other areas, an approach that would cost more than plunking down massive solar installations on pristine lands but do less damage. They contend that mega-solar installations are disrupting fragile ecosystems, including imperiling species of indigenous animals and flora, while ruining tourist destinations and clogging roads. Some also voice concern about the unknown long-term effects of solar power plants, such as how they age, the waste they create and concerns that heat produced by the panels could itself contribute to global warming.

But green corporate interests favor the largest and cheapest way to produce solar energy — and a number of interested parties, including resident groups, say they are getting a pass. Several of the nation’s largest wilderness advocacy groups have board members with ties to corporate solar developers, referred to by watchdogs as Big Solar. 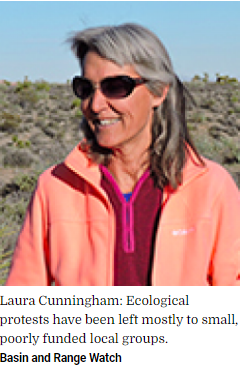 Terry Frewin, who chaired the Sierra Club’s Desert Committee for 15 years, said he stepped down from that role this year after watching what he described as the club’s leadership in Washington rolling over for Big Solar. “The big thing now is fundraising, and that doesn’t include fighting big energy,” Frewin said. “The people fighting these developments just want them sited in places that are responsible.”

A decade ago, some of the big green groups would routinely challenge solar plants along with oil drilling and fracking. But ecological protests in the past several years have been left mostly to small, poorly funded, and local groups, said Laura Cunningham, who with her husband, Kevin Emmerich, operates Basin and Range Watch, focused on protecting deserts in California and Nevada.

“The argument from these environmental groups is that big solar farms are good because they’re so clean,” Cunningham said. “That’s the standing of the Sierra Club and the others.”

Large solar energy groups are taking a page from Big Oil, she added. “These big companies come in – and some of the time they are also part of the big oil companies – and they do the same thing fossil fuel companies did years ago. They threaten lawsuits when you try to stop them, or they buy everyone out.”

The national office of the Sierra Club – whose foundation has had several board members with direct ties to Big Solar over the years – did not respond to an interview request.

More worrying to some is the speed with which these farms – fenced off tracts of land protected by barbed wire – are being pushed through despite incomplete research on the damage to the environment.

“There is a rush to do this, and research takes time,” said one federal scientist, who studies the environmental impact of solar power plants on the desert and spoke on the condition of anonymity. “So there is this lag of research and this rapid development to meet the goals of renewable energy development.”

Projects are required to gather public comments, including objections to the environmental impact of solar farm placement. The Bureau of Land Management, which has signed off on most of the desert solar plants, has denied every objection from environmental groups and individuals on desert projects going back to 2010.

Critics see hypocrisy and a dangerous inconsistency in the Biden administration’s acceptance of solar’s potential negative impacts when it’s contrasted with its efforts to curb fossil fuels.

The administration halted Trump-era moves to open up the Arctic National Wildlife Refuge in Alaska to gas and oil exploration, even though it would be limited to a relatively small area with proven safeguards in place. In addition, while approximately 1,200 to 1,500 people visit the National Wildlife Refuge each year, according to the Fish and Wildlife Service, an average of 664,000 visitors a year visit the Mojave Desert where several large solar power plants have already been constructed and more are in the works.

The administration insists it “follows the science” even though some call solar panels and wind turbines unproven, impractical, and polluting to produce.

Many of the same groups that protest Alaskan drilling, including the Wilderness Society, Defenders of Wildlife, and the Nature Conservancy, have supported sequestering desert land for solar developers. The Mojave Desert has “favorable solar energy development characteristics,” the groups noted in a 2020 letter to the Nevada office of the Bureau of Land Management. 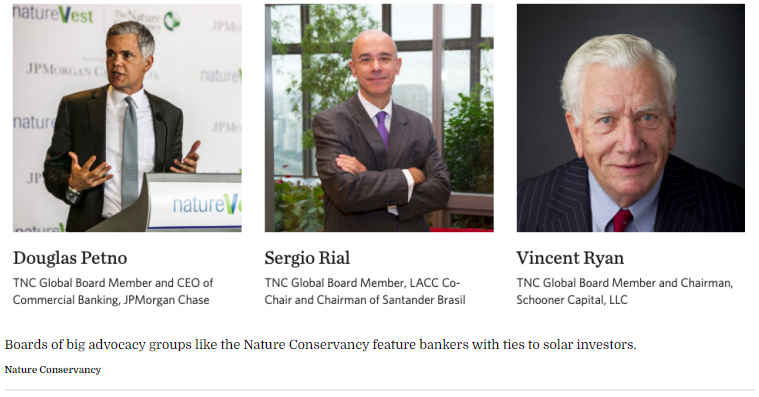 The Wilderness Society, which claims to have protected 109 million acres of outdoor space from development since 1935, has on its governing council members with ties to solar power players including JP Morgan Chase, TPG and white shoe law firm Morrison & Foerster.

The board of the Nature Conservancy, which claims on its website to “protect treasured landscapes,” includes members from JP Morgan Chase and the Carlyle Group, which last year opened its own renewable investment arm that includes solar projects.

The Wilderness Society and Nature Conservancy declined an interview request, while the National Resources Defense Council did not respond to an email.

Desert tortoise: “Solar is going to happen,” says an advocate, and “biology is taking a back seat.” 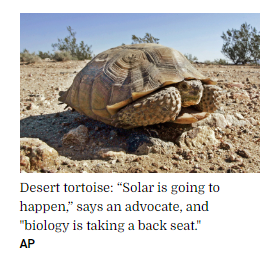 The Desert Tortoise Council, a nonprofit formed in 1975 to protect the reptile that lives in the southwest deserts, includes Ken MacDonald, an environmental engineer at NewFields, a Las Vegas-based consultancy that worked for a subsidiary of solar giant 8minute Solar Energy, a large entity with 50 solar projects.

The board is led by Mari Quillman, who works for ECorps, a consultancy that worked on a solar farm comprising six square miles of California desert next to Joshua Tree National Park and owned by several energy giants including a unit of General Electric.

“Solar is going to happen,” said Ed Larue, who joined the Desert Tortoise Council in 1990 and continues to write letters of protest over large-scale solar plants. “So, it would help if at least we have conscientious people involved that are trying to minimize the impact. I mean, Biden came into office pushing for this, and biology is taking a back seat.”

Solar power plants have also swooped in on smaller towns and marginalized communities, where they are meeting with unexpected resistance. First Solar and Duke Energy in 2020 came to tiny Archer, Florida, with plans to clear 650 acres of forest adjacent to a historically black settlement and install a solar development.

Alachua County Commissioner Chuck Chestnut noted the plan bordered on “environmental racism” during contentious hearings, and the county turned down the plan after citizens rallied to protest. 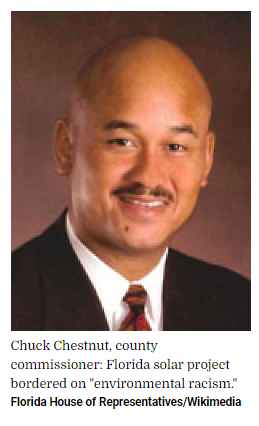 First Solar and Duke Energy appealed to state lawmakers, who overrode the protests and passed a measure giving the project – and others like it in the future – the go-ahead by preempting local communities from blocking solar power plants.

Solar projects on Native American land have prompted outcries of protest that efforts to take some property threatened to destroy “cultural resources and artifacts” that are valuable to a local tribe.

Residents in Ohio and Nebraska are also fighting large solar projects. A protest in Virginia lost out to Fortune 500 company AES Corporation – worth an estimated $10.9 billion – which is plowing under 6,350 acres for a solar power plant.

The plant, about halfway between Washington, D.C., and Richmond, Virginia, was opposed by a group of locals, who also reached out to the local chapter of the Sierra Club, which ultimately supported the development, criticizing foes in the process.

“I think these [environmental groups] run in the same circles,” said Sean Fogarty, one of the organizers of the local opposition. “They have solid goals but in this case, they were ultimately misinformed or looked the other way because they bought into renewables at the expense of the environment.”

Solar advocates concede there are unavoidable environmental problems, as “it’s challenging to site any infrastructure projects without problems,” said Lori Bird, director of the U.S. Energy Program at the World Resources Institute, a progressive environmental advocacy group. But solar, she said, “is very cost effective when compared to the alternatives, and there is flexibility as to where it can be located.”

The large-scale solar plants going up are necessary, she added, and they need to be constructed quickly. “We are seeing major impacts from climate change already,” Bird said. “There is a consensus that we need to move rapidly to carbon-free.”