NYC Releases Instructions on How to Survive a Nuclear Attack 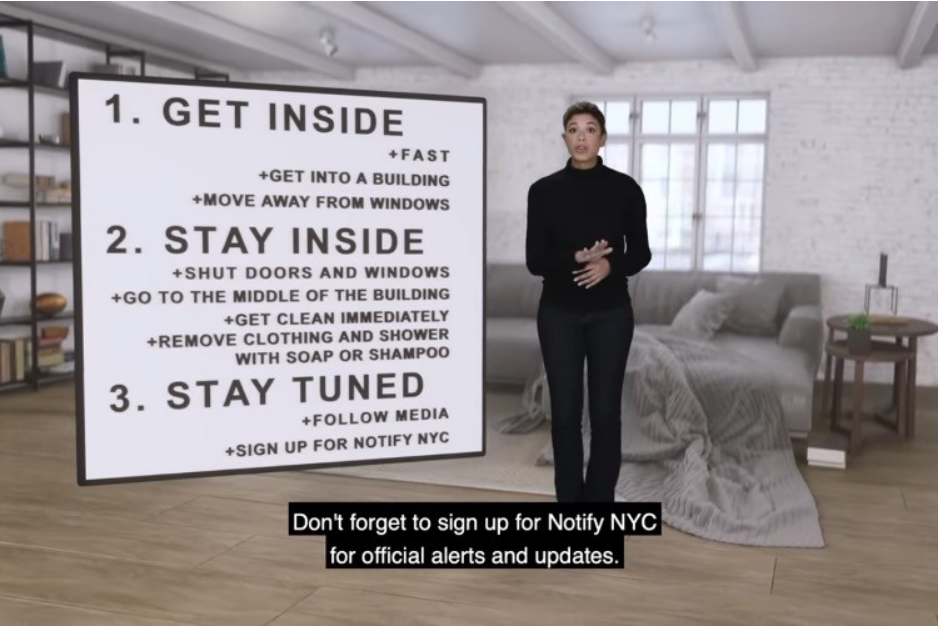 NYC Releases Instructions on How to Survive a Nuclear Attack

When Joe Biden ran for president, he promised to keep America safe from her enemies that, he believed, were emboldened by then-president Donald Trump to harm her. A year and a half later, as an epitome of Biden’s “success” in the realm of international policy, New York City is instructing its residents on what steps to take in the event of a nuclear attack, since the residents apparently feel threatened.

On Monday, New York City Emergency Management released the “Nuclear Preparedness Public Service Announcement (PSA),” which instructed New Yorkers on the emergency protocol they should follow in the event of a nuclear bomb being dropped on the metropolis. 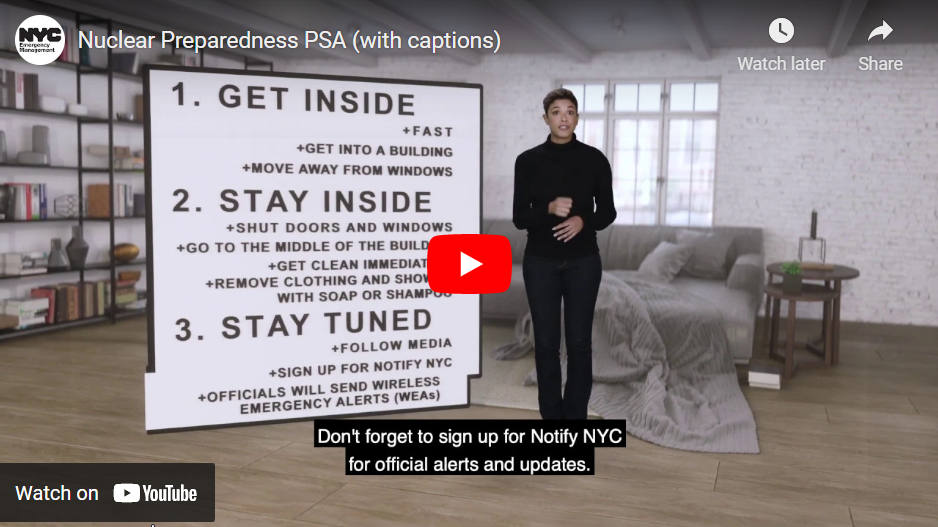 The 90-second video opens with the images of a digital recreation of New York City on a sunny day, with some destroyed buildings and sirens blaring in the background.

Speaking in simple sentences and in the firm, cheerful voice of a kindergarten teacher, the spokeswoman says, “So there’s been a nuclear attack. Don’t ask me how or why. Just know that the big one has hit.”

She continues by outlining “three important steps” that residents should take.

The very first thing to do is to “get inside, fast.” “Staying in the car is not an option,” the woman advises. “You need to get into a building and move away from the windows.”

Next, New Yorkers are cautioned to “stay inside” and to “shut all doors and windows.” Those who have basements in their homes are advised to take refuge there, while those who don’t should “get as far into the middle of the building as possible.”

If a person happened to be outside during a nuclear blast, the advisory urges such people to remove their clothing, store it away, and wash themselves with wash or shampoo “immediately” to “keep radioactive dust or ash away from your body.”

Finally, the narrator tells viewers to “stay tuned” and “follow the media for more information” and to sign up for “Notify NYC” for official alerts and announcements. Most importantly, stressed the narrator, residents should stay inside “until officials say it is safe.”

“Alright? You’ve got this,” the spokeswoman concluded reassuringly.

The video omits the fact that most communications systems in the city, except for the radio, would be knocked out by a nuclear blast. Therefore, clutching one’s cellphone and waiting for official announcements and directions would be useless.

It also doesn’t say that for anyone outside when a nuclear warhead detonates, getting inside and taking a shower would be the least of their worries.

The eerie announcement was accompanied by a press release, saying,

While the likelihood of a nuclear weapon incident occurring in/near New York City is very low, it is important New Yorkers know the steps to stay safe. The new PSA encourages New Yorkers to take key, simple steps in the event of such an incident.

New York City Emergency Management Commissioner Zach Iscol added, “As the threat landscape continues to evolve, it is important that New Yorkers know we are preparing for any imminent threats and are providing them with the resources they need to stay safe and informed.”

Speaking with the Associated Press, the city’s emergency management deputy commissioner, Christina Farrel, noted the video wasn’t “tied to any specific threats” and was meant to “raise awareness of something most people haven’t given much thought.”

According to the report, the proposed instruction was “just one tool in the toolbox to be prepared in the 21st century.” Or, one could add, what very concrete forces are shaping the 21st century to be, even if it is a nuclear holocaust.

Farrel said her department did not mean to scare people, and that there is never “the perfect moment to talk about nuclear preparedness,” yet it needs to be done. She added that city officials have discussed implementing nuclear guidelines for “quite some time.”

In an interview with 1010 WINS, Farrell added that the instructional video was released in response to popular demand from the city’s residents.

According to the outlet,

Emergency Management has been surveying New Yorkers about what threats they feel most prepared for.

She said that, “Understandably, people report that this is an event that they feel the least prepared for….  I don’t know if there’s ever a great time to put out a nuclear preparedness PSA, but it is very important, and we want New Yorkers to be prepared — so no time like the present.”

New York mayor Eric Adams praised the work of the emergency department, saying that it is better “to be safe than sorry.”

While Farrel did not make any links to the international developments that could require America’s largest city to “get inside” and scrub off the nuclear dust, Adams did.

“This was right after the attacks in the Ukraine, and OEM took a very proactive step to say let’s be prepared,” he told the press.

If Farrel is being truthful, and New Yorkers are anxious that their city would be hit with a nuclear strike, then what shaped such fears? Wasn’t America meant to be “safer than ever before” under the leadership of Joe Biden, who talked so much about his experience in foreign affairs while on the campaign trail?

“Under his [Trump’s] leadership, America’s reputation and influence are in tatters. Our country is less safe, our economy more fragile, and our democracy, values, and unity endangered,” Biden lamented in 2020. That was all because Trump was “Putin’s puppet,” and Biden said he would take a firm stand against the Russian leader if elected. Biden and his administration were supposed to “Build Back Better” everything in America, starting with the economy and our international relations. Yet today, America’s largest city is almost returning to the “duck-and-cover” drills of the 1950s. Keep calm and mail your ballot.