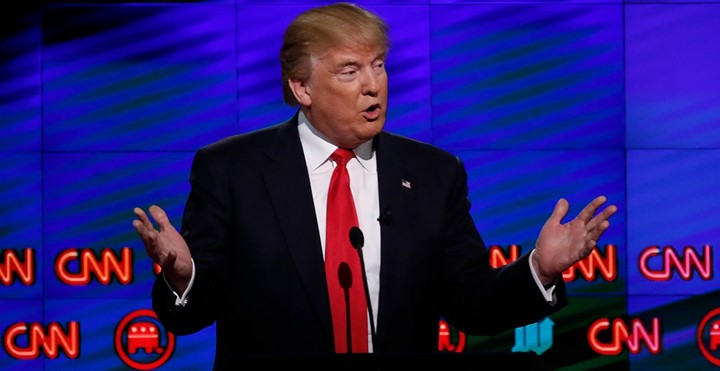 One former CNN analyst said of the network: “If you bash Trump, you can be political… If you dare push back the other way, you’re just not going to get airtime.” Pictured: Then-presidential candidate Donald Trump speaks during the CNN debate in Miami on March 10, 2016. (Photo: Rhona Wise/Getty Images)

During my time in the White House press corps in 2001 and 2002, the press secretary was Ari Fleischer. He was the definition of mild-mannered and unflappable for President George W. Bush. But he would tell you the reporters were less confrontational back then.

Their aggression has grown so dramatically that Fleischer wrote a new book titled “Suppression, Deception, Snobbery, and Bias: Why the Press Gets So Much Wrong—And Just Doesn’t Care.” That sounds harsh, but if they cared, wouldn’t they try to fix their fact-mangling tilt? They have shown no interest in it.

My favorite chapter is about CNN. Fleischer notes he was a contributor there from 2011 to 2013, when it seemed a little more like “straight” news—at least compared with its incessant attacks on everything relating to Donald Trump.

Even personnel decisions demonstrated how deeply CNN loathed Trump. In 2019, when they announced the hiring of Sarah Isgur, who had served in Trump’s Justice Department, as a political editor, there was a nasty internal freakout. She had no journalism experience. The Daily Beast reported CNN employees were “upset and confused” that CNN would hire a “partisan political operative.” Brian Stelter reported employees questioned it as an “ethical breach.” CNN backed down and named Isgur a CNN analyst, not a political editor.

Fleischer points out there was no such freakout when CNN announced on Jan. 19, 2017, that top Obama aide Valerie Jarrett’s daughter Laura joined CNN as a Justice Department reporter—with no journalism experience. She’s now a morning anchor.

Another example is former FBI agent James Gagliano, who was hired as a CNN analyst in 2017 after he appeared on CNN to attack the firing of FBI Director James Comey. He told Fleischer he was quite critical of Trump in the initial part of the Mueller probe, but his opinion changed as new details emerged of overt partisanship by FBI employees Peter Strzok, Lisa Page and Andrew McCabe. After the Justice Department’s inspector general called out this behavior, Gagliano thought, “I’ve got to take a position and criticize the FBI here. I have to call this straight. Once I started doing that, I got moved off those issues.”

Suddenly, Gagliano was mostly analyzing crime stories on CNN’s Headline News channel. He was essentially replaced by Josh Campbell, who was hired straight from the CNN public relations office, and he continued sounding like a PR agent for Comey. CNN then promoted Campbell to being a reporter, not just an analyst. McCabe also joined CNN as a contributor, despite being caught lying to investigators about his press leaks.

As he was spending time on the CNN bench, Gagliano made his opinions known on Twitter, like approving of NFL quarterback Drew Brees standing for the national anthem. He said CNN executive Rebecca Kutler called to tell him to knock it off: “Your job at CNN is to be a law enforcement analyst.” He said he replied, “But you don’t use me” and pointed out the opinionated anti-Trump tweets from other CNN personalities. Kutler shot back, “You need to watch your social media.”

Gagliano was grateful for his CNN tenure but concluded the lesson was, “If you bash Trump, you can be political… If you dare push back the other way, you’re just not going to get airtime.”

Fleischer insists the American people deserve a media that won’t engage in suppression of news it hates and deception in overselling stories it loves. The people who aren’t as liberal as the press deserve respect, not snobbery. They deserve it, but it’s unlikely they’ll get it.

Tim Graham is director of media analysis at the Media Research Center and executive editor of the blog NewsBusters.org.