CANCEL CULTURE IS CANCELLING ITSELF 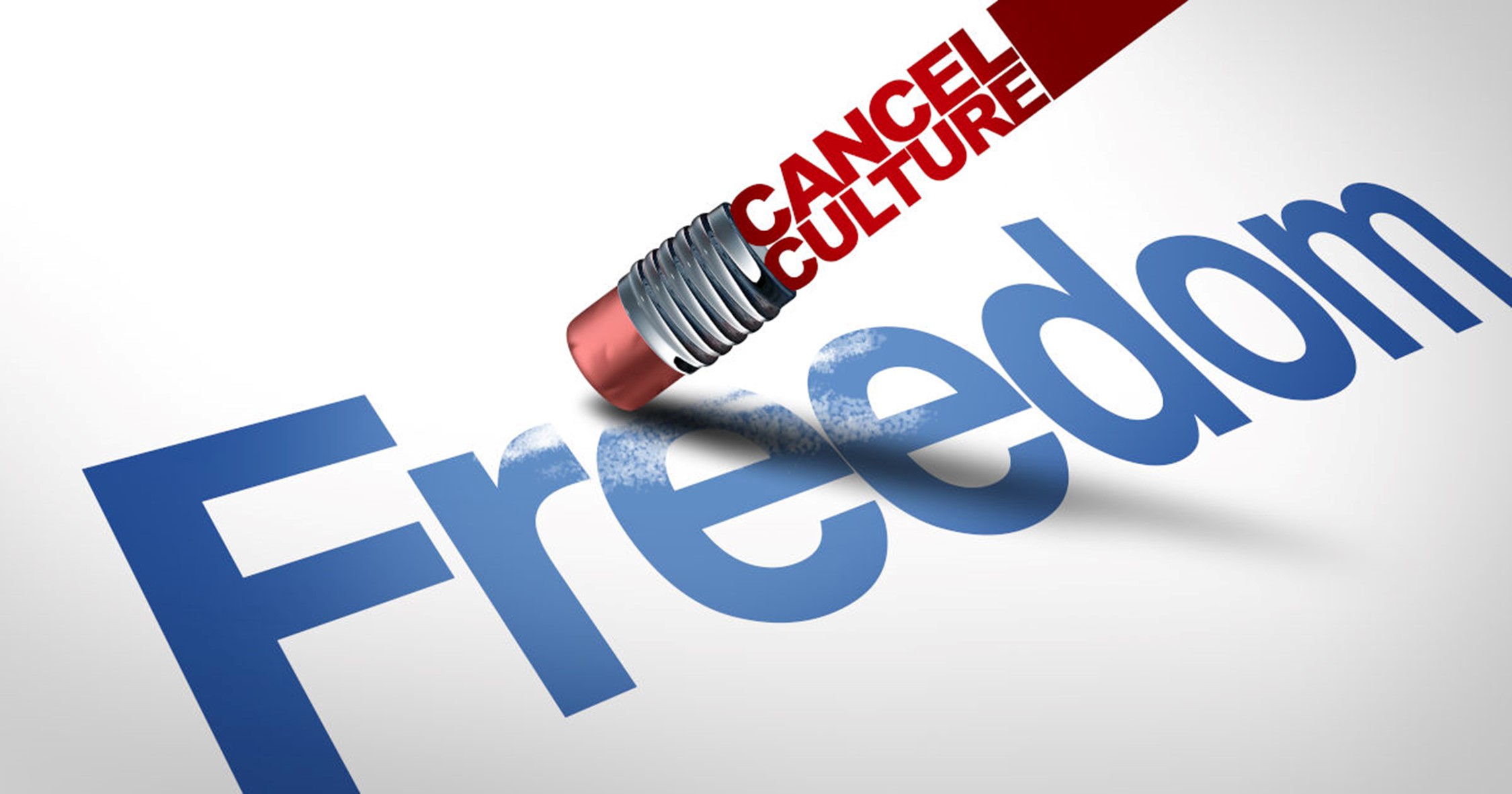 CANCEL CULTURE IS CANCELLING ITSELF

We are definitely living in interesting times. I’d have preferred the 1770s, but I’m here now. For decades we at American Policy Center have been arousing people to see what is actually going on in the world rather than being duped by the globalists’ propaganda arms, the MSM and the education system. Many people are opening their eyes, but that fact has been hidden by the press. Now, the Globalists, with their Cancel Culture, are opening more eyes than imaginable thanks to their hubris. They began to believe their propaganda – gotta love it! – and thought they had ‘turned’ enough of us into gullible fools or useful idiots.

They, the Globalists, are telling us meat, milk, tuna fish (and anything else natural, except centipedes) are killing us. So, we need to eat bugs to be healthy. Uh huh. I laughed. Even many deeply duped Leftists are gagging on that. How many cockroaches does it take to supply one gram of protein? And will they expect us to eat termites? Probably, because that would be one thing that would help reduce our carbon footprints – termites are more destructive to ozone than cow farts! Bon Apetit, Leftists. I will stick with red meat; I like to have a functioning brain.

Seriously, though, those wishing to take control of the world will help us bring themselves down like all previous wannabe masters of the universe. Yes, they have seduced a sizable portion of the population, but it is not as sizable as they would have us believe. The Globalists have studied, plotted, planned, and tested their hypotheses ad nauseum, but just like Communism, they cannot factor in, let alone control, all the variables needed. Maybe they expect to metamorphose themselves into God via Transhumanism. Good luck!

That doesn’t mean we aren’t in for, probably, the most horrendous times this Earth has ever seen. Noah and Lot were witnesses to cataclysmic events but, because the world now has billions of people, and because the Globalists are ‘all in’ for “whatever it takes”, we will be subject to a truly dystopian world.

While WW I was the “war to end all wars” but didn’t put off a worse war for much more than 20 years, we have been living in WWIII for decades. We didn’t notice because very few guns and no tanks or rockets have been used – yet. This is a war using the asymmetrical weapons of dumbing down, brainwashing, programing, psychological warfare, gaslighting, promoting fear and paranoia, fake pandemics, weaponized “medications”, destroying small businesses through shut-downs, allowing rioting by paid radicals, plus cancelling our culture and replacing it with fake and corrupting values, attitudes, and beliefs. Oh, and there are many, many more weapons being used against us. Obviously, the Globalists figure if we are aware of and fight off 500 of them, one of the other 9,000 should get us, amongst which are:

ESG (environmental, social, and governance) investing which, according to the U.S. Securities and Exchange Commission, means:

ESG practices can include but are not limited to, strategies that select companies based on their stated commitment to one or more ESG factors —for example, companies with policies aimed at minimizing their negative impact on the environment or companies that focus on governance principles and transparency.  ESG practices may also entail screening out companies in certain sectors or that, in the view of the fund manager, have shown poor performance with regard to management of ESG risks and opportunities. Furthermore, some fund managers may focus on companies that they view as having room for improvement on ESG matters, with a view to helping those companies improve through actively engaging with the companies.[1]

In simple English, that means if your company doesn’t toe the Marxist, Agenda 21/2030, Sustainable, anti-freedom line, you will be cancelled (or just ignored, shunned, and ridiculed until you learn to follow Big Brother or fail).

This, now, is combined with modern monetary theory (MMT), which only a person educated in our institutes of higher learning now can possibly comprehend. MMT contends that government can create more money – without any backing – just because it needs the money to support the federal spending on ESG issues (along with providing billions for war materials to Ukraine) and and and. Through these weapons, the Globalists are making our money worthless in order to continue wiping out the Middle Class. The COVID lockdowns made major inroads on that goal; this is to finish us off.

Add technocracy to the cache of arms, and they now have a mega-weapon in economics. While technocracy, like MMT and ESG, is made out of whole economic cloth, it, too, is an “invented and unnatural form of economics that expresses itself as totalitarianism and requires social engineering to work. Technocrats in the past defined technocracy as the science of social engineering; controlling the populace is crucial for the system to function.” [2]

Their plan is to not only change governance, but to physically change us humans, to “computerize” us. Then they can not only know everything we do when we do it, they can design us to do what they want us to do – even to die if we are useless eaters (or considered such by the global elite like Gates, Schwab, and their useful idiots – too many to list (starting with Fauci).

And don’t overlook PSYOPs, designed by the military for psychological warfare. Who knew they would use it on their own people (snark)? As Wikipedia states:

Psychological operations are operations to convey selected information and indicators to audiences to influence their emotions, motives, and objective reasoning, and ultimately the behavior of governments, organizations, groups, and individuals.

Television and movies were major tools in the PSYOPS bag, then they discovered they could use the make-believe of those media and feed it to the people as news. Why were so many so easily fooled? I would guess that one of the reasons is because just about every outlet in print and video was coopted. So-called journalists are now just talking heads, parroting what they are fed. And few notice or care. GIGO should be the buzzword of the day. A perfect example: many people believe the puppet regime in Ukraine is poor, picked on, and pure as the driven snow. They have no idea what is going on in that part of the world, the maneuvering vis a vis NATO, the oil issue, the displaced Russian population of Ukraine. If MSM’s greenscreen slips and shows the 2x4s holding up the screen, they don’t notice. The woke are not awake, they are hypnotized.

And pseudo Climate Change, the raison d’être. The Globalists, along with their cohorts, the Deep State, are pushing electric cars when they know that 1. they cannot produce enough batteries to supply the world with electric cars, 2. there are gross human rights violations occurring in the Democratic Republic of the Congo, 3. power to charge the batteries comes from electric power plants, and 4, last but certainly not least, these batteries are very damaging to the environment. But most of us realize that the issue isn’t the issue. It isn’t about developing sustainably, it is about bankrupting the middle class (who can afford these cars?) and driving people into Stack n’ Pack housing so they are easier to control.

Add to the list the sequestration of carbon, solar and wind power, “brownfielding” minority neighborhoods to drive the people out of their homes and businesses; there are dozens, if not thousands, of other weapons being used against us.

I was listening to a novel based in Shaker Heights, Ohio, the first planned community established in 1912. It was scary. The designers, the Van Sweringen brothers, were Shakers and railroad mogels (think James Hill, Jay and George Gould, Cornelius Vanderbilt, Edward Harriman, and Collis P. Huntington). The scary part is that, even then, people wanted to plan how everyone lived – and now, where and if they work, where they recreate, and if they are allowed to procreate.

We are being programmed to want to conform, not to stand out. When I was growing up, it was expected that we try to excel, stand out above the crowd. Now, we are to be a crowd – and if we are really good, we will be an unruly, angry, vengeance-seeking crowd (seeking vengeance for unknown atrocities committed in someone’s imagination.

If we truly want to fit in now, we must be indistinguishable from everyone else – Mao jackets, e-cigs instead of joints, tats instead of love beads, and multi or asexuality instead of sex, drugs, and rock n’ roll. But those were the start.

The scariest part for me is the fusion centers. We are being inundated with propaganda promoting the support of locking those up who disagree with the Sustainable Development lines promoted by the Globalists – and even those who want to own their own home on their own property un-supervised by a homeowners association. MSM watchers are becoming inured to hordes of rioters, a police state, and even their fellow citizens being locked-up for daring to speak out against Newspeak.

As I noted earlier, it is quite unlikely that the Globalist plan will pan out as they have so meticulously and duplicitously scripted. But dystopian will be descriptive of our everyday world, not a scene from a sci-fi novel. To make it somewhat less destructive, we need to now be working to stop the wheels of the Great Reset progress.

As Kat Stansell, Grassroots Outreach Coordinator for American Policy Center says, “Local action is the only way out of this. We’ve said it before, advocated for it, and built groups around the nation who have done some really good things. If you already have a Freedom Pod in your community, you are a step ahead, but now we must all go much further. We must build Freedom Rescue Platoons.”

It is simple, and if you love what America was and can be again, you will find that it gives you a great sense of accomplishment every time you shut down one of useful idiots working so hard to destroy freedom for slavery. Give it a try.