MUST-READ, MUST-WATCH: The Real Victims of January 6: Those Who Went to the Capitol to Stand for What Was Right 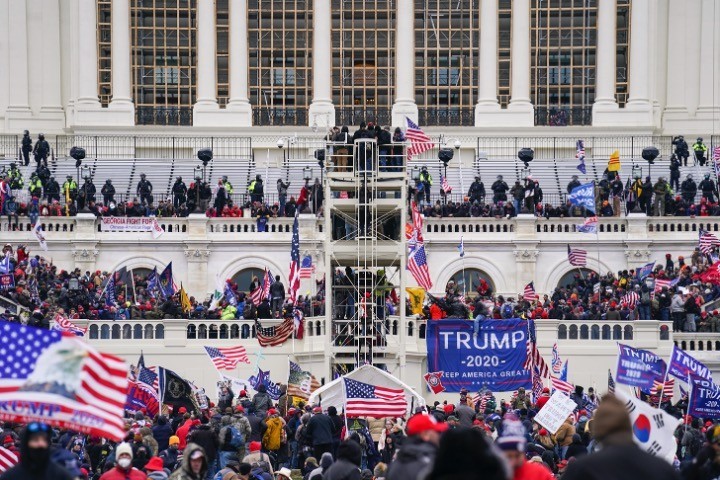 MUST-READ, MUST-WATCH: The Real Victims of January 6: Those Who Went to the Capitol to Stand for What Was Right

Journalist Julie Kelly (January 6: How Democrats Used the Capitol Protest to Launch a War on Terror Against the Political Right) is one of those rare, intrepid reporters who will dare to speak the truth when hundreds of thousands who also recognize the undeniable reality are too fearful to speak up and thus remain silent.

“January 6 was an inside job to entrap people who attended Trump’s speech,” stated Kelly in an interview with The Epoch Times’ “Facts Matter” host Roman Balmakov.

Now, amid the debut of the notably dismally viewed six-part-planned, prime-time January 6 “witch hunt” committee hearings this week, Kelly’s assertion is drawing increasing support following the release of a raw and harrowing new documentary, The Truth About January 6th.

The brief but important 45-minute film, originally published on The Gateway Pundit, highlights the disturbing oddities of “Insurrection Day,” capturing compelling, historic video of a mostly peaceful crowd of Trump supporters being enticed, entrapped, and then attacked by not only Capitol Police, who ushered in thousands of protesters to the Capitol building, but also many still unnamed and unidentified individuals screaming into the crowd to storm the Capitol, “To Go In!”

The narrator of the film, Edward Jacob “Jake” Lang, is a January 6 defendant who, in multiple scenes, appears to be helping others in the crowd avoid being trampled by a mob rushing into the Capitol building.

As the film outlines the events of the four-hour disturbance at the Capitol that day, viewers will decide for themselves what really happened in the wake of Donald Trump’s “Save America” speech, which, in his signature style of common sense and true grit, drew millions of people to the Ellipse park in Washington, D.C., just south of the White House.

Who Is the Accused Jake Lang?

Lang, now 27 although arrested at age 25, hails from Upstate New York. He was arrested on January 16 in New York and charged with multiple crimes related to his participation in the protest in Washington, D.C. on January 6. He is considered a “threat to society” and accused of assaulting police officers using a dangerous or deadly weapon during the Capitol breach.

“The government’s evidence against him appears to be strong,” reported Kelly back in May 2021. Though Lang has pleaded not guilty to all charges, he remains holed up in a jail in Alexandria, VA, awaiting trial on January 9, 2023.

Since his arrest, Lang has spent more than 530 days behind bars.

“January 6 will be remembered as one of the darkest days in American history,” writes Kelly in her revealing new book, January 6: How Democrats Used the Capitol Protest to Launch a War on Terror Against the Political Right. “But not for the reasons given by Joe Biden, the Democrats, the news media, and Never-Trumpers…. It will be remembered as a dark day because it swiftly became a pretext for the accelerated weaponization of the federal government to target U.S. citizens on the Political Right.”

In the hours and days after the protest, Kelly argues, “the FBI relied in some cases on emergency orders that do not require court authorization to quickly secure actual communications from people who were identified at the crime scene.”

Presuming this is true, the FBI was surveilling, through geolocating, lawmakers as well as average citizens ahead of, during, and after January 6.

Convincingly, a stone-cold response by an FBI agent to Senator Ted Cruz during a congressional hearing in January of this year was nothing short of astounding, as the agent refused to answer questions as to whether FBI agents were present at the Capitol, whether they committed any crimes, or whether they were involved in any way in the events of the day. 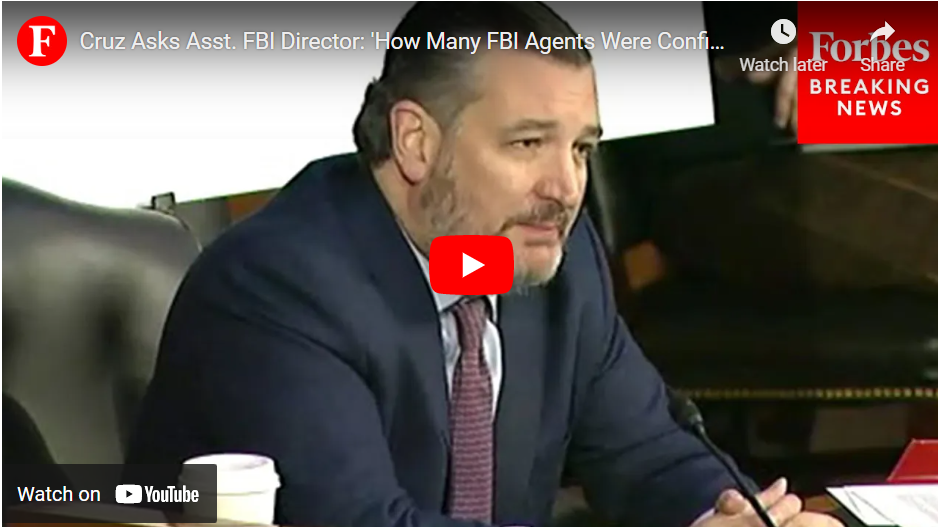 What the Hearings Leave Out

Many other vital films that evoke the facts of January 6 that the mass media will otherwise obfuscate from the American public have been released in the past two years.

Acclaimed producer and director Nick Searcy’s Capitol Punishment and Fox Nation’s Patriot Purge dare to expose the truth hidden from the public, but Lang’s deeply personal look at the events of the day uniquely hones in on the extreme weaponization by the U.S. government against the American Right, as Kelly reaffirms consistently in her reporting.

One excellent aspect of this film is the juxtaposition of dozens of mass-media clips that illustrate the soft treatment of the truly violent protesters during the rampant, deadly riots and savage lootings following the death of George Floyd during the summer of 2020, versus the vicious arrests and gulag-style incarceration of Trump supporters who protested at the Capitol.

Black Lives Matters and Antifa protesters who defiled and destroyed public property costing billions of dollars and abused and fought savagely with the intent to kill police have been released — or in many cases were never charged. Certainly, they are not unfairly and inhumanely still rotting in solitary confinement with no constitutional right to a speedy trial despite having been convicted of no crime.

Antifa rioters burned down small businesses (many minority-owned), set police cars ablaze in the middle of busy traffic intersections, and spat on diners enjoying outdoor meals for which they paid — yet none of these “protesters” has been labeled a “domestic terrorist” by the Department of Justice or the president of the United States.

There are even killers still at large for the brutal death of retired St. Louis Police Captain David Dorn, who was gunned down while protecting a pawn shop during a mass looting.

These criminals have seen no threats to their lives as has Lang, as depicted in the documentary. If found guilty, Lang could face decades in prison for his alleged “crimes.”

Lang’s attorneys Martin Tankleff and Steven Metcalf told reporters this past January that “Lang’s physical abuse [in jail] includes being dragged, shoved, denied regular shower access, and getting an entire can of mace in his face, while standing inside of (his) cell with photos and a bible in his hand.”

Lang’s film is chock-full of graphic clips of Capitol Police repeatedly and brutally beating protesters over the heads with batons. In one scene, the police appear to take the life of a 34-year-old Georgia woman, Rosanne Boyland, the first victim to fall and die amid the crushing of bodies of protesters trying to avoid pepper spray from police.

Lang states in the film that Boyland ended up dying in his arms. Viewers watch as her seemingly lifeless body is dragged from the building.

By design, the theatrical J6 committee hearings, which Wyoming’s Liz Cheney herself described as not a “court of law” but a “court of politics,” are designed to portray the 45th president as the instigator of the so-called insurrection, though not one of the protesters at the Capitol that day was armed.

Lang said of his film that “the truth is out there via J6Truth.org.” Noting to One America News from his jail cell in Arlington, Va., that over six months, thousands of hours of footage have been unearthed to show some of the most “brutal and grotesque videos” of Capitol Police, many of whom threw chemical-filled grenades into the crowds.

This Isn’t About Trump; This Is About Destroying American Liberty

“The [January 6] hearingmis the same as going into a courtroom and only having the prosecutors tell their side of the story,” said Lang. “There’s a reason why they are purposefully doing this one-sided story…. They don’t want Donald Trump to run in 2024 and bring back American liberty…. That’s what we were all there for on January 6, 2021, to defend our country and to defend American liberty. Nobody brought weapons.… We were there to peacefully protest and to stand up for our republic…. Our whole entire goal was to make our voices known, to redress our grievances with our elected officials, and they totally overshadowed us. They didn’t care that millions of people gathered, that tens of millions of people thought the election was stolen.”

“I am leaning all of my concentration and power into my faith in God right now. He is getting me through 22 hours a day in solitary confinement, that I have been in for about 530 days now…. There is … social deprivation; no religious services, no haircuts, no access to see the sun…. I have had no visitation from my family since I’ve been locked up. Political prisoners don’t get to have hugs from their mom and dad…. There’s a two-tiered justice system in America now.”

How Long Will the People “Take It”?

“But I think right here we’re going to walk down to the Capitol and we’re going to cheer on our brave senators and congressmen and women…. I know that everyone here will soon be marching over to the Capitol building to peacefully and patriotically make your voices heard,” Trump told the crowd.

On January 6, as Lang’s film claims, Capitol Police were understaffed and undermanned, despite multiple calls from Trump for more reinforcement. Horrific, graphic footage shows Capitol Police officer Lila Morris repeatedly beating a lifeless Rosanne Boyland over the head with a baton, yet Officer Morris was not charged with any crimes.

Capitol Police Officer Michael Byrd’s lethal actions against Air Force veteran Ashli Babbitt were found lawful and within the jurisdiction of the Capitol Police. He was also cleared of all charges.

Protester Benjamin Phillips died from a heart attack after he was struck by a flash-bang grenade thrown into the crowd by Capitol Police.

Kevin Greeson also fell victim to the barrage of grenades thrown into the crowd by Capitol Police.

According to Lang’s film, there were a total of four deaths at the hands of the Capitol and Metro Police on January 6. Once inside the Capitol, protesters can be heard stating loudly, “this must be peaceful; remain calm. We are here to discuss what is going on and to save our country.”

“The insurrection was November 3, Election Day,” said President Trump in an interview. “The protest was about a rigged election.” But as Couy Griffin, a January 6 defender and founder of Cowboys for Trump, comments in Lang’s film, “America, you deserve the full truth. Jake Lang is an American hero, who pulled two people out of a pile of wreckage where people were being crushed. You deserve to hear the full story of January 6 beyond the censored lens of the mainstream media.”

Ned Lang, Jake’s father, expressed a moving sentiment about his son and all those who continue to languish in D.C. jail cells designated for political terrorists.

“It’s cold as hell in here,” is a striking line from a letter Jake wrote to this father, which Ned Lang reads at the end of the film. “This is my desert, I must cling to my faith sustained by the Word of God.”

“Fear Does Not Live in the Hearts of Patriots”

As noted in an interview with Blexit founder and Daily Wire talk-show host Candace Owens, speaking of the January 6 defenders, President Trump remarked, “you have to have equal justice. It’s very, very unfair what’s happened to this group of people.”

When asked by Owens if he would have given the political prisoners pardons, Trump said, “I would absolutely give them a pardon if the punishments were not given out fairly … out of proportion, like 20 times out of proportion. These people are being persecuted and the other ones they caught who killed people they want to give them minimum sentences. You have to have equal justice, and this isn’t equal.”

But Lang is not living in despair. He has been in jail since late January, but “fear does not live in the hearts of Patriots,” he says resolutely in the film.

To learn how to support the Lang family, visit: J6Truth.org.