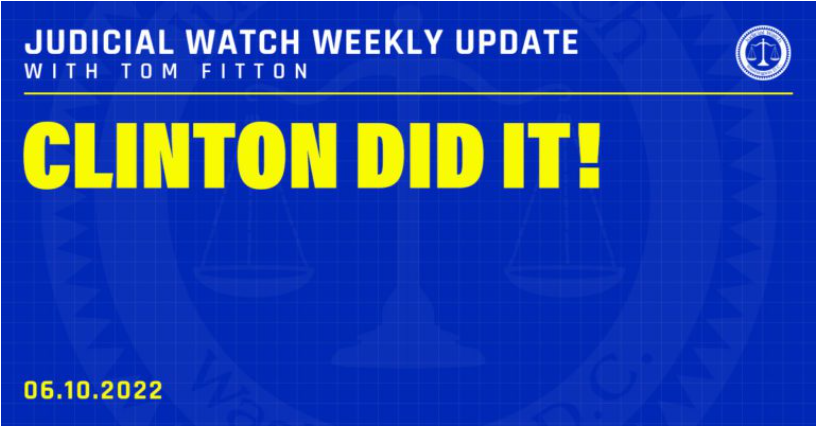 John Durham surely wishes he could have had a better venue than the District of Columbia when he put Hillary Clinton’s campaign lawyer on trial for lying to the FBI. The acquittal nevertheless further exposed Hillary and her FBI partners as corrupt. Our chief investigative reporter, Micah Morrison, reports on the latest in Judicial Watch’s Investigative Bulletin.

Hillary did it. And the FBI helped.

That’s the Occam’s Razor conclusion behind court action in Washington last week that added new details to a growing mountain of evidence about the true forces behind the sensational “Russia collusion” allegations that nearly brought down the Trump presidency.

John Durham, the special counsel appointed to investigate the Russia mess, lost his case in a DC courtroom. The jury acquitted Washington attorney Michael Sussmann, a DC insider with deep connections to the Democratic Party and the intelligence community, on the only charge Durham managed to bring: a single false-statements count alleging that Sussmann lied to the FBI when he brought it allegations of a link between Trump and Moscow’s Putin-connected Alfa Bank.

Why did the DC jury acquit Sussmann? As Judicial Watch President Tom Fitton tweeted last week—politics in the heavily Democratic district aside—the “simplest answer is the evidence— which suggested the Obama FBI leadership knew full well the Clinton gang was behind the Alfa Bank-Russia smears of Trump. Durham tried to pretend Obama FBI was a victim. It was a co-conspirator.”

Sussmann’s defense relied on the preposterous claim that the attorney—a former Justice Department cybersecurity prosecutor, lawyer for the Democratic National Committee, and adviser to the Clinton presidential campaign—was merely acting as a “good citizen” when he sought an urgent meeting with FBI General Counsel James Baker to pass along the Alfa Bank tip. Sussmann came to the meeting highly prepared. His indictment notes that he offered Baker “three ‘white papers’ along with data files allegedly containing evidence supporting the existence of this purported secret communications channel” between Trump and Alfa Bank.

Baker knew Sussmann well. It emerged at trial that Sussmann did not even need a pass to get into the highly secured FBI headquarters for his meeting with Baker—he already had one. Evidence also showed that Baker, tasking FBI subordinates with investigating the Sussmann tip, withheld Sussmann’s name—a suggestion that maybe not everyone at FBI HQ would view an allegation from a DNC insider on the eve of a presidential election with such credulity. In trial testimony and earlier interviews, Baker suffered convenient memory lapses and uncertainty about what Sussman actually said, opening a path of reasonable doubt for the jurors.

There’s no doubt, however, that one of Sussmann’s clients was the Clinton presidential campaign, and Durham established that it was deeply involved in the Alfa Bank smear. Durham showed that the Alfa Bank allegations were cooked up by Clinton campaign allies and operatives, including the investigative firm Fusion-GPS—the key force behind another sensational Clinton smear, the Steele Dossier. Prosecutors introduced evidence showing Sussmann billed many hours to his law firm for meetings with Clinton campaign officials on Alfa Bank.

In bombshell testimony, former Clinton campaign manager Robbie Mook said Mrs. Clinton herself authorized giving the Alfa smear information to the media. Under oath, Mook described a conversation with Clinton about the Alfa Bank material, telling her, “hey, we have this and want to share it with a reporter.”

Mook added, “she agreed to that.”

Not only did Clinton agree, she enthusiastically supported the story when it was published on the left-wing website, Slate. She tweeted a link to the piece with the comment, “it’s time for Trump to answer serious questions about his ties to Russia.”

Campaign adviser Jake Sullivan—now President Biden’s national security adviser—chimed in, issuing a statementdeclaring, “This could be the most direct link yet between Donald Trump and Moscow. Computer scientists have uncovered a covert server linking the Trump Organization to a Russian-based bank.”

Calling it a “secret hotline,” Sullivan prodded the FBI, saying he could “only assume federal authorities will now explore this direct connection between Trump and Russia as part of their existing probe into Russia’s meddling in our elections.”

Later this year, Durham will take a closer look at that other infamous smear, the Steele Dossier. Durham indicted an alleged key source of the dossier, Ivan Danchenko, on five counts of lying to the FBI. Danchenko has pleaded not guilty. It seems likely Mrs. Clinton, her associates, and the FBI will play a central role in that prosecution, too.