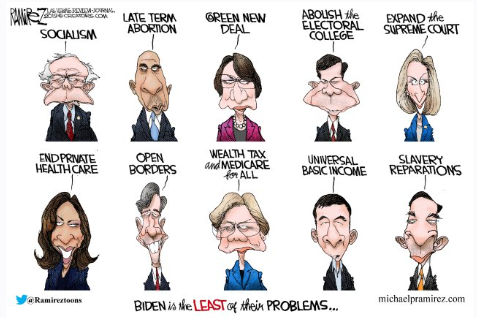 Among all the Democrats in this great country there are surely a few with good old common sense, or at least an inclination to dig a little deeper to find out the facts.

Just as important you would expect that at least a few Democrats would be Christians who believed their Bibles. The Bible makes it clear that there are only two sexes, male and female, and the rest of these so-called genders are just someone’s idea of a joke.  And there are no legitimate gays in the Bible; in fact, sodomy is considered a serious sin in the Bible.

But, even if you do not happen to believe the Bible, or even read it, surely you have enough common sense as to recognize that many of the things the present administration is attempting to do simply will not work.

President Biden wants to eliminate fossil fuels (coal, oil, natural gas).  It is evident that he has no understanding of just how important these energy sources happen to be.  Even more than that, does he realize that much of our fertilizer is made from natural gas?  Without this precious fertilizer our food crops would be greatly reduced, and many could starve.

Coal is plentiful in America, and it is used in the making of steel, and in the production of electricity.  Wind and solar, which presently provides less than five percent of our electricity, will never replace coal and natural gas.

Think about oil.  Right now, the price of gasoline is over five dollars a gallon.  It was under two dollars a gallon under President Trump. Wind and solar are totally impractical because there are times when the sun does not shine or the wind blow.  During those times natural gas fired generators make up the difference.  What will happen when that energy source is no longer available?  And batteries, which are very expensive, can never make up the difference.

Fossil fuels are what made America great, especially oil.  Do the Democrats understand that there are over 6,000 products that we use daily that are made from oil?

I was recently driving near my home and observing the number of homes surrounded by vinyl fences.  And almost every new home built in North Idaho is sided with vinyl siding.  What will happen to these products when oil is no longer available?

The Biden Administration is totally separated from reality.  They cut off work on the Keystone XL oil pipeline, stopped work in Alaska and on federal lands, and then wondered at the high price of gasoline.  They spent trillions fighting covid 19; trillions they did not have but created out of thin air.  Then they complained about rising prices, when they were the only ones who could cause prices to rise.  Only the government printing more money can cause inflation.  In fact, that is the definition of inflation, an increase in the money supply.

Again, I have to wonder that there are not at least a few Democrats with common sense.  Anyone who truly wants simple answers needs to read my simple little book: Climate Change: A Convenient Truth, available where books are sold.

If we have hope for America then we need to convince our Democrat friends about the importance of fossil fuels.  There can be no other solution for a progressive society.