Drag Queen Event For Kids Canceled After ‘Feedback From Citizens’ 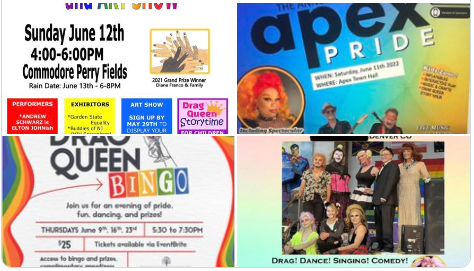 Drag Queen Event For Kids Canceled After ‘Feedback From Citizens’

The mayor of a North Carolina town announced Saturday that a Drag Queen Story Hour event, part of an upcoming pride festival, was canceled after receiving “feedback from citizens.”

Jacques Gilbert, mayor of Apex, North Carolina, announced Saturday via Facebook that the previously planned Drag Queen Story Hour was canceled one week before the Apex Pride Festival, citing citizen feedback. Gilbert shared the feedback he received to the Apex Festival Commission, who then took it into consideration and removed the program, his announcement stated. 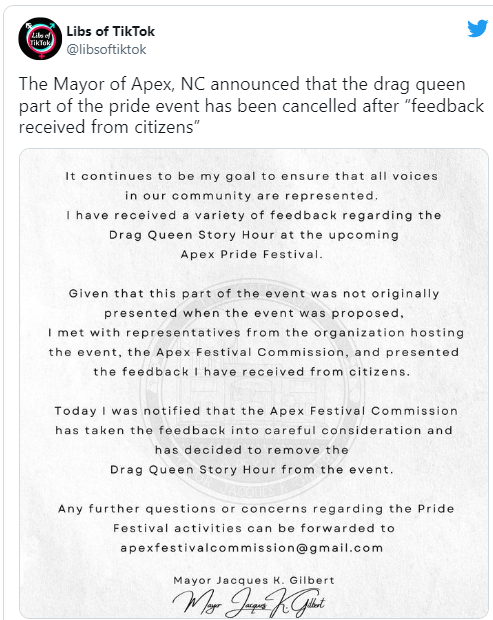 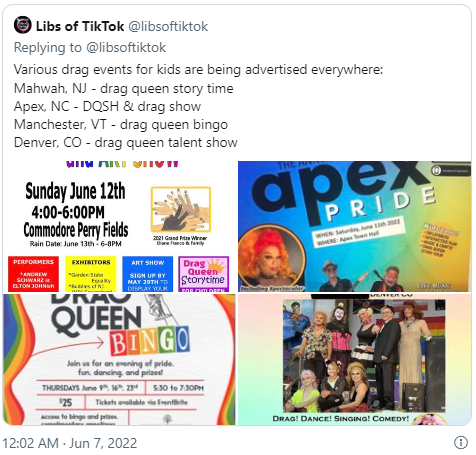 Drag Queen Story Hour is an organization for drag queens to read to children in libraries, schools and bookstores. The organization captures the “imagination and play of the gender fluidity of childhood and gives kids glamorous, positive and unabashedly queer role models,” according to the website.

The local chapter of Drag Queen Story Hour did not immediately respond to The Daily Caller News Foundation’s request for comment.

Hundreds of comments were made on the Facebook post, with one parent commenting that “[t]his was THE Pride event I was planning to attend with my toddler. Very disappointed in the event organizers who were swayed by hateful, misguided comments,” WRAL.com reported.

“Because of those threats, the commission decided to pull the Drag Queen Story Hour from the kids’ zone,” Killingsworth told the outlet. “I’m disappointed and frustrated, but I do want to have an amazing Pride event that is still going to feature drag performances on stage.”

The Apex Festival Commission did not immediately respond to The Daily Caller News Foundation’s request for comment.