The Mixed Signals Are Getting More Twisted 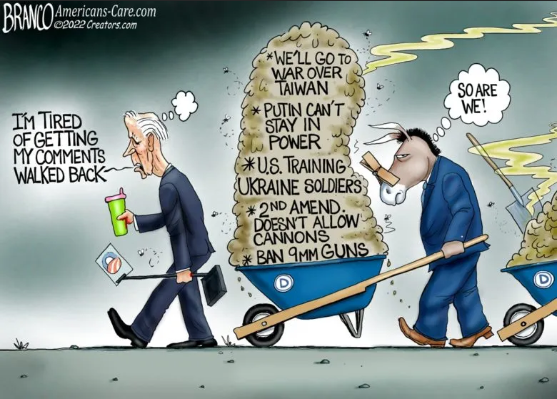 The Mixed Signals Are Getting More Twisted

Rising gas prices are good, as is low weekly job creation. The President thinks that both indicators are favorable signs that his economic policies are working to recover the economy. He is either delirious, ignorant of Economics 101, or was a classmate of AOC. By his sinking approval numbers, not many are buying what Biden is dishing out. The only state in the country where Biden’s approval rating is above water is Hawaii. Not even California, New York, or his home state of Delaware are in his corner.

The President still claims that he is a unifier while at the same time calling Republicans unconscionably or the MAGA Crowd. Those are not terms of endearment or labels that will draw us together. Joe Biden is making Donald Trump look like a rank amateur at dividing this country. If you dig deeper into his approval numbers, with 75% of Americans thinking the country is headed in the wrong direction, maybe he is unifying us against him.

Biden claims that he is doing all he can to bring relief to American families every day. He does this as we wake daily to a new record high gas prices, historic inflation numbers, and empty shelves that used to store infant formula. He has put a massive dent in our fossil fuel industry but will go to the Middle East next week to beg the Saudis to increase their drilling and production and is also talking to Venezuela to do the same. We were exporting oil and gas just fifteen months ago, and now we are begging adversaries to sell their oil to us. Nobody believes his message because they do believe the checking accounts and 401K.

Biden’s focus this week has been gun control and how he can ban “assault” weapons, though he cannot define them. He also seems to be going after anything with a magazine. Biden wants to tear apart the Second Amendment, and his minions like Rep Jones (D-NY) are seizing on the opportunity. In one sentence, he declared that the Filibuster is fair game and packing the court is an option. This tirade by Democrats is not about gun reform but about using a horrific incident as a reason to transform America. Biden is cheering them on.

With three out of four Americans saying they are not pleased with the country’s direction and Biden is at the wheel. So if he claims to be the President of all Americans, when will he correct course. The Biden message and Presidency are failing so badly that even the mainstream media can no longer carry his baggage. They have to preserve what little credibility they have by telling the truth. This spells even a more dire situation for Democrats in November.

So is it bad messaging, policies, and facts inconsistent between the President and his clean-up staff, or is it his new Press Secretary who reads every answer and has the nervous Kamala giggle? It is a train wreck, so the President left for Delaware today for a long weekend. That is one thing that Biden is doing better than any of his predecessors. He is number one in projected days off. Maybe that is the best place for him as people like Mayor Pete and Kamala Harris are MIA. Joe says people are urging him to do something. He has no clue what to do.

I love this country and what it has contributed to the world. We are a young and still forming country but I have very conservative views that make me fearful for the direction many want to see us heading. I believe we are strong enough to keep us on track but making folks aware of the truth is essential to a successful and prosperous future for us all.