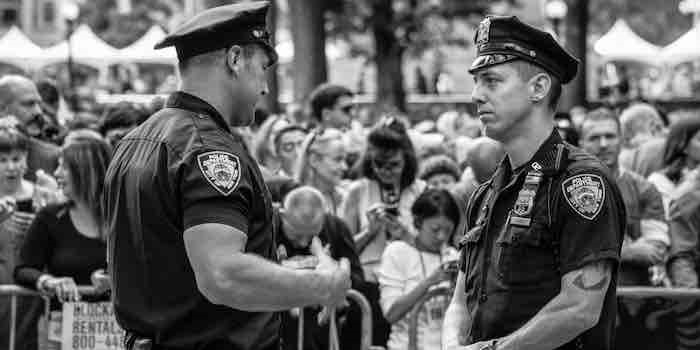 With crime rising and the number of police officers declining, it is becoming more unsafe for average Americans, especially those who live in urban areas overrun with violence

In our politically correct society today, it is not easy being a police officer. In the aftermath of the death of George Floyd, leftist politicians started a nationwide movement to defund police departments. This led to a massive decline in police departments as officers either resigned or retired.

Sadly, the result was very predictable as violent crime rates soared across the country. Not only are average citizens being victimized more than ever, but police officers are being targeted in greater numbers. According to Michael Letts of In-Vest USA, police officers are facing “On average…more than 60,000 assaults against law enforcement officers each year, resulting in 17,500 injuries and an average of one death every 55 hours or 158 per year.”

It is even more sobering to realize that our police officers do not have adequate protection. Letts maintains that “close to 400,000 of the 900,000 officers in the US have no protective vest which means they run 14 times higher risk of dying from gunfire than an officer who does wear one.”

Increasingly, police officers are outgunned and undermanned. They face constant threats on the streets of violent cities but are often blamed for the high crime rate. With too few police officers, it is impossible to quickly respond to emergency calls or adequately investigate ongoing cases.

In addition, police officers must deal with the prospect of civil rights lawsuits, media scrutiny, monitors who supervise and criticize their work and a Department of Justice that oversees departments under a “consent decree.” In many cases, this federal oversight prevents officers from the type of initiative-taking, aggressive police work that prevents and solves crimes.

Officers must assume that every member of the public has a cell phone and is videoing every action they make. In many departments, officers wear a “body cam” to eliminate questions about their response. In today’s police environment, there are “body cams,” but not sufficient body armor for officers.

All these factors result in more dangerous communities and less effective police work. In Uvalde, Texas, the inaction of the school police chief is now under federal investigation. On Tuesday, an 18-year-old shooter was in the Robb Elementary School for ninety minutes killing nineteen students and two teachers before elite officers from the U.S. Border Patrol finally were able to kill him. The shooter had barricaded himself in a classroom and officers waited to enter until a janitor opened the locked door.

After criticism from parents of the victims and community members, the Mayor of Uvalde requested the Department of Justice conduct a “Critical Incident Review” of the law enforcement response to the mass murder event. The goal of the review will be “to provide an independent account of law enforcement actions and responses that day, and to identify lessons learned and best practices to help first responders prepare for and respond to active shooter events.”

While the police are under scrutiny, so are school officials. Why was the door open for the shooter to enter? Where were the security guards?

To prevent such tragedies, all schools should be “hardened” with security, metal detectors, limited number of exits and entrances. The doors must be locked and there should be security cameras and all the other features that provide safety to air travelers and bureaucrats who work in federal buildings. Our school children, our future, and our teachers and administrators, deserve a much safer learning environment.

Some of the major lessons that should be learned from this tragedy are that police officers need to respond quickly to save lives. There should not be delays setting up a perimeter or indecision to gauge how the shooter will respond. One of the troubling aspects of this case is that police provided inaccurate and contradictory accounts of what happened on that day.

This incident highlights how our police officers have been regulated into inaction. Too many police officers today are just bureaucrats who manage paperwork or show up at a murder scene to place yellow cones on the street. take a bunch of pictures, but what do they accomplish? The forms, the yellow cones, the “Caution Tape” are procedures that do not catch criminals or make our cities any safer.

Their work does not lead to enough murders being solved. Of course, if there is no arrest, there are no criminals going to prison.

To be fair, the lack of arrests is not simply due to hamstringing the activities of an inadequate number of police officers. No one can be arrested if witnesses are too scared to testify.

Without witnesses, arrests, or convictions, exactly what is our criminal justice system?

Without witnesses, arrests, or convictions, exactly what is our criminal justice system? It is a jobs program that provides paychecks to public servants, who due to the constraints of the system, are not able to accomplish much of anything, certainly not enough.

It is like having a fire department with thousands of employees, but the trucks are only equipped with a small garden hose. Such a system might work if there were not many fires, and they were tiny.  However, with frequent big fires, it is an utter failure. This is exactly what has happened with our criminal justice system.

It is not designed to work when there is a plethora of violent crime. Also, there is not enough jail space to take enough violent criminals off the streets.

The whole criminal justice system is a mess that is wasting untold public money. It is a jobs program that must be radically changed to accomplish something. At a minimum, we must allow our police officers to do their jobs and be crime fighters once again.

With crime rising and the number of police officers declining, it is becoming more unsafe for average Americans, especially those who live in urban areas overrun with violence. It has never been tougher to be a police officer in our country today. At a minimum, we need to give them the equipment and support they need to perform their duties to “protect and serve.”