Several heroes emerged from the tragedy of the Uvalde, Texas, school shooting Tuesday in which a gunman shot and killed 19 children and two teachers.

Multiple individuals entered the site of the active shooting to evacuate children and take out the gunman, while community members and people across the country came together to support victims through blood donations, financial support and other services for the families of victims.

1.) Mother Rescues Children From School After Marshals Arrest Her

Angeli Rose Gomez, whose two children were in the school, was handcuffed by federal marshals after begging them to take action during the shooting, she told The Wall Street Journal, but she had a police officer she knew convince them to uncuff her. She then snuck off, jumped a school fence, ran inside the school and helped her children escape.

Jacob Albarado, an off-duty border patrol agent, was getting a haircut when his wife, a teacher at Robb Elementary School, told him about the shooter in a text message, according to The New York Times. He borrowed a shotgun from his barber, who went with him to the school.

“There’s an active shooter,” she wrote, according to the NYT. “Help … I love you.”

He began evacuating children, including his daughter, one class at a time, the NYT reported. Two officers accompanied him, guns drawn, providing cover.

One 11-year-old who was in the classroom with the shooter survived by covering herself in her classmate’s blood during the attack and pretending to be dead, according to KPRC. The girl was not shot but was hospitalized with injuries from bullet fragments in her back.

4.) Nation Raises Money For Family That Lost Both Parents

Others aided the victims of the shooting from across the country with financial support. A GoFundMe has raised nearly $2.5 million for the family of Irma Garcia, one of the two teachers killed in the Monday attack, and her husband, Joe, who died of a heart attack Thursday.

The couple had four children, two of whom are under 18, according to The Detroit Free Press.

Members of the community quickly lined up to donate blood following the attack as reports trickled in about the number of wounded and hospitalized victims. Donors filled all appointments throughout the entire week by Tuesday evening, and there was a two hour wait at the South Texas Blood & Tissue offices that night, the organization announced. 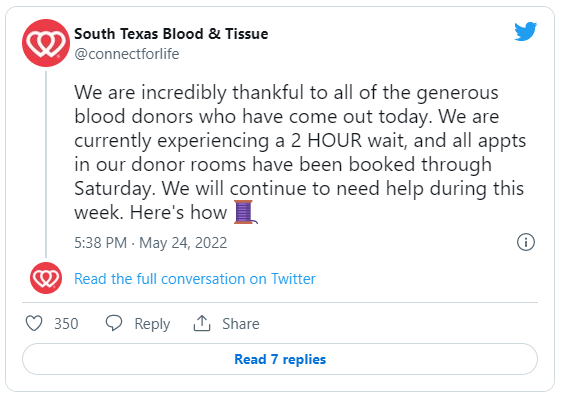 The Uvalde Justice of the Peace Eulalio Diaz worked late into the night Tuesday identifying the bodies of victims so that their families could have answers, according to the El Paso Times. In some cases he swabbed family members for DNA to spare them from having to identify their deceased loved ones. 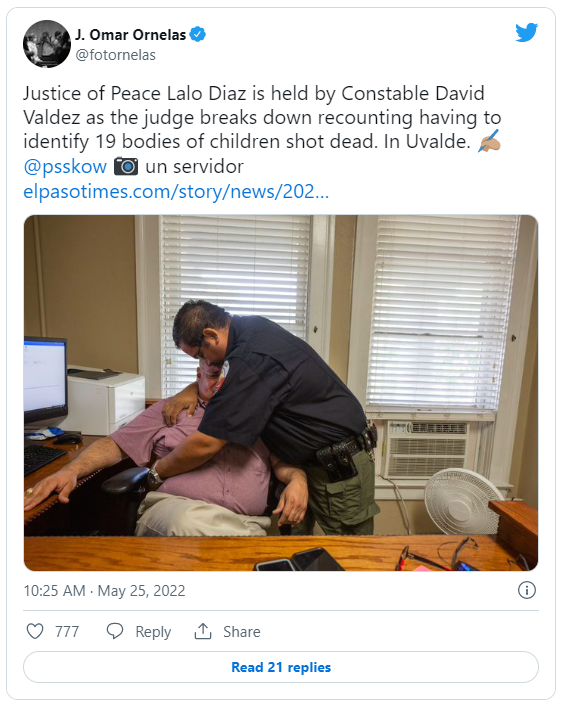 A picture circulated online of Constable David Valdez hugging Diaz after the gruesome task of identifying the children’s bodies.

One anonymous donor is covering all of the funeral expenses for children who were killed in the massacre, Republican Texas Gov. Greg Abbott announced Friday.

When Democratic gubernatorial candidate Beto O’Rourke derailed a Wednesday press conference about the mass shooting with comments blaming Republicans for failing to “do something” about gun violence, the Uvalde mayor quickly shut him down.

“Sir, you’re out of line. Please leave this auditorium,” Uvalde Mayor Don McLaughlin told O’Rourke. “I can’t believe you’re a sick son of a bitch that comes to a deal like this to make a political issue.”