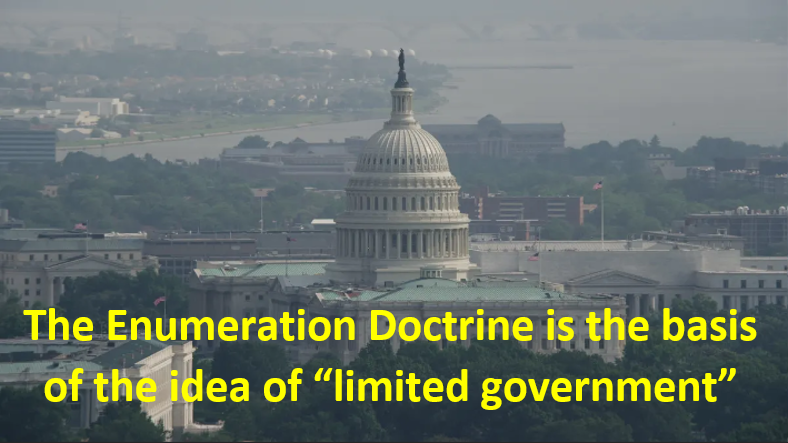 The Fifth Circuit Court of Appeals told the Securities and Exchange Commission that they could no longer legislate from within, nor hold court within the agency. Those charged have a right to a jury trial, said the court.

The move was based on the Enumeration Doctrine. Nowhere in the Constitution of the United States does it expressly authorize any agency to handle legislative activities or judicial activities within the agency. According to Article I, Section 1 of the Constitution, all legislative powers (the powers to make law, modify law, and repeal law) belongs to the legislative body of government, which, at the federal level, is the United States Congress. One might argue that the legislatures gave the agency the authority to make rules and to hear any challenges or make rulings regarding rule-breaking. However, in Article I, Section 1 the word used regarding the legal transfer of legislative powers from the States to Congress is “vested,” which means the authority cannot be given away by the legislative branch. As per the Separation of Powers doctrine, only the legislature can legislate, and they cannot legally hand those powers off to another branch of government.

The Enumeration Doctrine was also front and center regarding the recent “leak” regarding an abortion case involving the last abortion clinic in Mississippi, located in the City of Jackson. The leak included Justice Samuel Alito’s judicial opinion that seemed to suggest that the case would ultimately reverse 1973s Roe v. Wade, the case that is considered as being the one that “legalized abortion” throughout the United States. The Democrats called the leak a dark day in the history of the United States.

The language in Alito’s opinion basically says that Roe v. Wade was a mistake in the first place, not because of the moral implications or the religious arguments regarding the “landmark ruling”, but because the Enumeration Doctrine didn’t give the federal court system the authority to make the ruling in the first place.

“We hold that Roe and Casey must be overruled,” Justice Samuel Alito wrote in the document labeled the “Opinion of the Court” for the case Dobbs v. Jackson Women’s Health Organization. “It is time to heed the Constitution and return the issue of abortion to the people’s elected representatives.”

Could this mean that the courts, with these two recent decisions, as the Supreme Court and the lower courts are currently judicially populated, are on their way back to a more constitutional foundation?

The Enumeration Doctrine is the basis of the idea of “limited government”. Unlike national governments elsewhere in the world, the United States’ Federal Government only has powers that are expressly enumerated in the Constitution. Otherwise, a power may be authorized to the States, instead. The concept of “localism” was central to the belief in having the Enumeration Doctrine, which means that local issues may only be legislated by local government. The Federal Government was designed to handle only external issues, such as war and trade with other countries, or issues directly affecting the union such as dispute between the States, or communication between the States (i.e. Post Office); as indicated by James Madison in Federalist Paper #45 and as established by the Tenth Amendment. Since “abortion” nor any health care or medical procedures are not expressly enumerated in the Constitution, whether it be the original seven articles, or any of the amendments, the federal government does not have the authority to legislate regarding abortion, much less allow the federal courts to rule on the issue. “Reproductive” issues belong to the States, and they, individually, may make laws regarding the issue as they see fit. While, as a strict constitutional constructionist, I would remind the States that unborn babies are “persons”, and the Fourteenth Amendment specifically disallows any State to deprive any person of “life, liberty or property without due process,” in the end just the fact that the Dobbs Case may prove to send the issue of abortion back to the States is a major win for the Enumeration Doctrine, the United States Constitution, and American Liberty in this modern age.