One County in Idaho is Considered the Last Stand for Conservatives, Urging Others to Follow Their Lead 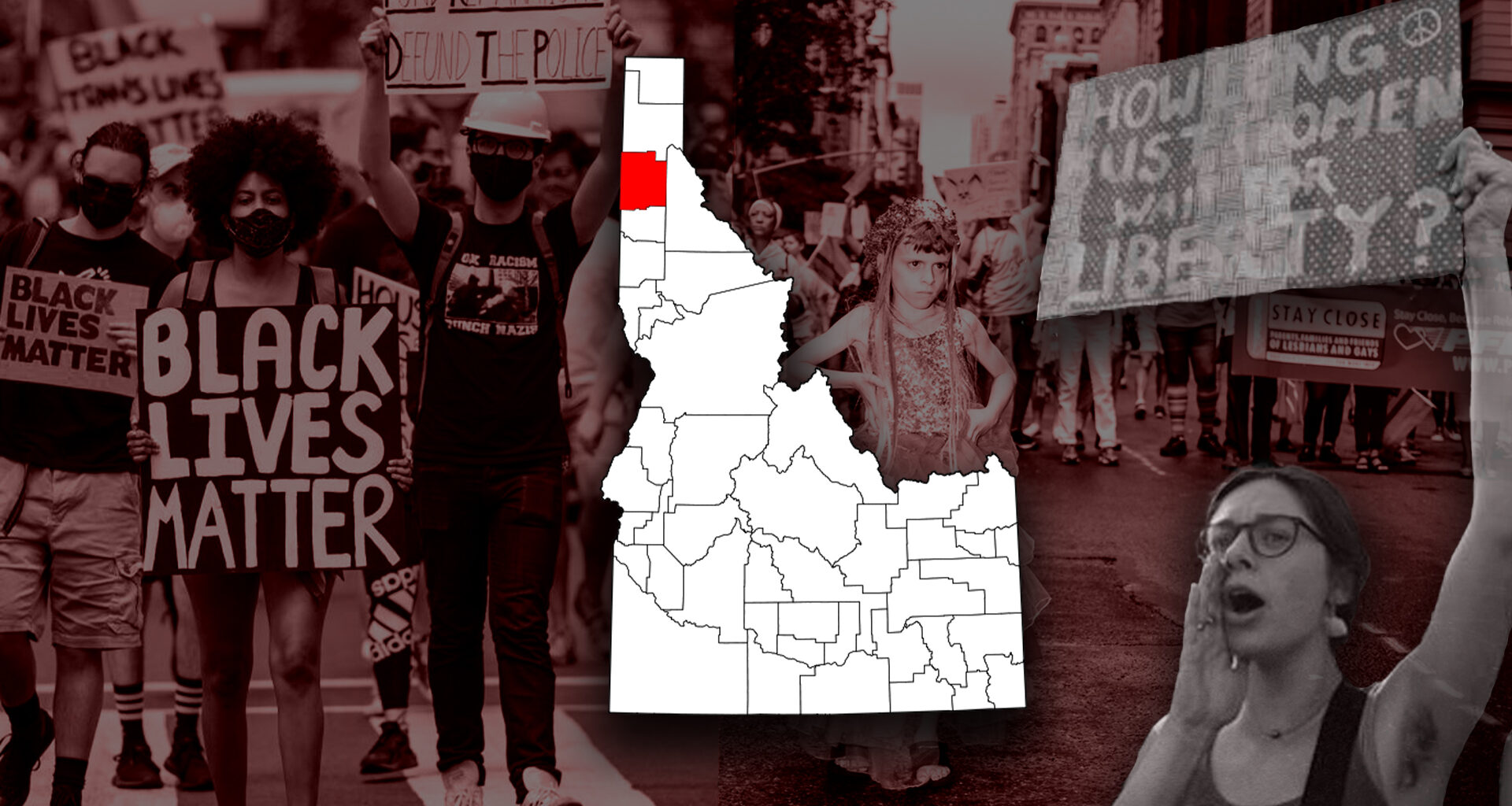 One County in Idaho is Considered the Last Stand for Conservatives, Urging Others to Follow Their Lead

Demographic change is mostly to blame for the dramatic political shift California began to experience in the late 1980s, but the complacency of Republicans was a major cause as well.

No one expected California to turn into a state where more people are leaving than moving in. After all, it was the Golden state. If you were to tell California Republicans in the 1980s —especially during Reagan’s ‘morning in America’ era — that the state would eventually turn permanently blue, they would have thought you were crazy.

Republicans won the former Golden state in nearly every presidential election between 1952 and 1988. The state elected Nixon and voted overwhelmingly for Reagan twice in the 80s. California is also home to the Reagan national library and was a former home base for big-name Republicans for decades.

No one expected this to happen. Until it did.

It was right around 1990 when Republicans started to notice they were losing the state due to fast and furious demographic changes, as well as the apathy of conservative voters and political activists. In the early 2000s, the GOP began to realize that they had lost the state for good.

Because California Republicans never fathomed the state could turn into what it is today, many began to lose interest, and eventually, the GOP’s state political apparatus was exhausted there. Washington and Oregon also both fell to Democrats shortly thereafter, for many of the same reasons.

Even though former President Trump has revitalized political interest in conservatives across the US, the same sort of indifference exists, and is a major issue in the deepest red states. People in these areas are almost oblivious to what their state can turn into, and how quickly it can happen.

Several counties in Texas for example have turned permanently blue and are never going to turn back red again. Dallas County is a great example, going for Barack Obama in 2008 and never turning back after that.

Texas’ change, like California, is driven mainly by a swift demographic change, but again, the complacency of conservatives there played a major role. The change that occurred in Washington and Oregon, however, can be attributed almost solely to passivity.

As the political apparatus of the Democrat party moves west, Idaho is their next big Target. 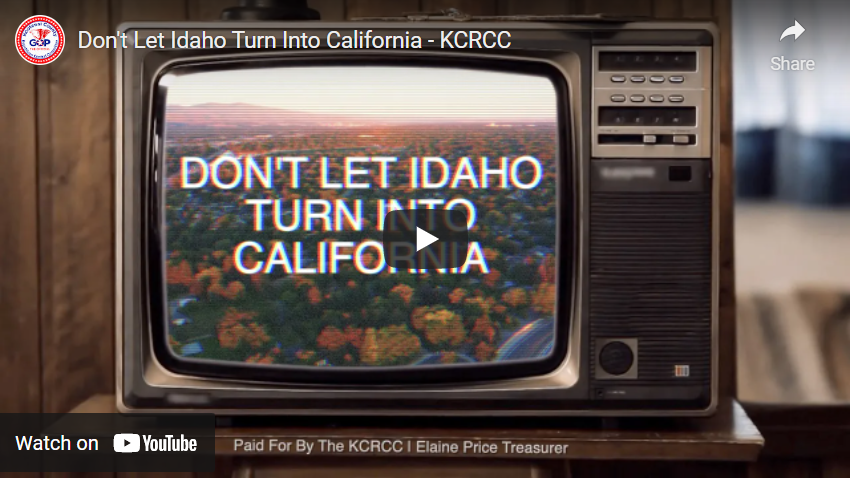 With the streets lined with LGBT symbols and giant ‘Black Lives Matter’ banners, the now-Democrat mayor of Boise Idaho, Lauren McLean, marched down the street in support of her liberal beliefs.

In a show of force and almost a celebration of the conquering of conservative politics in the state’s most populous city, McLean frequently gathers with the city’s liberal residents to footslog down Mainstreet to support the latest liberal cause.

Now that Boise, and more broadly, Ada County’s change is well underway, mayor McClean feels comfortable boldly posting her endorsements of liberal politicians like Pete Buttigieg. Since her election, the new mayor has also consistently expressed the importance of masks on Twitter and talks about how vital it is to bring ‘diversity’ to the state of Idaho.

What is going to be the next state motto? 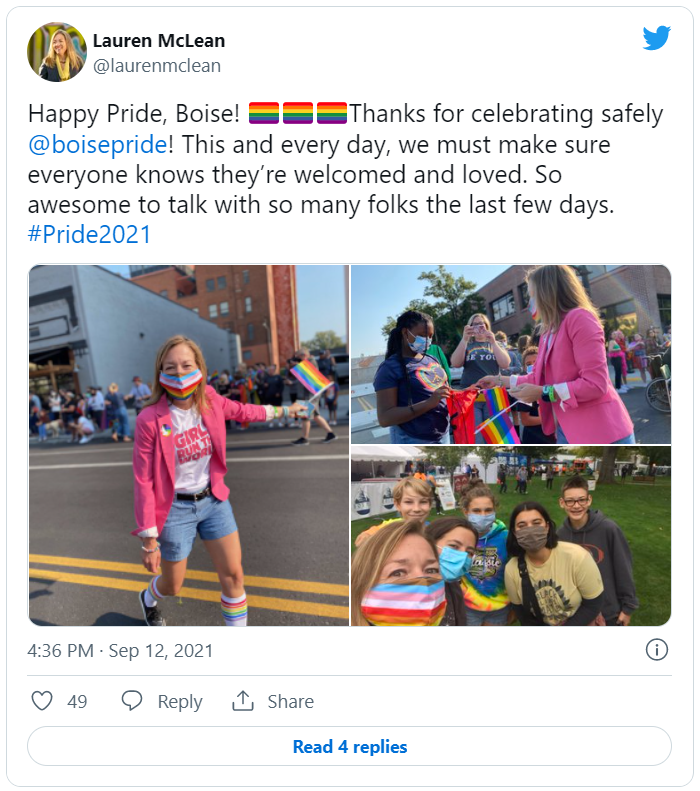 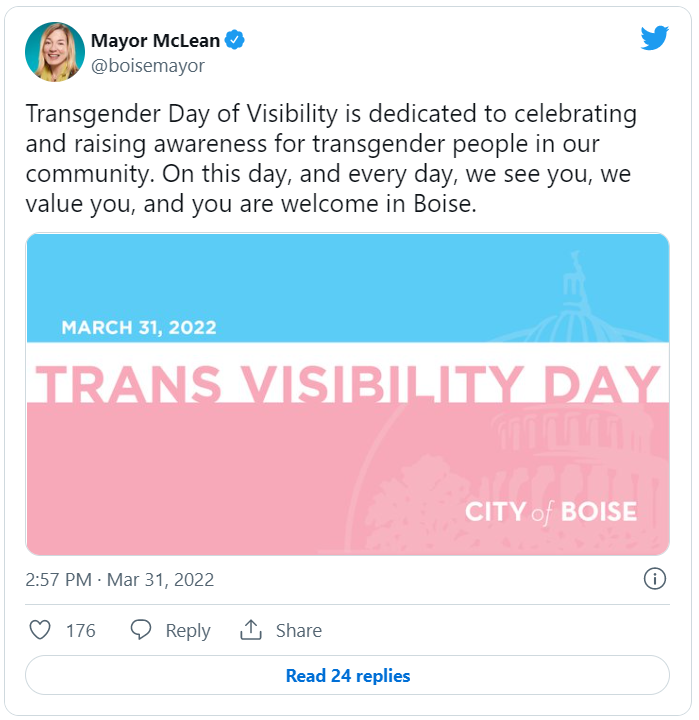 President Joe Biden drew more than one hundred donors at an Idaho event in August of 2020. Sen. Elizabeth Warren also scheduled a visit around the same time before ending her campaign officially. Ten years ago Idaho would have never been a state that interested Democrats, but the party is now growing increasingly optimistic about the future politics of the gem state.

“We hope that Idaho continues to grow in diversity and political affiliation, and that will strengthen our party and candidates,” Lindsey Johnson, spokeswoman for the Idaho Democratic Party told the Associated Press at the time.

Ada County, where Boise is located, has been trending blue for quite some time. Around 20 years ago, Ada County voted over 60% for Republicans and only 32% for Democrats. Today it’s closer than ever before, with nearly 50% of Ada’s electorate voting for Joe Biden in the last election.

Kettler might be right, as the banners of the conquerors replace the conquered, Boise almost looks indistinguishable from Portland or Seattle. 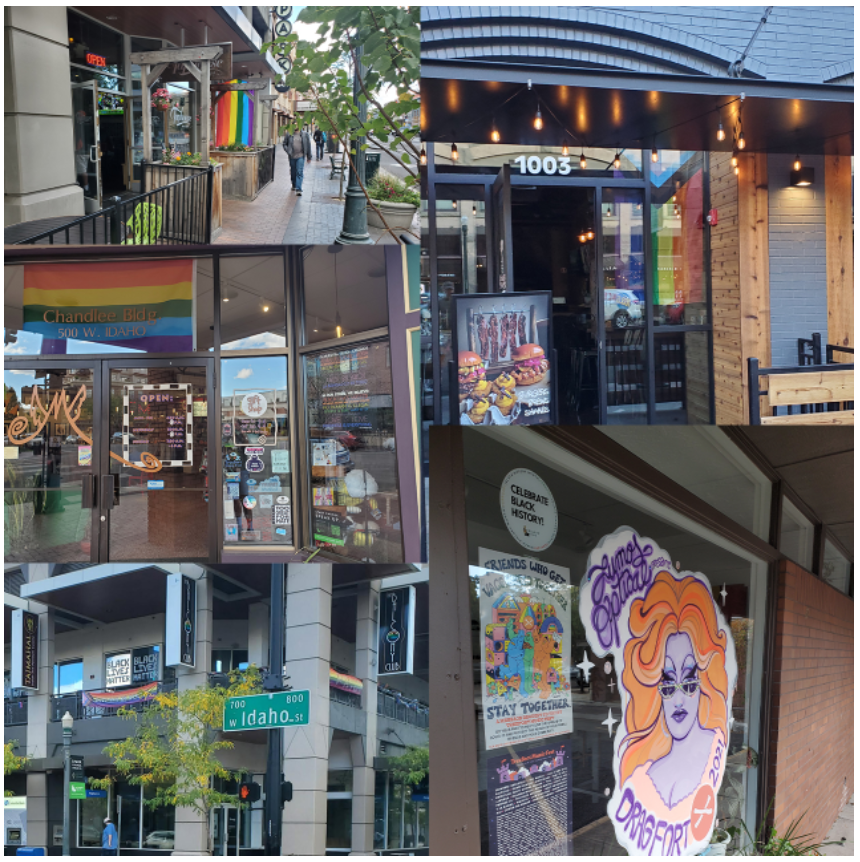 But just under four hundred miles north of Boise, there is one county that seems to be extremely successful at keeping left-wing politics at bay.

Idaho Gov. Brad Little. who many in the state blame for the past two years of covid restrictions, won the Republican Party’s nomination for a second term in the recent primary elections. His win was mostly driven by voters from Ada County, but most of North Idaho, especially Kootenai County, overwhelmingly rejected Little as well as others the county’s residents feel are inadequate.

In the governor’s primary race, Brad Little defeated the more conservative Janice McGeachin by around twenty percentage points, but in Kootenai County, those results were reversed.

“This graphic makes the north look like the back end of the Titanic— sticking out of the water longest, but dragged down eventually,” said one North Idaho resident about the final election map. “Proud of that little yellow patch but we have a lot of work to do,” 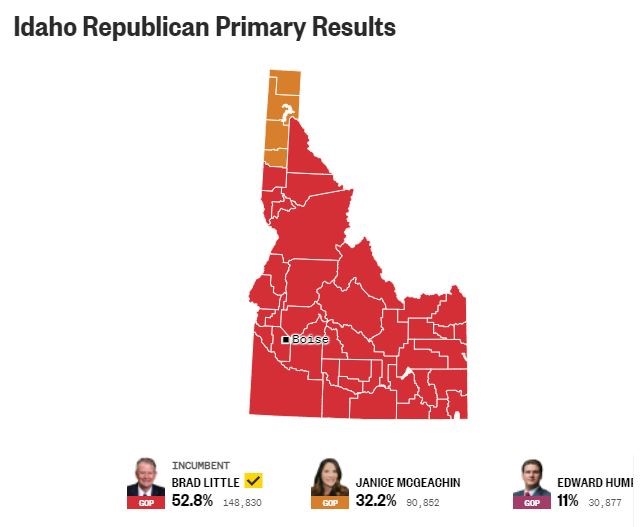 While Little won a second term, Attorney General Lawrence Wasden — a long-time incumbent considered a ‘RINO’ by North Idaho Republicans — did not. Thanks in large part to Kootenai.

As Ada County voted for Wasden by 3 percentage points, Kootenai County alone handed the new attorney general, Raul Labrador, over 20,000 votes. Labrador — who was a founding member of the House Freedom Caucus and challenged Rep. Kevin McCarthy for the position of House majority whip — was among a long list of Republicans who criticized the 2020 election as fraudulent.

Because of the political method installed by the Kootenai County GOP, and a few key groups of activists and volunteers, the county voted overwhelmingly for 100% of the candidates they endorsed. The dedicated group has their method down to a science, and it helped most of their local candidates coast to victory, while also pushing several statewide candidates over the finish line.

The county GOP distributed its sample ballot in digital forms on social media and in physical forms in local newspapers and mailers. While the group also deployed its activists across the northern counties to put up signs, door-knock, and make phone calls for those they endorsed, others coordinated and attended campaign events and fundraisers.

Because of the dissatisfaction with some of the Republicans in office, Idaho voters broadly were looking to primary those they did not consider conservative enough.

The total number of primaries increased in 2022 to its highest level compared to previous cycles, driven entirely by an increase in Republican contests. Overall, 259 major party candidates—212 Republicans and 47 Democrats—filed to run for the state legislature. This equals 2.5 candidates per seat, the largest figure since at least 2014.

Kootenai Rooting Out Democrats in Disguise

Because Democrats can’t win elections in northern Idaho, Kootenai County has put in place a rating and vetting system that, in part, aims to determine if the person running is actually conservative.

If the group has determined they are a ‘Democrat in disguise,’ they decline to endorse the candidate and the chances of them winning office in the area are slim. The Idaho Freedom Foundation also plays a big role in helping Kootenai County determine who’s real and who’s a fraud.

In Kootenai county Idaho, the Republican central committee does this flawlessly, and their chairman, Brent Reagan, explains it simply, many in the region say it’s imperative that other counties follow their lead.

“Candidates are initially invited to fill out a questionnaire. The questionnaire and the candidates’ answers are available on our website. They are then interviewed by our Election Committee. We conduct candidate forums for committee members and visitors to meet and question the candidates.” 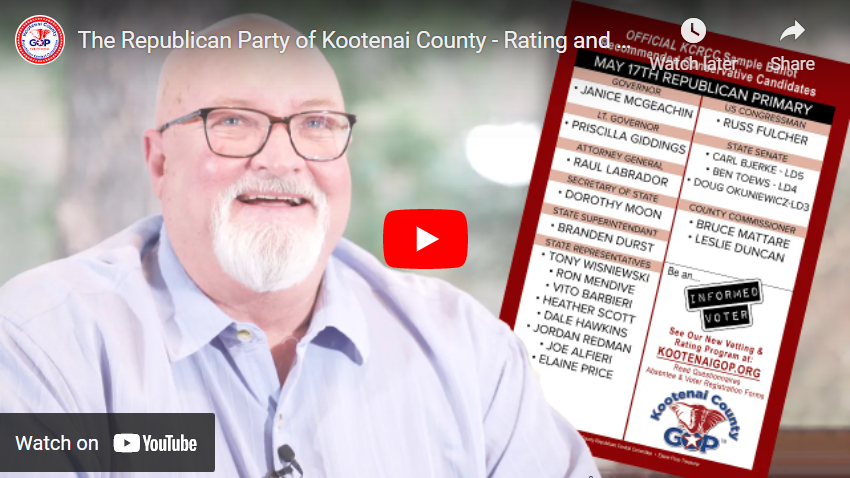 Take Over Your County, Take Back Your State

Conservatives all across the US have expressed frustration as they watch their state, county by county, turn blue. Many grow apathetic believing there is nothing they can do and forfeit the fight altogether.

Bishop Desmond Tutu once wisely said that “there is only one way to eat an elephant: a bite at a time.” What Tutu meant by this is that some things in life that seem overwhelming and impossible, can be accomplished gradually by taking on just a little bit at a time.

Voter turnout is key, but voter action is just as important.

Take a trip to your local county Republican committee meeting that is open to the public and ask how you can get involved, run in your precinct, and get active. Some of the smallest positions only take a couple of meetings a month and can act as a springboard into other positions. Many precincts are vacant as new ones are created, and your local county GOP would be happy to appoint someone they trust.

Take the precincts first, then the county, then the state. It is with one bite at a time you will take your country back.