Now you’ve done it, Birchers! Your hard work has gotten the attention of the upper tier propagandists at the New York Times. 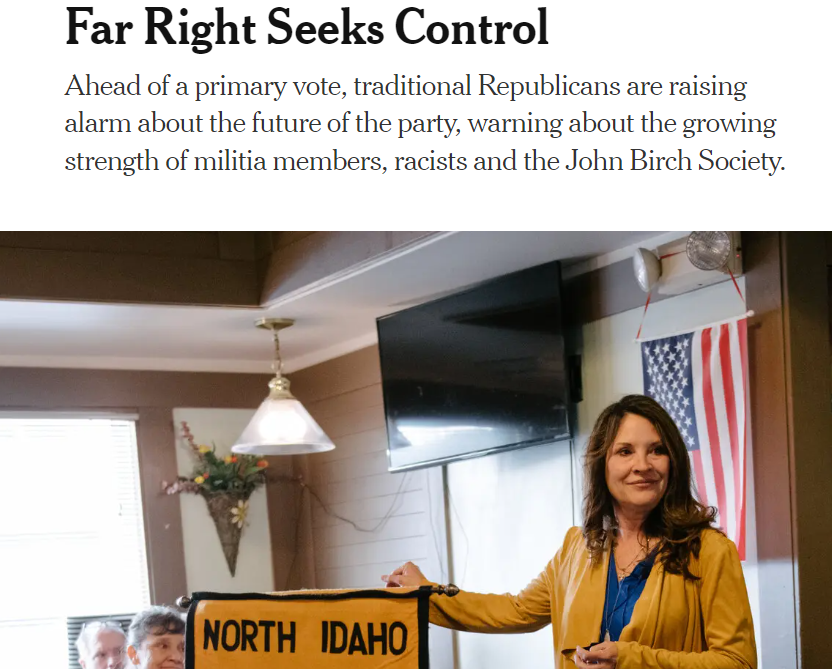 Now you’ve done it, Birchers! Your hard work has gotten the attention of the upper tier propagandists at the New York Times.

On May 15, the Times published an article titled “A Fracture in Idaho’s G.O.P. as the Far Right Seeks Control.” The JBS is “one of the growing powers in the region” responsible for an increasing number of “zealots motivated by a desire to limit the influence of government,” the Times reported. This, apparently, is a bad thing, according to the Deep State-controlled mouthpiece.

The Times also published blatant propaganda removed from truth. We wrote them the next day and asked to publish our letter to the editor, part of an attempt to untangle some of the fake news in its piece. But we never heard back. You can read more about that in JBS Communications Director Paul Dragu’s piece in The New American here.

Despite the spin and lies, the Times got something right: Birchers are birch’n, and as a result, Constitutional ideas are taking hold and changing the political landscape across the country.

The Deep State-controlled Times is terrified that people will begin electing Constitutionally-minded leaders en masse. And they’re right to worry. Because that’s exactly what our hardworking members are accomplishing: creating an educated electorate that obeys and enforces the Constitution.

The media hysterics is a testament to your hard work, Birchers and supporters! Be encouraged. You are changing things! Commenting on the matter, JBS CEO Bill Hahn said that what’s happening is a “testament to active members who are holding their elected officials accountable. They have had enough of broken campaign promises and are doing their part in building an educated electorate, as advised by the Founding Fathers.”