Destroying the Altar of ‘Woke’ 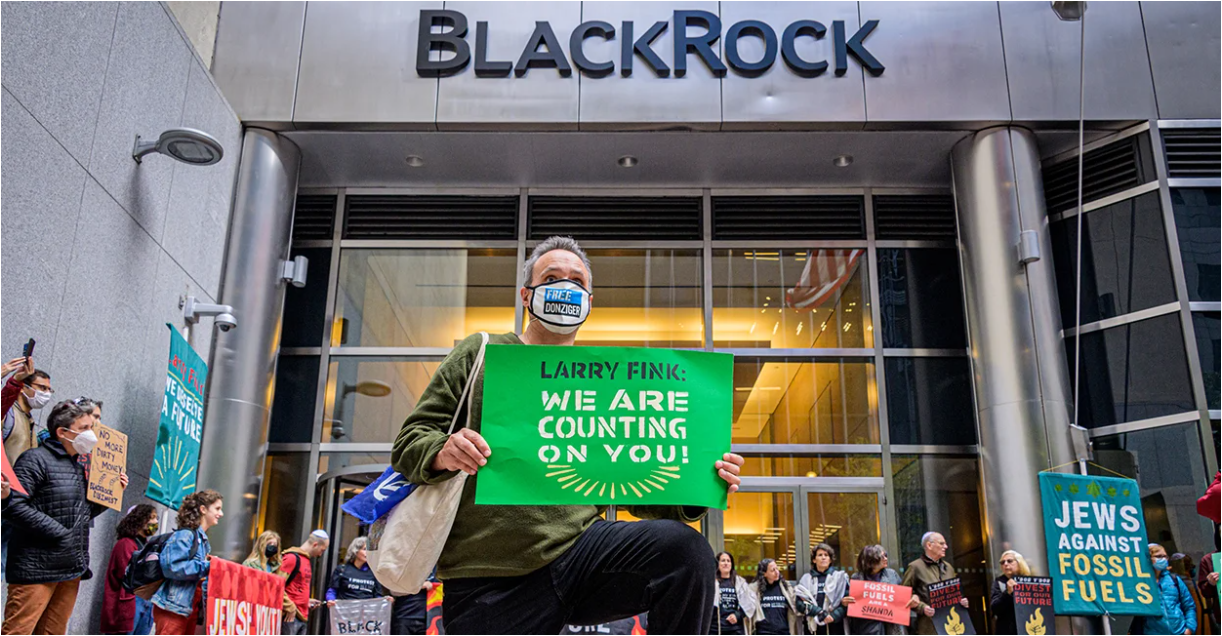 Mega fund managers like BlackRock are using the incredible influence they have with companies they hold large investments in to push the left-wing agenda. But average investors can push back. Pictured: Leftist protesters outside of BlackRock’s Manhattan headquarters urge it to stop funding the fossil fuel industry, Oct. 18, 2021. (Photo: Erik McGregor, LightRocket/Getty Images)

Destroying the Altar of ‘Woke’

Everywhere we look, forces are shoving us to the left, and it often feels like we don’t have a vote. But now, we are seeing pushback from people sick and tired of their hard-earned money being sacrificed on the altar of “woke.”

A crystalizing moment for many was Major League Baseball moving its All-Star Game from Georgia to Colorado in 2021 in protest of Georgia’s newly enacted election integrity law. Others suffer Big Tech’s censorship of conservatives, happening all the time.

Most recently, we’ve seen Disney bow to the pressure of left-wing activism, and because of it and the ensuing response, its stock sunk by as much as 31% since the start of 2022.

On a recent episode of the “Heritage Explains” podcast, I spoke with Andy Puzder, former CKE Restaurants CEO and current Heritage Foundation visiting fellow, about this phenomenon commonly referred to as environmental, social, and governance, or ESG, investing. He spoke about the process and the incredible power asset managers like BlackRock, State Street, and Vanguard are wielding to push the country leftward.

“The people that run the largest financial asset funds in the country … if you combine their ownership, they’re the No. 1 shareholder in 80% of the companies in the S&P 500,” he explained. “So, they use this criteria to force CEOs to focus on these progressive agenda items, as opposed to focusing on profit.”

And the pushback against ESG is gaining momentum. All around the country, conservative governors, state legislators, state treasurers, and other officials are ensuring that things like pension funds and public dollars are not being sacrificed for “woke” causes but maximized for the shareholders—we the people.

According to Axios, last year, a group of 15 state treasurers threatened to remove their states’ assets from financial institutions that “refuse to lend to or invest in” the fossil fuel industry and gave a full-throated rejection of the “command and control” policies many financial institutions have aimed at bending the free market.

Vivek Ramaswamy is a successful entrepreneur and best-selling author. After tracking this issue and speaking out against it, he decided to start his own investment firm called Strive Asset Management.

In a recent interview with Fox News, Ramaswamy spoke about the firm’s initial investment of $20 million and how Strive will differ in its approach to investing: “What we’re doing is representing actually the voices of the actual shareholders, not the institutions who claim to be the shareholders, but their clients, the everyday citizens of this country.”

This is a positive step in the right direction, but $20 million is a drop in the bucket compared to the more than $20 trillion managed by the big asset manager funds.

More needs to be done to ensure that we keep the focus on the many, and not the few. Puzder said one of the most powerful things individuals can do to keep the woke in check is to not sell their stock in woke companies like Disney but buy more and then speak up at shareholder meetings.

While the full impact of ESG asset management is not fully known, we do know that without pushback and accountability, wealthy asset managers will continue to use our investments to shape American culture to fit their radical agenda—at the cost of not just our 401(k)s but of America’s future.

To listen to my full conversation with Puzder, check out the latest episode of “Heritage Explains” here.

Timothy Doescher is associate director of coalition relations at The Heritage Foundation’s Institute for Economic Freedom.