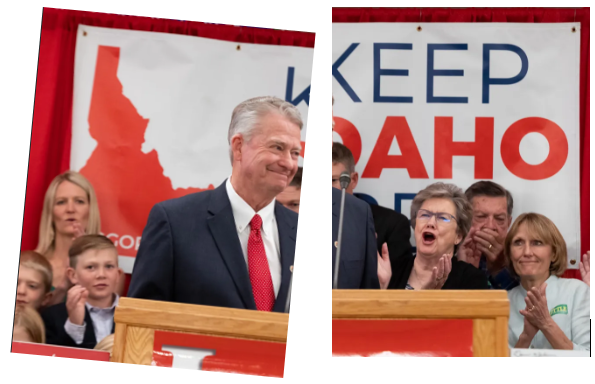 For patriots and conservatives the results of the May primary were discouraging and a blow for freedom on a statewide scale.  After the two years of lockdowns and restrictions on our state and the tyranny imposed by our Governor, Attorney General and leaders in our legislature we0 thought the eyes of the electorate would be opened and yet here we are  facing four more years of Little’s statist philosophy.

What happened?  First, nearly all of the media in Idaho was aligned against us.  When you look at the endorsements from the Boise Statesman or the Coeur d’Alene Press they represented all of the RINOs that were running.   They started off with a guilt trip that anyone trying to change the course were not the “moderates” that were in place to solve our problems with more money spent and controls applied. Mike Patrick of The Press went beyond endorsements with vitriol and attacks that became personal with little regard to the issues.  Endorsing Bedke for Lt. Governor, Patrick summarized Priscilla Giddings with one sentence: “She is not qualified.” A valedictorian of her class in high school then graduating from the Air Force Academy and flying thousands of hours over Afghanistan.  Not qualified?

We saw the same media control the narrative and reporting on the “pandemic”.  They used surrogates like Jim Jones who accused anyone of taking the Nobel Prize winning drug Ivermectin of taking the idiotic step of ingesting “horse paste”.  The Lakeland School District in the fall of 2020 decided to have school as normal, they followed the “science.”  Masks are voluntary, school is five days a week and if you are sick – stay home.   Was there any reporting on this approach compared to Post Falls or Coeur d’Alene districts in the paper by a curious reporter?  Of course not, that would go against everything Fauci and Little stood for.

What this primary proved is that the Republicans in Bonner, Boundary and Kootenai counties vetted and organized to elect people that have a worldview that supports freedom and a constitutional philosophy.  For example McGeachin defeated Little by over 5,000 votes and Giddings was in first place by 9,000 votes in Kootenai County.  The statewide results were disappointing concerning these races, however when we look at the legislature it was an earthquake. 42 out of 105 lawmakers will be new to the office and the State Senate will shift sharply to a more conservative stance that supports bills coming out of the State House.

Daniel Horowitz of Conservative Review stated his conclusions this way, “It’s truly hard to overstate the significance of this development. Thirteen of the 28 Republican senators didn’t stand for re-election. Out of the 15 remaining, nine were defeated, and several RINO House members seeking a Senate seat lost to conservatives. There is almost no parallel to that in recent history. While some of the races involved other quirks or were due to redistricting, and a few others were conservatives who were defeated by more ideologically ambiguous candidates, for the most part, conservatives downed many liberal Republicans and made gains in open seats.”  See: Two GOP senators urge President Biden to yank the US out of the ‘corrupt and inept’ World Health Organization

The Press, of course found someone to make a statement that made most of us scratch our heads in amazement.  The Press trotted out someone to be their mouthpiece, here are their quotes, “Former Idaho Lt. Gov. Jack Riggs said the results of statewide races illustrate a disconnect between Kootenai County voters and other Idahoans.  “There are still good, conservative Republicans voting statewide,” Riggs said.”

The fact that Riggs thinks that there are “good conservative” voters statewide tell you what they think of the voters in Kootenai County.  Hundreds of volunteers donated thousands of hours to distribute materials door to door for candidates.  Several meetings every week with candidates speaking and giving their platforms to the voters – if anything the local voters took advantage of the information and voted their conscience.  The Press lacks any self-awareness in that fact that NOT ONE of their endorsements were elected.  The megaphone they had was loud and required a lot of shoe leather to overcome, but the voters did it and soundly rejected Mike Patrick and the leftist attacks.  The Patricks apparently are moving to Florida to join Nancy Pelosi and other liberal refugees seeking freedom.  What will the Press do now?  Will they moderate their stance and actually become a forum where issues are debated?  We will see.

We must never forget that we are in a spiritual war.  The fighting is on the front lines and we can’t quit now.  Daniel Horwitz concluded, as follows, “Had there been a runoff option, the races might have picked up more momentum and could have become contested. With less vote-splitting and slightly stronger candidates, conservatives can truly take over the state next time.”

School board races, college trustee elections, city council race all need our attention.   Be involved and do your homework.  Pray.