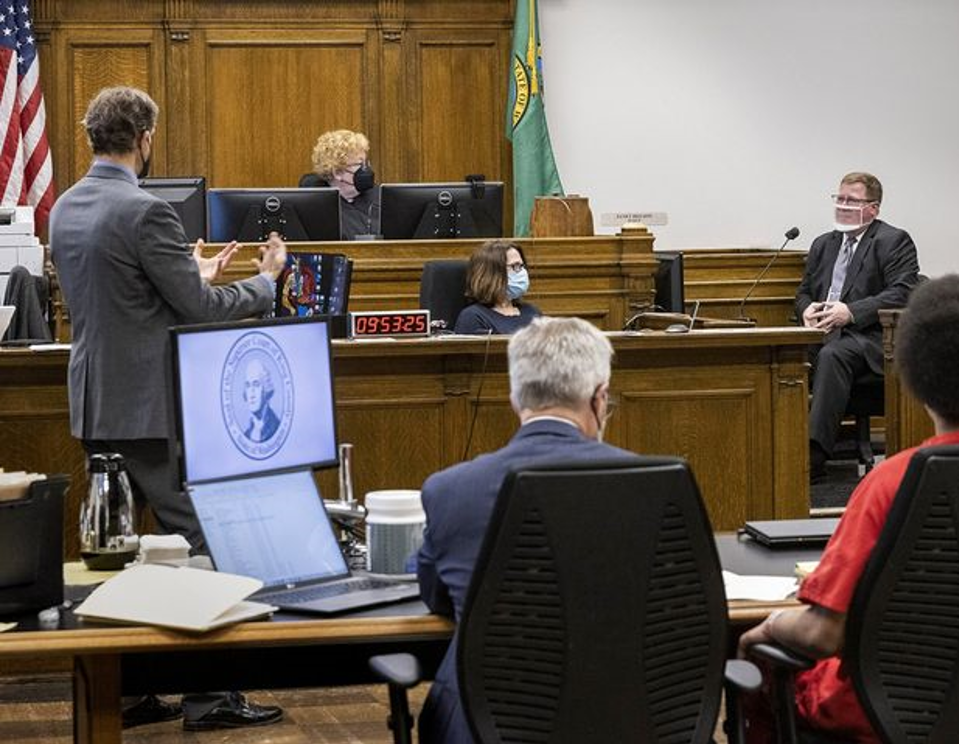 Matt Lapin spent the first dozen years of his legal career as a deputy prosecutor — and the last dozen as a private criminal defense attorney.

He was officially sworn in as the newest member of the King County Superior Court bench earlier this month, becoming the 11th judge to don black robes since the start of the COVID-19 pandemic.

Lapin’s criminal trial experience is a boon for the 54-member bench as judges, attorneys and jail corrections officers struggle to address an unprecedented pileup of criminal cases caused by slowdowns in court operations, a result of the pandemic. At the same time, an ongoing spike in violent crime continues to feed new cases into the legal system, whose players are also contending with staffing challenges and experience gaps affecting how quickly cases are resolved through trials or plea agreements.

At the height of the pandemic, the county had more than 6,000 pending felony cases, nearly double its historical average. That number now stands at about 4,800.

But Dan Clark, King County’s chief criminal deputy prosecutor, said that while the sheer number of cases is troubling, the seriousness of the alleged crimes is also cause for concern. Before the pandemic, two-thirds of the felony cases filed by prosecutors were for less serious crimes, like burglaries and car thefts, with violent crimes against people making up the remainder, Clark said.

Now violent crimes account for more than half of new felony case filings, he said, while the number of cases resolved through plea agreements has dropped precipitously.

The backlog includes more than 230 murder cases and 500 sexual assault cases, and it’s expected to take years for all of them to be adjudicated.

In his transition from advocate to judge, Lapin said his new job is to make sure the parties that come before him get a fair trial and feel the system works.

“It’s very daunting,” Lapin, 53, said of the criminal case backlog. “I have a tremendous learning curve in a lot of areas, but on the criminal side, I can hit the ground running.”

Lapin is among a wave of new superior court judges who will play key roles in resolving the county’s backlog of criminal cases.

Thirty-two other judges have been sworn in over the last five years, and a handful of judges have temporarily come out of retirement to help move cases along.

Their mission of tackling the backlog is about ensuring access to justice, said Presiding Judge Patrick Oishi.

“We have defendants who’ve been in custody a long time and alleged victims who’ve been waiting for their day in court for a long time,” he said. “That’s why it’s an urgent priority.”

While other courts across the region and country shut down during the pandemic, King County Superior Court — which handles a wide range of criminal, civil and family law matters — slowed operations but never completely closed.

Civil trials were temporarily moved to the Meydenbauer Center in Bellevue, and virtual appearances and hearings became commonplace. Family law matters, for example, are now addressed exclusively via video.

But criminal trials must be heard in person at the county’s Seattle and Kent courthouses for security reasons — and to protect defendants’ constitutional rights and maintain chain of custody of evidence.

COVID-19 protocols compelled court officials to suspend criminal jury trials three times — for roughly 10 months total — and some safety measures remain in place as trials begin to ramp back up.

For each jury trial, two courtrooms are still needed: One for the trial itself and a second to serve as a jury room to give jurors space to spread out during breaks and deliberations.

The reduced capacity in both King County courthouses means priority is being given to the oldest cases — mostly from 2018 onward — involving violent crimes like murder, rape, armed robbery and assault. Masks still must be worn in courtrooms but are now optional in hallways and other public areas.

Perhaps the biggest enduring change is that voir dire — where attorneys question prospective jurors before selecting a panel — is being conducted remotely. Pre-pandemic, as many as 400 people would respond to jury summons and spend two days at the courthouse, waiting to see if they would be assigned to participate in voir dire for an upcoming trial.

Now, prospective jurors report via Zoom for two hours, eliminating the cost and inconvenience of taking days off from work, arranging child care, traveling to the courthouse and paying for parking and meals.

Since jurors are still only paid $10 a day — a rate that’s gone unchanged since the 1950s — many judges see remote voir dire as a way to involve more people in the criminal legal process while also showing greater respect for their time.

Only jurors who are selected are required to show up at court once a criminal trial gets underway.

“It takes a lot more time to do a lot less,” said Judge John Ruhl, who retired at the end of April and was replaced by Lapin. “There’s always a glitch electronically or a juror who can’t get connected.”

That said, “jury selection is a wonderful thing now for jurors,” said Ruhl, even though remote voir dire adds several days to trials for attorneys, bailiffs and judges because only 20 prospective jurors can be questioned at a time.

Lapin, who represented defendants in a rape and two murder trials before becoming a pro tem judge in November, said remotely selecting jurors resulted in “some of the most diverse juries I’ve ever seen,” with more jurors of color and a greater range of ages participating in the process.

“It’s so much more convenient for [prospective jurors] to show up, and it’s less of a hardship,” he said.

Deputy prosecutors and public defenders are also shouldering the weight of the criminal case backlog.

Clark, the chief criminal deputy prosecutor, and Gordon Hill, the deputy director of the King County Department of Public Defense, both said their most experienced trial attorneys are juggling unprecedented caseloads.

Attorneys left both law offices during the pandemic, and court slowdowns kept less experienced attorneys from getting the experience they need to handle the most serious criminal cases.

Though prosecutors and public defenders received millions of dollars in COVID-19 relief funds last year and are using some of the money to help fill their ranks, it’s been tough to attract attorneys with criminal law experience, Clark and Hill said.

“Private law firms are also hiring, and they can offer much more competitive salaries than we can,” Clark said. “Especially in King County, with housing prices the way they are, it is really hard to attract new attorneys into these positions.”

Before the pandemic, 80% to 90% of criminal cases ended with plea agreements, far outnumbering the 300 cases that go before a jury each year, Clark said. But for reasons that aren’t fully understood, the number of people entering guilty pleas has dropped off considerably from the pre-pandemic average of 350 a month.

“We have not yet gotten a single month where our resolutions are at or above our historic average, which means that every single month, we have added to that backlog,” Clark said.

At the same time, prosecutors nationwide are dealing with fallout from the spike in violent crime seen during the pandemic, he said.

Crime also continues to be a problem near the Seattle courthouse.

Chief Criminal Judge Karen Donohue said someone used a golf club to smash most of the courthouse’s street-level windows along Fourth Avenue a few weeks ago and that a man was recently stabbed nearby.

Painted plywood covers most of the first-floor windows along Fourth Avenue, outside the King County Courthouse. An unknown person used a golf club to smash the glass panes in late April. (Sara Jean Green / The Seattle Times) 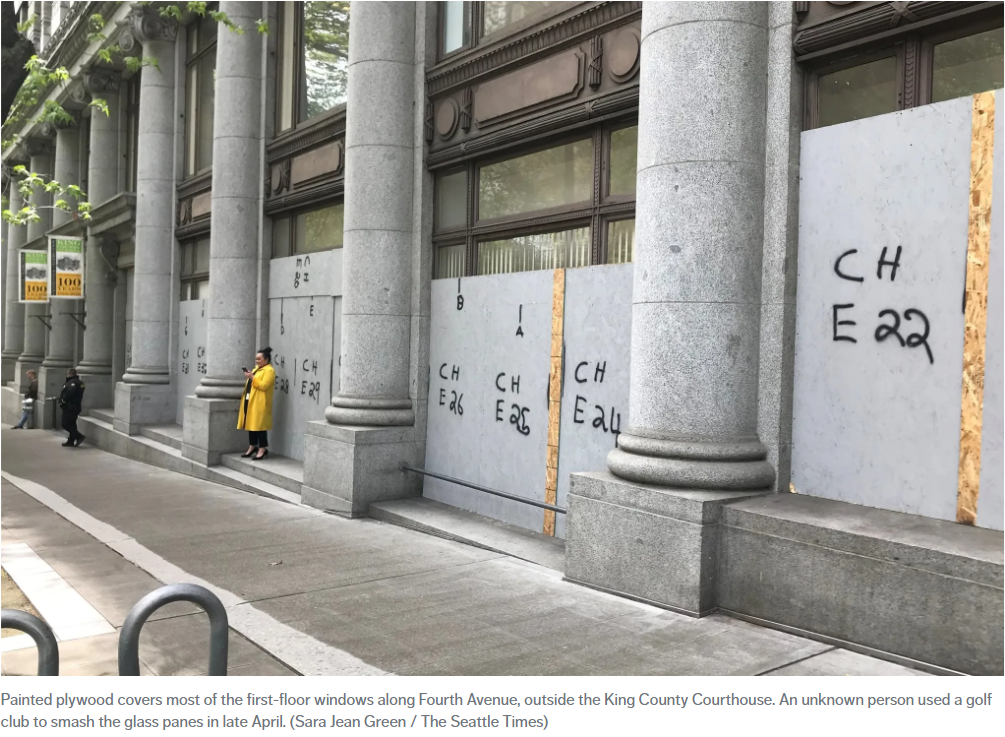 And while security concerns were somewhat abated after a large homeless encampment was removed from the park next to the courthouse in August, Donohue said open-air drug dealing continues at Prefontaine Plaza across Third Avenue.

That’s made it difficult to get interpreters back in court, she said, “because of the perceptions and safety issues in coming back downtown.”

People who have remained in jail as they wait for their criminal cases to be resolved are spending up to 23 hours a day in isolation because of the long-running staffing shortage at the county’s two jails, Hill said.

Interpreters have not returned to making in-person jail visits, creating communication barriers for attorneys and some of their clients, he said. Rules limiting jail visits by defense investigators and mitigation specialists, who assess clients and help develop defense strategies, have also slowed cases down, Hill said.

Meanwhile, jail visiting booths also have not reopened for attorneys to meet with their clients, and while there have been opportunities for phone and video consultations, those conversations aren’t confidential, he said.

“Without that, it’s very difficult to move cases forward,” Hill said, noting that attorney-client confidentiality is a basic tenet of the criminal legal system. “So the jail staffing problems have reverberated almost exponentially in our office.”

The King County Department of Adult and Juvenile Detention has the budget for 503 corrections officers and 40 sergeants, but as of January, 90-some officer positions and three sergeant positions were unfilled.

Corrections officers, who are frequently required to work mandatory double shifts, each received a $4,000 retention bonus earlier this year. The department is hiring new officers, but “we still have more people going out the door than coming in,” said Dennis Folk, president of the King County Corrections Guild.

As criminal jury trials have ramped up, the staffing shortage has added to the strain, since one to four corrections officers are needed per trial to escort defendants to and from court and provide security during trials and hearings.

Those officers typically have at least 15 years of experience, are certified to carry guns and have received additional training in de-escalation tactics and the use of less-lethal weapons, Noah Haglund, a DAJD spokesperson, said in an email.

Folk, who typically books people into the jail at the Maleng Regional Justice Center in Kent, said he and another bookings officer, plus two other officers from the training division, were recently reassigned to boost the court detail and provide security for two murder trials that started this week.

During what is supposed to be a two-week reassignment, Folk said the RJC’s booking desk will be closed, which means law enforcement officers who make felony arrests in the county’s south end will have to drive to downtown Seattle to book people into the King County Jail.

With more murder trials on the horizon, Folk said he’s pressing jail commanders to come up with a permanent plan to provide adequate coverage for the court detail.

“It’s a huge mess,” he said. “You’re putting a Band-Aid on an arterial problem.”