Canada: the World’s Most Comfortable Gulag 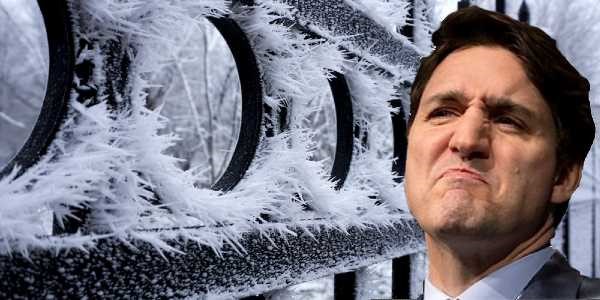 Learning to live with fascism, one edict at a time

Canada: the World’s Most Comfortable Gulag

In an editorial for the Epoch Times, Patricia Adams and Lawrence Solomon describe Canada as the world’s largest prison and Prime Minister Justin Trudeau as “the world’s foremost jailer.” In a country of 38 million, they write, reprising a Justice Centre bulletin, 6 million unvaccinated citizens are forbidden to travel by train, ship or plane and are effectively prevented from leaving the country, which is to say that a cohort of over 15 percent are prisoners in their own land.

The 2022 Federal Budget approves funding for three more years of continuing vaccine mandates for travel: “All travelers now departing from Canadian airports, on VIA Rail and Rocky Mountaineer trains, or on cruise ships (or non-essential passenger vessels on voyages of 24 hours or more) must be fully vaccinated, with very limited exceptions.” The unvaccinated, as they say, can take a hike. But the Trudeau government will not stop with the de facto incarceration of its dissident citizens. The docket of authoritarian acts grows longer by the day.

The government has recently passed Bill C-4, amending the Criminal Code in order to target what is pejoratively and misguidedly called “conversion therapy,” that is, the right of parents to act on behalf of their children’s wellbeing by counselling against gender modification and chemical transgender treatments. The government has contended that conversion therapy reflects “myths and stereotypes about lesbian, gay, bisexual, transgender, queer and Two-Spirit (LGBTQ2) communities” and that practices that “reinforce heteronormative and cis-normative ideas… [are] harmful.”

This bizarre document is framed in such a way as to give the impression that LGBTQ2 orientation is actually the default sexual status. Protecting one’s children’s biological sexual identity is now a criminal offense, leading to children being removed from the home and becoming wards of the state, an act of totalitarian state terror. Naturally, couples without children are spared the trauma; many appear to be indifferent or are even unaware of such an atrocity.

The federal government is pondering legislation, such as Bills  C-11 and C-18, also known as the Online Streaming Act, analogous to the U.S. government’s just created Disinformation Governance Board, which will increase regulation of the Internet to combat what the government conveniently calls “disinformation.” People will no longer be free to express their personal convictions online without fear of cancellation or even worse.

The next step is the newly formed Canada Financial Crimes Agency (CFCA), clearly intended to block popular crowdfunding sources such as those upon which the Truckers Freedom Convoy relied. Legitimate protests will be starved of financial support. Individuals who donate to such movements will also be exposed to financial penalties.

Furthermore, not content with having bought off the Canadian print media with lavish multi-million-dollar “gifts,” Justin Trudeau has established a so-called Qualified Canadian Journalism Organization (QCJO) which renders certain unfavored news outlets like Rebel News ineligible for tax credits and other programs. According to the assessment of the Canadian Revenue Agency, (CRA) “Rebel News does not produce original news content, on the basis that the content was found to be largely opinion-based and focused on the promotion of one particular perspective.” For such federal agencies, truthful reporting by independent sources unbeholden to government subsidies, a rarity in this country, can only be partisan opinion to be suppressed or rendered difficult to locate.

The Trudeau government is now considering implementing a digital ID program, paired with a digital currency, in which all our financial, health, social media and other accreditation records, such as social insurance number, drivers license, vaccine status, etc., will be stored in one area, an apparatus promoted by Great Reset protocols and resembling China’s “Social Credit” and Central Bank Digital Currency systems where citizens’ every action can be tightly monitored and controlled.

These communication technologies and currency manipulations are tantamount to human rights violation machines. Using the FINTRAC system, originally meant to survey money laundering and terrorist financing operations, the government can shut down bank accounts without court warrants and suspend credit cards and other financial assets at will. The resemblance to the National Socialists’ Enabling Act of March 23, 1933, especially Article 2 which specified that “laws enacted by the Government may deviate from the Constitution,” is quite distressing. In the present context, mutatis mutandis, the April 26, 1938 Decree for the Reporting of Jewish-Owned Property, effectively freezing the assets of Jews at a certain prescribed limit, is no less disturbing.

That is only the beginning. As political commentator Diana Sitek writes, “We are becoming monetized data,” an apt phrase. One’s “digital wallet” can be pilfered at any time by the government, a form of digital mugging. “Creating digital IDs and digital currency,” warns The Trumpet, “is all about government control.” The political authority would know everything there is to know about us, track our movements and activities, and intervene at any time to “shut us down.” These are the kinds of measures adopted by a police state. The right to hold “unacceptable views,” the freedom to dissent from the government line and its authoritarian agenda, and the ability to lead our lives as we see fit, are being efficiently suffocated.

Admittedly, at present, we are experiencing what seems to be the lull before the storm. Many of the coercive Covid mandates, for example, have been relaxed. We enjoy a degree of municipal freedom. My wife and I can now shop unmasked and patronize restaurants for the first time in the better part of a year. We no longer need a QR code to visit the planetarium, scope out the museums and theaters, take in a movie or a symphony, attend a wine tasting, or enjoy the paintings of my favorite Canadian painter Jack Shadbolt at the Shadbolt Centre for the Arts, which I had been unable to visit though it is only a half hour’s drive away.

Within the confines of our cage, we are now reasonably comfortable. But as former CF-18 fighter pilot and Aviation Project Engineer Major Russ Cooper, president and CEO of the C3RF non-profit, points out, “The mere cancelling of pandemic measures on the heels of their seasonal recession is just not good enough. What good would it do if all of the same factors were allowed to combine in a future emergency so that Canadians, once again, were forced into a ‘Gulag’?”

Canada is in the global forefront of these malignant initiatives

He is right, of course. Under the demagogic rule of Justin Trudeau, there is every likelihood that our assets will be frozen, a sixth, seventh or eighth politically manufactured “viral wave” will force us to mask up again or remain indoors, articles such as this one will be inaccessible as constituting “hate speech” or, according to the aforementioned proposed Parliamentary bills and more to come, causing “online harms,” and the vaccine passports, as noted, will be reintroduced and extended for travel. A redoubtable fighter for civil rights, former Newfoundland and Labrador premier and the last living signatory to the 1982 Canadian Constitution and Charter of Rights and Freedoms the Honourable Brian Peckford is currently mounting a Federal Court challenge to the ban, but I fear, despite his qualified confidence, that the outcome remains problematic.

Canada is in the global forefront of these malignant initiatives. Justin Trudeau, as some believe, may be a nasty piece of work but he is not, in himself, to be condemned solely. He is the people’s doppelgänger, a projection of the vaxxed majority who believe in the validity of his despotic measures and proclamations, who care nothing for the Constitution, are content to have their rights and liberties gradually erased, have no objection to becoming digitized, and have learned to hate as virulently as does the prime minister. “Populace duped, politicians deranged,” summarizes Peter Smith in The Pipeline.

Put another way, Trudeau is a “social construct,” invented by the electorate. The moment the public sees through the façade of counterfeit charm and smarmy concern for “the Canadian people,” Trudeau would vanish in a puff of Woke. Regrettably, none of this is likely to happen. We have nothing like the American 2022 midterms to mitigate the advent of despotism. We are stuck with Trudeau and the Liberal/NDP coalition deal until 2025 and perhaps longer, by which time Canada will have ceased to exist as a liberal democracy. As Milan Kundera presciently wrote of the totalitarian dream in The Book of Laughter and Forgetting, once it “starts to turn into reality, however, here and there people begin to crop up who stand in its way, and so the rulers of paradise must build a little gulag on the side of Eden. In the course of time this gulag grows ever bigger and more perfect.”

Barring an unforeseen change of course, a dark future is fast foreclosing

Former prime minister Pierre Trudeau famously said that the state has no place in the bedrooms of the nation. Neither does the state, as Peter Menzies writes, have any business in the newsrooms of the nation. No less true is that the state has no place in the bank accounts and private affairs of its citizens, a lesson the son has failed to assimilate. The major lesson the Son of Pierre has no intention of learning is that a tyrannical regime has no place in the life of a democratic nation. But this is what we have come to expect. Barring an unforeseen change of course, a dark future is fast foreclosing. Sauve qui peut.

David Solway is a Canadian poet and essayist. He is the author of The Big Lie: On Terror, Antisemitism, and Identity, and is currently working on a sequel, Living in the Valley of Shmoon. His new book on Jewish and Israeli themes, Hear, O Israel!, was released by Mantua Books. His latest book is The Boxthorn Tree, published in December 2012.