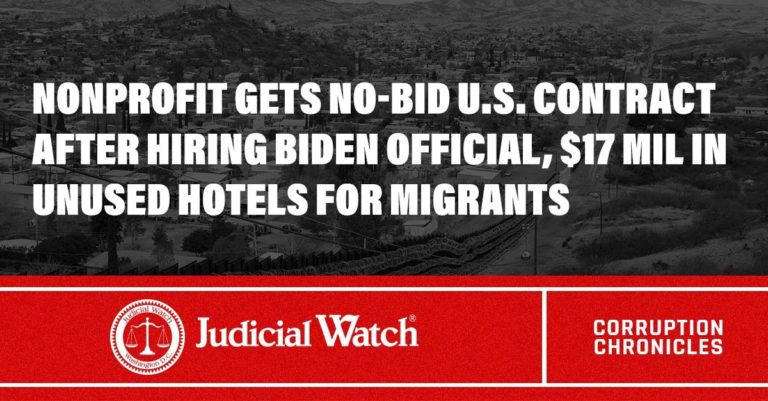 A nonprofit that hired a Biden administration official received a huge no-bid government contract that wasted $17 million on unused hotel rooms for illegal immigrants, a federal audit reveals. The politically connected group, which had no experience providing the services covered by the sole source federal contract, also failed to meet COVID-19 health protocols required by the government when the deal was signed. The highly questionable arrangement was executed by Immigration and Customs Enforcement (ICE), the Homeland Security agency responsible for housing migrant families in detention. The agency typically uses Family Residential Centers (FRC) to house family units, but in early 2021 ICE anticipated increased apprehensions of illegal immigrant families along the southern border and awarded a contract to harbor them in hotels while completing intake processing, auditors from the Department of Homeland Security (DHS) Inspector General explain in a recent report.

The group that received the lucrative no-bid award, Endeavors, had never provided beds or all-inclusive emergency family residential services when ICE hired it to do so, auditors found. Formerly known as Family Endeavors, the Texas based nonprofit claims to passionately serve vulnerable people in crisis through its innovative, personalized approach. Last year a national news outlet reported that Endeavors won a colossal $530 million government contract just months after it hired Biden administration official Andrew Lorenzen-Straight as its senior director for migrant services and federal affairs. The contract is by far the largest ever awarded to the nonprofit, according to the article, and is potentially worth more than 12 times the group’s most recently reported annual budget. Lorenzen-Strait, a former ICE official who also advised the Biden-Harris transition team on Department of Homeland Security (DHS) policy and staffing matters, must have pulled some strings.

The recently published audit focuses on an $87 million chunk of the Endeavors deal to increase housing capacity for detained migrant families early last year. The sole source contract was for approximately six months, from March to September 2021, to provide 1,239 beds and other necessary services in hotels. Because ICE did not seek multiple bids for the work as it is obligated to do, the agency blindly agreed to pay for a block of more than 1,200 hotel rooms, regardless of how many got used. It resulted in $17 million worth of hotel rooms that remained mostly empty, the DHS IG found. “ICE did not adequately justify the need for the sole source contract to house migrant families and spent approximately $17 million for hotel space and services at six hotels that went largely unused between April and June 2021,” the reports states. “ICE’s sole source contract with Endeavors resulted in millions of dollars being spent on unused hotel space.”

The DHS watchdog reveals that the deal was penned after Endeavors provided an unsolicited proposal for housing migrant families in hotels. Government agencies typically receive proposals from contractors after putting out requests for proposals. “However, Endeavors provided a proposal without such a request from ICE,” investigators found. ICE then cited “unusual and compelling urgency” as the basis for an exception to the competitive contracting process. The agency’s justification noted that Endeavors was the only known source capable of meeting the requirements to provide 1,239 hotel beds and all-inclusive emergency family residential services to support the surge of asylum seekers. “Based on our analysis of ICE’s justification for sole sourcing the contract to Endeavors, we determined ICE did not have supporting documentation to establish that Endeavors was the only contractor that could provide the services needed,” the DHS IG writes.

Additionally, Endeavors did not meet the government’s healthcare protocols or ensure proper COVID-19 testing for families. “For example, families were not tested by ICE for COVID-19 prior to being transported to hotels and were not always tested by Endeavors staff upon arrival at or departure from hotels, putting migrant families and the outside population at risk of contracting COVID-19,” the report states. “Further, Endeavors did not follow required ICE standards to ensure the proper care for housing migrant families while such families were residing in its facilities.”