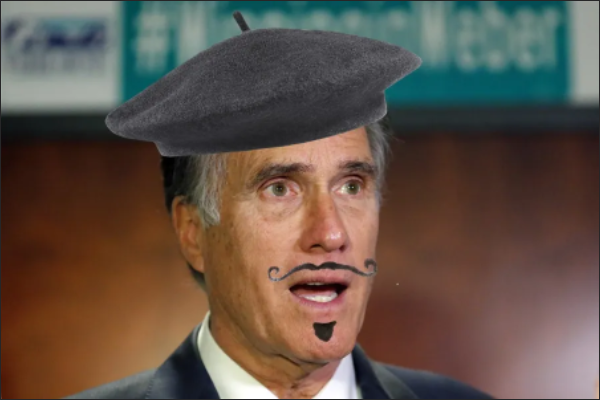 He wears hats so the Trump supporters don’t pick him out, a family friend told the authors of the new book “This Will Not Pass: Trump, Biden, and the Battle for America’s Future.”

“If he were recognized by Trump supporters there, there was a good chance he would be harassed,” New York Times reporters Jonathan Martin and Alex Burns wrote. Former President Donald Trump’s Mar-a-Lago resort is also in Palm Beach.

He has NOT been harassed in Florida. It’s just a book soundbite. The book is probably not worth the $25 or so that it will cost.

During a vile interview with The Atlantic, during which Romney expressed his usual hatred for the President, Romney made the revelation that he had a secret Twitter account.

According to the article, he explained that he uses a secret Twitter account—“What do they call me, a lurker?”—to keep tabs on the political conversation. “I won’t give you the name of it,” he said, but “I’m following 668 people.” He gave the names of some accounts he follows.

Hours later, Slate published a report that identified Romney’s secret Twitter account as Pierre Delecto, in English that’s Peter Delight. That is a perfect name for a globalist pompous ass.

He has since admitted the sneaky page with the bizarre name is his. He didn’t tweet much. Mostly, he was just sneaking around.

Ironically, he calls Trump a phony and a fraud.

BACK TO THE BOOK – THEY’RE SCARED

As Republicans embrace Donald Trump, Romney’s wife Ann said they were all fearful for their safety, the authors wrote. She told the authors that her five sons were proud of their father but unsure about the Republican Party.

“Trump’s dominance, she said, made it uncertain whether any of the boys could run for office as Republicans,” the authors wrote.

This is ironic, Trump supporters fear him. He supports Black Lives Matter, a violent, communist organization funded by George Soros, and the RINO backs up Pelosi when Conservatives need him. We’re not sure why Romney runs as a Republican.