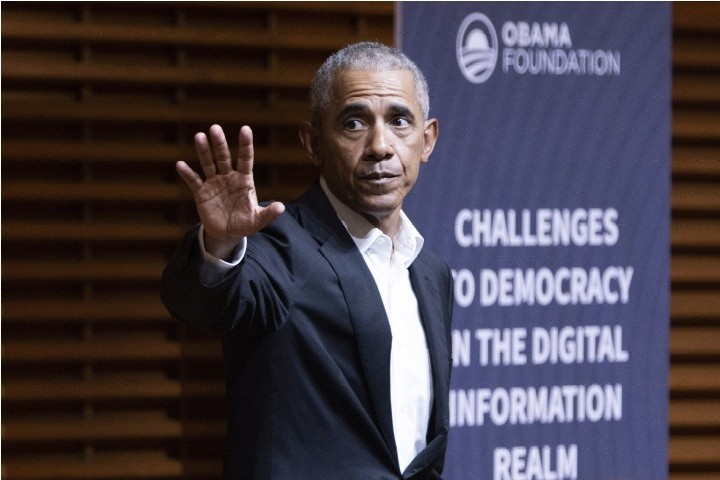 On Thursday, former president Barack Obama came out solidly in favor of big-tech censorship in its online platforms. In remarks delivered at Stanford University, Obama claimed that not cracking down on thought he considers “disinformation” would allow “democracy to wither.”

At a conference entitled Challenges to Democracy in a Digital Information Realm, the former president laid out the case for further regulation of big tech companies such as Facebook and Twitter.

Claiming to be “pretty much a free speech absolutist,” Obama outlined his reasons to silence free speech on social-media platforms. The 44th president decried nations such as China for “telling people what they can or cannot say or publish, while trying to control what others say about their country abroad.”

Obama also said that he doesn’t “have a lot of confidence that any single individual or organization, private or public, should be charged or do a good job determining who gets to hear what.”

Nevertheless, the former president doesn’t believe that anyone should hear opinions that differ from the largely fabricated mainstream narrative on social media.

“That said, the first amendment is a check on the power of the state. It doesn’t apply to private companies, like Facebook or Twitter, any more than it applies to editorial decisions made by the New York Times or Fox News. Never has. Social media companies already make choices about what is or is not allowed on their platforms, and how that content appears, both explicitly through content moderations, or implicitly through algorithms.”

Obama called out Russian leader Vladimir Putin and former Donald Trump associate Steve Bannon as exemplary of the “raw sewage” of disinformation available on social-media platforms, and insisted that their ultimate goal was to “weaken democratic institutions.”

“People like Putin, and Steve Bannon for that matter, understand it’s not necessary for people to believe disinformation in order to weaken democratic institutions. You just have to flood a country’s public square with enough raw sewage, you just have to raise enough questions, spread enough dirt, plant enough conspiracy theorizing, that citizens no longer know what to believe,” Obama said.

“Misinformation” regarding Covid-19, Obama complained, was a large reason why so people died of the virus.

“Take Covid. The fact that scientists developed safe, effective vaccines in record time is an unbelievable achievement. And yet, despite the fact we’ve now essentially clinically tested the vaccine on billions of people worldwide, around one in five Americans is still willing to put themselves at risk, and put their families at risk, rather than get vaccinated. People are dying, because of misinformation,” Obama theorized.

The solution? According to the 44th president, Big Tech companies are ripe for good, old-fashioned government intervention. Given Big Tech’s oversized role in how news and information is consumed in the current day, the former president believes that government regulation is the answer.

“With that power comes accountability. And in democracies like ours at least, the need for some democratic oversight,” Obama said.

Not really a thing that a person who refers to himself as “pretty much a free speech absolutist” should believe. If government regulates what occurs on social media, then it’s government attacking the First Amendment.

But only government can truly address the issue, if one believes Obama.

“Here in the United States, we have a long history of regulating new technologies in the name of public safety, from cars and airplanes to prescription drugs to appliances,” Obama said. “And while companies initially always complain that the rules are going to stifle innovation and destroy the industry, the truth is that a good regulatory environment usually ends up spurring innovation, because it raises the bar on safety and quality. And it turns out that innovation can meet that higher bar.”

Citizens, according to Obama, also bear responsibility to only consult the most reputable of news sources.

“So, as citizens, we have to take it upon ourselves, to become better consumers of news, looking at sources, thinking before we share, and teaching our kids to become critical thinkers who know how to evaluate sources, and separate opinion from fact,” Obama declared.

Critical thinking is only possible when presented with various viewpoints. If you’re only presented with one side of an issue, it’s nearly impossible to think critically about it.

President Obama seems to be lamenting “the good old days” when the only narrative available was the one created by the mainstream media. Instead of being pleased that there are more and varied sources of information, the former president could only decry what he referred to as “disinformation” or “misinformation.”

For people such as Obama, the main reason for competing ideas to be suppressed is because their own ideas can’t stand up to any scrutiny. People such as Obama aren’t concerned so much about “disinformation” as they are with stifling ideas that might run contrary to their way of thinking.