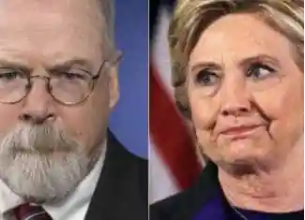 The Clinton campaign won’t turn over records to Special Counsel John Durham for the Michael Sussman trial. The documents sought surround the Alfa Bank hoax. The campaign claims it falls under attorney privilege. Durham responded — with subpoenas! Now they have to say all this under oath.

The 2021 Grand Jury Subpoena from Special Counsel Durham to Georgia Tech, et al demanded records concerning the Alfa Bank/Trump hoax, and the purported use of Russian Yotaphones in Trump’s vicinity.

At that point, Hillary For America intervened in the Sussmann case with an artifice. The campaign says the Perkins Coie-Fusion GPS communications and their work product are “privileged.” How is it privileged, you ask? Robby Mook swears under oath that Fusion GPS was retained to provide “legal services and legal advice.”

You are to believe that the dossier and Alfa-Bank conspiracies were only to give Hillary advice. Fusion GPS poisoned the public with deceitful “opposition research.” And the Clinton Campaign won’t surrender the documents.

Special Counsel John Durham responded. He “issued trial subpoenas to the Clinton Campaign and the Democratic National Committee.” If they want to keep privileged Fusion GPS communications, they’re gonna have to do it under oath.

“America, meet Simpson, Fritsch, & Oppo—the country’s newest, if not its most prestigious, law firm. At least that’s what the purveyors of the Russia collusion hoax are now peddling to the judiciary, part of a last-ditch effort to conceal the truth of their actions,” Kimberly Strassel reports in an Opinion piece at the Wall Street Journal.

“That absurd claim is the only refuge left to the first high-level campaign called out for funneling its political operations through a law firm,” Strassel continues.

As she said, Democrats and Republicans alike have listed controversial contractors as “legal services” to avoid disclosure.

“Mr. Durham is performing the dual service of unraveling the Russia hoax and exposing a longtime Washington racket,” she says.

The lies and ruses are catching up with them. The Durham case has a long way to go. 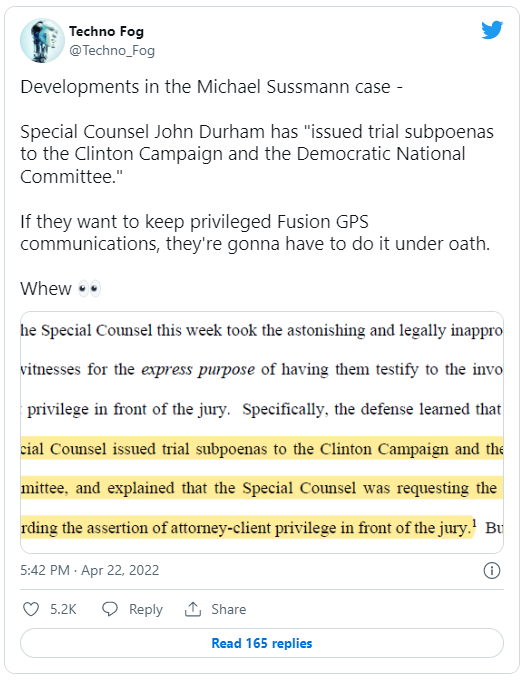