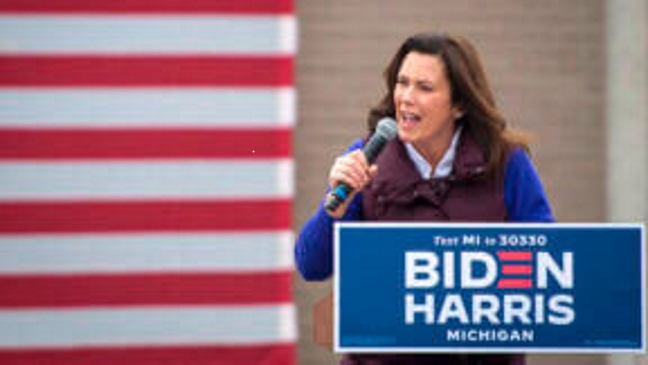 The only people pushing to do something big before Election Day resided in the J. Edgar Hoover Building in Washington, D.C.

On October 8, 2020, Michigan Governor Gretchen Whitmer announced shocking news: federal authorities had arrested several men for conspiring to kidnap and possibly kill her before Election Day. After indulging in a moment of self-pity, Whitmer quickly pinned the blame on President Trump, a man with whom Whitmer had engaged in a very public feud throughout 2020 over pandemic-related lockdowns.

Trump, Whitmer claimed, fueled the rage of alleged white supremacists and right-wing militias responsible for the dastardly abduction plot. “When our leaders meet with, encourage, or fraternize with domestic terrorists, they legitimize their actions,” Whitmer said in a televised speech. “And they are complicit.”

Earlier that day, Michigan Attorney General Dana Nessel, also a Democrat, and officials from the U.S. Department of Justice detailed the charges in a separate press conference. “Last night, the FBI and Michigan State Police arrested six individuals charged in a criminal complaint with conspiring to kidnap the governor of Michigan, Gretchen Whitmer,” explained Andrew Birge, assistant U.S. Attorney for the Western District of Michigan. The defendants, Birge claimed, plotted to kidnap Whitmer from her vacation cottage “before the November election.”

His office took the lead in prosecuting the six defendants, who also faced weapons of mass destruction charges.

Exactly 18 months to the day, Birge’s prosecutors suffered a humiliating defeat in a Grand Rapids courtroom after a jury acquitted two of the men and deadlocked on the guilt of two others. (Two defendants pleaded guilty and testified for the government during the three-week trial). Despite endless resources and favorable rulings by the judge overseeing the case, the government failed to secure a single conviction in what the Justice Department considered one of its largest domestic terror investigations ever.

Daniel Harris and Brandon Caserta, after a year and a half in prison, went home to their families on Friday night; Adam Fox, the alleged ringleader, and Barry Croft, Jr. remain incarcerated while Birge’s office prepares to retry the men—a fool’s errand, as they didn’t know each other prior to the FBI’s involvement in the faux plot and live almost 1,000 miles apart. (Croft resides in Delaware.) It’s a desperate attempt to save face, regardless of the lives and the principles of justice at stake.

Not only were jurors unpersuaded by Birge’s prosecutors, the jury instead seemed to believe defense attorneys’ arguments that their clients were entrapped by the FBI. At least a dozen FBI undercover agents and informants, working out of numerous FBI field offices across the eastern half of the country and at the direction of supervising agents, concocted and funded the sting operation. Dan Chappel, the main informant compensated at least $60,000 by the FBI for “bringing people together,” as his FBI handler ordered him, took the stand to explain his role. But his testimony was lackluster and ultimately did not convince the jury the men were guilty.

The Justice Department and FBI have lots of explaining to do—so, too, does Andrew Birge. Hundreds of hours of secret recordings and thousands of texts fail to prove what Birge said in his initial press conference: there was no evidence to support his claim that the defendants wanted to “kidnap” Whitmer before Election Day. After all, if no kidnapping conspiracy or legitimate threat existed, no deadline existed, either.

The only people pushing to do something big before Election Day resided in the J. Edgar Hoover Building in Washington, D.C..

In a redux of the 2016 Trump-Russia collusion farce designed to sabotage Trump before Election Day, the FBI used its powerful resources to again interfere in a presidential election to help the Democratic nominee for president. News of the arrests made national headlines for days; Joe Biden made the most of the political gift to his campaign. “There is a throughline from President Trump’s dog whistles and tolerance of hate, vengeance, and lawlessness to plots such as this one,” Biden said in a statement released on October 8, 2020. “He is giving oxygen to the bigotry and hate we see on the march in our country.”

At a campaign stop with Kamala Harris in Arizona later that day, Biden blasted Trump for his alleged coddling of “white supremacists” and accused the president of “breath[ing] oxygen to those who are filled with hate and danger.” A week later, in an unhinged tirade at another campaign event in Michigan, Biden continued to blame Trump. “All President Trump does is fan the flames of hatred and division in this country!” Biden screamed from the stage. “What the hell’s the matter with this guy? When the president tweeted ‘Liberate Michigan, Liberate Michigan,’ that’s the call that was heard. That was the dog whistle.”

The media portrayed Whitmer as a victim of Trump’s bullying—and Whitmer fully embraced the role. In a Washington Post op-ed published on October 9, 2020, Whitmer accused Trump of encouraging “domestic terrorists.” When a sympathetic Chuck Todd interviewed Whitmer on “Meet the Press” several days later and asked how she was personally coping with the pretend threat against her, Whitmer condemned the president for continuing to criticize her lockdown policies “after a plot to kidnap, put me on trial and execute me,” was uncovered. She again accused Trump of inciting “domestic terrorism,” a claim she repeated during an interview with MSNBC’s Rachel Maddow on October 21, 2020.

Journalists and commentators played their parts, resulting in nonstop negative coverage for the president related to the plot. Trump walked out of an interview with “60 Minutes” host Lesley Stahl in late October 2020 after she hounded the president for his comments about the Michigan governor. And none other than disgraced FBI-chief-turned-CNN-contributor Andrew McCabe, an inside promoter of the Russian collusion hoax while at the FBI in 2016 and 2017, said Trump was responsible for “fomenting this kind of unrest, this sort of division, this sort of violence.”

But the FBI’s interference in the 2020 election was far more flagrant and effective than what the agency attempted in 2016. Wall-to-wall headlines blaming Trump for the Whitmer plot coincided with early voting across the country, including an unprecedented volume of mail-in ballots. It’s impossible to know how the coverage, including Whitmer’s nonstop publicity tour and Biden’s campaign temper tantrums on the subject, influenced voters in swing states such as her own.

How could it not?

Without suffering any consequences for propagating the Russiagate hoax, the FBI clearly felt emboldened in 2020 to accelerate its election interference chicanery. And if there are no consequences for this egregious operation, Americans can be sure the FBI will try it again soon—like this November.