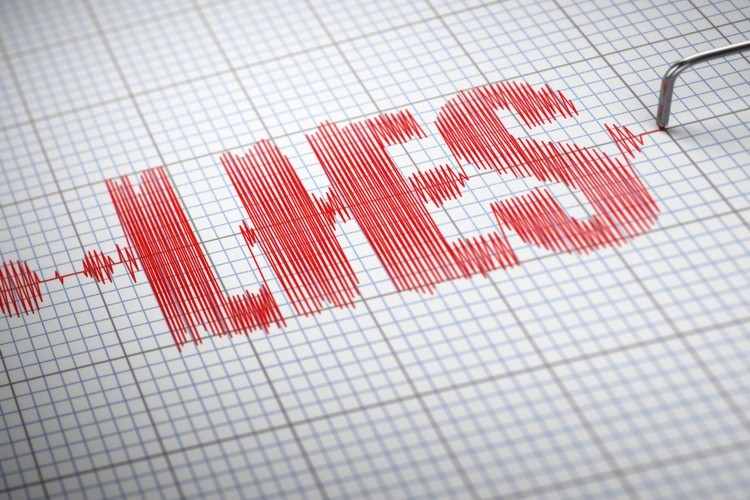 Last week, Durham released the text message that showed Sussmann lied to the FBI when he approached the bureau with manufactured dirt on Trump and said he was not working for Clinton. 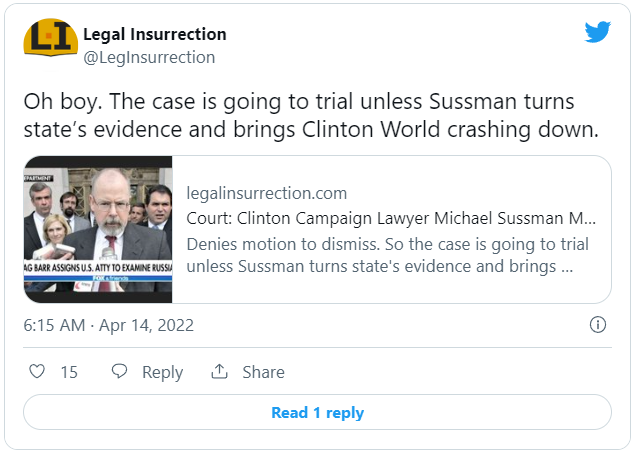 The case against Sussmann arose from his work for Hillary for America, the failed presidential candidate’s campaign outfit.

The campaign, the Democratic National Committee, and their hired political hit men, including Sussmann, orchestrated the Russia Collusion Hoax to divert attention from Clinton’s illegal use of an e-mail server. As part of the conspiracy to destroy Trump, Sussmann approached the FBI with damaging information, Durham has alleged.

“Jim — it’s Michael Sussmann. I have something time-sensitive (and sensitive) I need to discuss. Do you have availability [sic] for a short meeting tomorrow? I’m coming on my own — not on behalf of a client or company — want to help the Bureau. Thanks.

The FBI General Counsel responded: “Ok. I will find a time. What might work for you?” To which the defendant replied: “Any time but lunchtime — you name it.”

Yet Sussmann’s “billing records reflect that the defendant repeatedly billed the Clinton Campaign for his work” on Trump’s supposed ties to a Russian bank.

Durham has explained the hoax in detail, and has called what the hoaxsters did a “conspiracy” and “joint venture.” 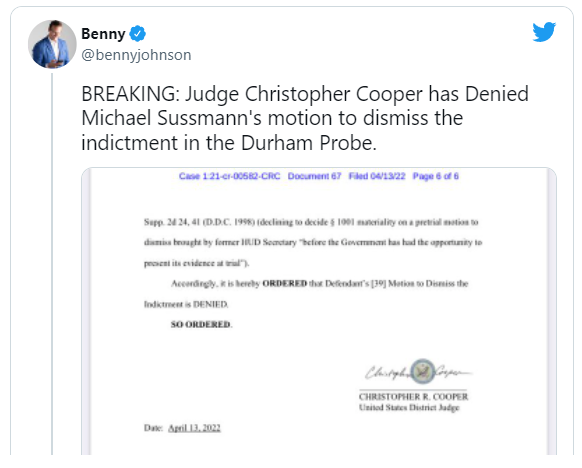 Sussmann’s attorneys sought the dismissal on the grounds that Durham’s 27-page indictment failed to state an offense.

“Sussmann’s sole argument for dismissal is that, even taking the allegations in the Indictment as true, his purported misrepresentation to Baker was immaterial as a matter of law and therefore cannot support a conviction,” Cooper wrote:

The Court will deny the motion.

“The standard for materiality … is whether the statement has “a natural tendency to influence, or is capable of influencing, either a discrete decision or any other function of the [government] agency to which it was addressed.” Focusing on the first part of the standard, Sussmann argues that his alleged statement to Baker— that he was not at the meeting on behalf of a client — could not possibly have influenced what was, in his view, the only “discrete decision” before the Bureau at the time: whether to initiate an investigation into the Trump campaign’s asserted communications with the Russian bank.

At the outset, Sussmann’s argument that the materiality of his statement must be assessed only in relation to the FBI’s decision to commence an investigation is based on an overly narrow conception of the applicable standard. He largely ignores the second part of the test: whether the statement could influence “any other function” of the agency. Applying that prong of the materiality standard, the D.C. Circuit has stated that “a ‘lie distorting an investigation already in progress’ also would run afoul [of the law].”

William Jacobsen, a law professor at Cornell University and the founder of the Legal Insurrection blog, explained why the indictment is important. And why Sussmann must go to trial.

“What the indictment demonstrates is that the Russia collusion claim leveled against Donald Trump and the Trump campaign was a fabrication of Hillary Clinton operatives who peddled the fraud to the media and FBI, allowing Clinton to use the media reports in the campaign against Trump,” he wrote:

“Much like the fabricated Steele Dossier, also paid for and arranged by Clinton operatives, Hillary Clinton and Clintonworld perpetrated a massive fraud on the American public which not only manipulated the election process but also froze the Trump presidency and nearly paralyzed the nation politically for years.”

In late March, the FEC fined Clinton’s campaign $8,000 for lying to the agency about the money it spent to create the Steele Dossier, a hoax inside the larger hoax. The FBI used the dossier to seek a warrant to tap the phone of Trump campaign official Carter Page.

The DNC will pay $105,000 for its lie about funding the creation of the Steele Dossier.