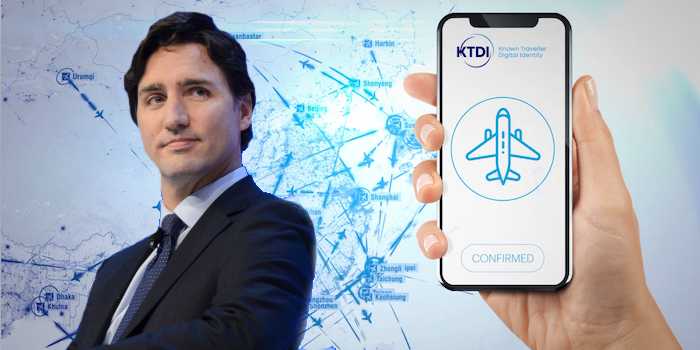 Deadlier than the so-called ‘pandemic’ that shut down much of the world for the past two years—and beginning to spread like proverbial wildfire—a World Economic Forum (WEF) digital ID project that could usher in a social credit-like system required for travelling, mirroring the one up and running in China, is now in the works.

“The Government of Canada, Air Canada and two major Canadian airports have partnered with the World Economic Forum (WEF) on a digital ID project that could see a social credit-like system be required for travelling. (Counter Signal, April 14, 2022)

The Canadian government is listed as a partner on the WEF’s own “Known Traveller Digital Identity” website.

Welcome to being an unwitting member of WEF’s “Great Reset” crawl, even though all you want to do is fly home for your mother’ funeral.

“KTDI is referred to as a way to “promote secure, seamless passenger travel in anticipation of changing traveller behaviours and expectations, the critical need to strengthen cross-border security and the surge in passenger volumes expected in the coming decade.”

“The website claims it’s based on a “decentralized digital identity” that will allow governments to confirm proof of citizenship and other aspects of identity.”

Here’s what KTDI is all about:

“Every time a government checks a person’s digital ID, it is added to their record, possibly affecting their standing. (Counter Signal)

“These attestations are the backbone of trust and the basis of reputation and, ultimately, how security decisions are made by each participating organization. The more attestations a traveller collects, the more known he or she could become,” it reads.

“It is important to note that in order to be allowed to travel, the traveller must share all information required by the relevant entity (such as a border agency).”

No wonder the Free World is in hopeless tatters

“Some have criticized the WEF for pushing the “Great Reset” onto the developed world. Indeed, WEF founder Klaus Schwab has even openly bragged about how he has penetrated the cabinets of the world, including the government of Liberal Prime Minister Justin Trudeau. (Counter Signal)

“I have to say, when I mention now names, like Mrs. (Angela) Merkel and even Vladimir Putin, and so on, they all have been Young Global Leaders of the World Economic Forum. But what we are very proud of now is the young generation like Prime Minister Trudeau,” said Schwab in 2017.

No wonder the Free World is in hopeless tatters when Merkel “and even Vladimir Putin” were the trained seals called Young Global Leaders of the WEF before even becoming leaders of their countries!

“Some claim that while the WEF is influential, it’s by no means running or directly influencing the Canadian government. However, this pilot program suggests the opposite is true.” (Counter Signal)

While the claim contends that “the WEF is by no means running or directly influencing the Canadian government, Canada is being run by WEF apostle Prime Minister Justin Trudeau which is the same thing!(Messaging Klaus Schwab: You Can Have Our Prime Minister—but Not Our Country)

“These passports by nature serve as a form of digital identity,” a World Economic Forum (WEF) document reads on page 24. (Counter Signal, April 14, 2022)

“Liberals in Canada have also suggested utilizing tracking via digital IDs to hunt down the unvaccinated during future pandemics to get them their shots.

Trudeau started to get the WEF ball rolling by giving something not his to give to the WEF’s “Great Reset’—the sovereign country called Canada.

This is the same prime minister scorned by world leaders amidst accusations that he’s nothing but a “dictator”. (Europe Welcomes PM Trudeau To His New World)

The same prime minister whose Liberal government allowed him to take away the licences and insurance of truckers in the Freedom Convoy and went on to freeze their bank accounts and those of their supporters. (Trudeau is not our Country—CANADA Is)

Stop the spread of the KTDI.  Pass on the “Great Reset” and its phony promise of building back better.

Kick Klaus Schwab out of the Land of the Maple Leaf and send Mule Trudeau along with him.

Return travelling freely back to “the norm” that was fully in place before KTDI took over our biggest and busiest airports.

Travel without the Government on board!