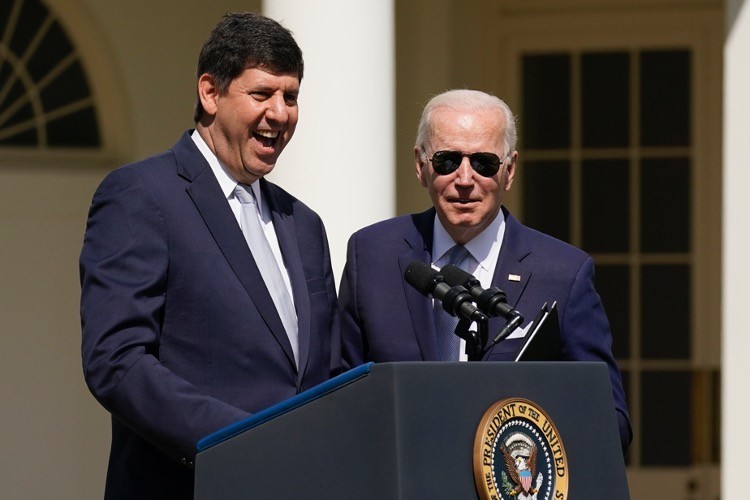 As the Biden administration continues its leftward march, anti-gun measures not seen since the Clinton administration may be on the near horizon. In fact, Biden may pass Clinton in his anti-gun zeal. His new pick for head of the Bureau of Alcohol, Tobacco, Firearms, and Explosives (ATF) makes previous directors look gun-friendly by comparison. And Biden makes Clinton look the same.

Biden’s pick of Steve Dettelbach — a former Senate-confirmed U.S. attorney for the Northern District of Ohio — comes after Senate Democrats refused to support the president’s previous nominee, David Chipman. So, Dettelbach comes in knowing he is Biden’s attempt at a consolation prize. But Dettelbach’s anti-gun agenda — in perfect accord with that of the man who chose him second — may be as much of a driving force for Dettelbach to face Senate confirmation as any sense of ambition.

Both Biden and Dettelbach seek to “solve” the “problem” of so-called ghost guns. And of course they want to do so by the power of a national ban. But the focus on “ghost guns” is a ruse. Biden has a whole slew of guns in his sights and plans to ban them all.

So-called ghost guns are guns that are privately made and do not have a serial number. Despite the rhetoric from liberal politicians and media, such guns represent a minuscule number of firearms in the United States. And — again, contrary to the rhetoric — most of them are perfectly legal DIY projects made by citizens who purchased legal parts and manufactured other legal parts to put together a legal gun.

But those facts are irrelevant to the Biden administration. Biden — and his second pick for ATF — are determined to ban a slew of guns and are using the manufactured “problem” of “ghost guns” to get the camel’s nose inside the tent.

And Democrats have turned the volume on the rhetoric up to 11. For instance, on Sunday, Senate Majority Leader Chuck Schumer (D-N.Y.) urged speed in the banning of “ghost guns,” saying, “It’s high time for a ghost gun exorcism before the proliferation peaks and before more people get hurt — or worse.” Schumer’s speech writer probably worked on that line for almost a minute.

But when the facts are not on one’s side and all one has is rhetoric, one runs wild with it. But “ghost guns” are just the false tip of the iceberg in Biden’s plans to ban guns.

As the Daily Mail reports:

The announcement coincides with the administration’s new crackdowns on ghost guns and regulations on firearms manufacturers and dealers.

“This final rule is part of the President’s comprehensive gun crime reduction strategy,” according to a fact sheet on the Justice Department action.

Biden has been on an anti-gun kick for years. As vice president, he pushed for “gun control,” and as president, he has only doubled down on that policy. In a speech on Monday, Biden announced his anti-gun policies while making it obvious to anyone who knows anything about guns that he knows nothing about guns.

Democrat President Joe Biden renewed his push to ban semi-automatic long guns in a Monday speech that focused on what his administration is doing to crack down on Second Amendment rights.

And — building up a full head of steam — Biden continued, stating that people do not need “high-capacity magazines” since deer do not wear “Kevlar vests.” This writer would like to enlighten Biden and anyone else who thinks that a 15-round magazine in a pistol or a 30-round magazine in a rifle have anything in the world to do with Kevlar: They don’t. Kevlar is a material that can be used, among other things, to stop bullets. High-capacity magazines increase the number of shots one can fire without reloading. The tie-in is a comparison between apples and rubber bands.

But liberals often show their ignorance of the things they want to damn and ban — and this is especially true when it comes to guns.

This final rule bans the business of manufacturing the most accessible ghost guns, such as unserialized “buy build shoot” kits that individuals can buy online or at a store without a background check and can readily assemble into a working firearm in as little as 30 minutes with equipment they have at home. This rule clarifies that these kits qualify as “firearms” under the Gun Control Act, and that commercial manufacturers of such kits must therefore become licensed and include serial numbers on the kits’ frame or receiver, and commercial sellers of these kits must become federally licensed and run background checks prior to a sale — just like they have to do with other commercially-made firearms.

The final rule will also help turn some ghost guns already in circulation into serialized firearms. Through this rule, the Justice Department is requiring federally licensed dealers and gunsmiths taking any unserialized firearm into inventory to serialize that weapon. For example, if an individual builds a firearm at home and then sells it to a pawn broker or another federally licensed dealer, that dealer must put a serial number on the weapon before selling it to a customer. This requirement will apply regardless of how the firearm was made, meaning it includes ghost guns made from individual parts, kits, or by 3D-printers.

And tying Biden’s baseless anti-gun rhetoric directly to his nomination of Dettelbach, the statement said:

The Bureau of Alcohol, Tobacco, Firearms and Explosives (ATF) is our top federal law enforcement agency responsible for enforcing our commonsense gun laws. Today, the President is nominating Steve Dettelbach to serve as Director of ATF.

Dettelbach — like Biden — has a history of ignorant anti-gun zeal. When he unsuccessfully ran for attorney general of Ohio in 2018, he called for reinstating the assault-weapons ban as well as implementing background checks on firearms purchases — both of which Biden is pushing for just as he names Dettelbach as his second choice to fill the head chair at the ATF.

And as Biden and Dettelbach push a false narrative about “ghost guns” to overinflate the sense of danger where guns are concerned, their sights are set wider. The statement from the administration ends by saying:

Congress needs to do its job by passing this budget and other essential legislation to reduce gun crime, including legislation to require background checks for all gun sales, ensure that no terrorist can buy a weapon in the United States, ban the sale and possession of unserialized firearms — ghost guns, ban assault weapons and high-capacity magazines, and repeal gun manufacturers’ protection from liability.

Since there is actually no such thing as an “assault weapon” (it is a made-up term), one needs to know what exactly is being banned. What Biden is pushing for Congress to ban are semi-automatic rifles with certain characteristics — such as pistol grips and the ability to accept magazines that hold more than 10 rounds. This describes a wide range of rifles that are owned by millions of Americans who have never used them in any crime.

Furthermore, repealing “gun manufacturers’ protection from liability” is a ridiculous proposal. Since guns are designed to shoot — and can be used for good or evil, depending on the person using them — allowing manufacturers to be sued for the use of guns is a travesty in the making. Can anyone imagine allowing automobile manufacturers to be sued for “car violence” — or other types of crime involving cars? Cars are used to commit bank robberies, art theft, burglaries, and a litany of other crimes. And since cars are used in drive-by shootings that also involve guns, lawyers could have a field day, suing everyone.