Points to Ponder on the Constitution and Foreign Policy 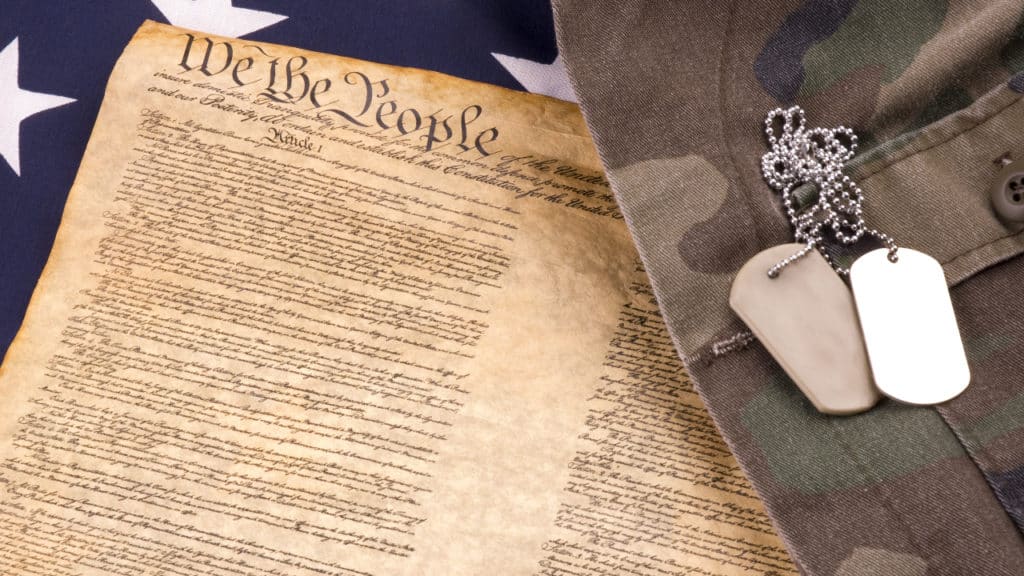 Points to Ponder on the Constitution and Foreign Policy

Some points to ponder on the Constitution:

2. The Constitution called into existence a limited-government republic, not a national-security state. If the Constitution had proposed calling into existence a national-security state, there is no possibility that our American ancestors would have approved it. In that case, the United States would have continued operating under the Articles of Confederation, a type of governmental system in which the federal government’s powers were so few and weak that it didn’t even have the power to tax.

3. Under America’s limited-government republic, there was a small, basic army. For more than a century, there was no Pentagon, military-industrial complex, foreign military bases, CIA, NSA, or FBI. Our American ancestors were fiercely opposed to “standing armies,” which was their term for a national-security state. See “The Dangers of a Standing Army.”

5. The reason for the limited powers in the Constitution and the restrictions on powers in the Bill of Rights was that our American ancestors knew that federal officials would exercise dictatorial and tyrannical powers if they were not expressly prohibited from doing so. Our American ancestors believed that the greatest threat to their rights, liberties, and well-being lay with their very own government, not with some foreign government.

6. After World War II, the federal government was converted to a national-security state. The national-security establishment — that is, the Pentagon, CIA, and NSA — was called into existence. For the first time in U.S. history, federal officials were vested with omnipotent, non-reviewable, dark-side powers — the same types of powers wielded and exercised by communist and other totalitarian regimes. These included assassination, kidnapping, torture, indefinite detention, mass secret surveillance, coups, state secrets, military tribunals, invasions, wars of aggression, foreign interventionism, sanctions, embargoes, alliances with dictatorial regimes, and regime-change operations. Over time, the military-intelligence establishment established a veritable empire of military bases, both foreign and domestic. Budgets for the new national-security branch of the federal government began soaring and ultimately threatening America with national bankruptcy. It was all done without even the semblance of a constitutional amendment.

8. If Americans are to regain a free, prosperous, harmonious, moral, normal, and peaceful society, their focus must not be on Russia, China, Syria, Iraq, Afghanistan, terrorism, communism, Islam, or any other supposed threat. Their focus must necessarily be on the entity that has destroyed their rights, liberties, and well-being, and that is currently pushing them closer to nuclear devastation, not to mention national bankruptcy — the national-security state that was unconstitutionally and illegally brought into existence to fight its Cold War racket.

As I point out in the concluding chapter of my new book An Encounter with Evil: The Abraham Zapruder Story (buy it here), the key to restoring a free, peaceful, harmonious, moral, normally functioning, and prosperous society is the restoration of America’s founding system of a limited-government republic.

Founder and President at Future of Freedom Foundation

Jacob G. Hornberger is founder and president of The Future of Freedom Foundation. He was born and raised in Laredo, Texas, and received his B.A. in economics from Virginia Military Institute and his law degree from the University of Texas. He was a trial attorney for twelve years in Texas. He also was an adjunct professor at the University of Dallas, where he taught law and economics. In 1987, Mr. Hornberger left the practice of law to become director of programs at the Foundation for Economic Education. He has advanced freedom and free markets on talk-radio stations all across the country as well as on Fox News’ Neil Cavuto and Greta van Susteren shows and he appeared as a regular commentator on Judge Andrew Napolitano’s show Freedom Watch.