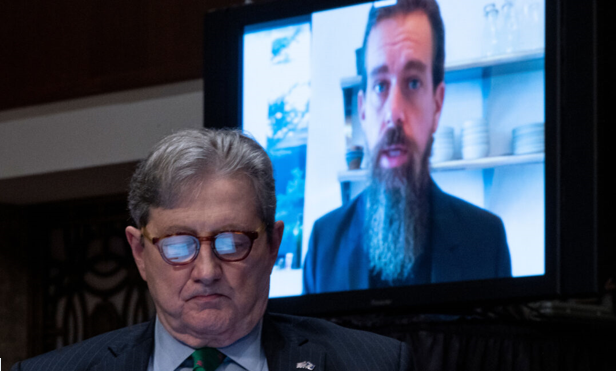 On the precipice of the regime-defining 2020 presidential election, Facebook and Twitter committed their “Pearl Harbor attack” against the incumbent president, Donald Trump, and in dutiful favor of the regnant regime’s favored candidate, Joe Biden.

In an October move that would presage the collapse of the “public”-“private” distinction during the Biden presidency—as seen in press secretary Jen Psaki’s open bragging last summer of collusion with Mark Zuckerberg to censor COVID-19 “misinformation,” and Eric Schmidt’s recently revealed role helping shape administration science policy—Big Tech oligarchs dropped the hammer on the New York Post, a high-circulation newspaper, for its reporting on Hunter Biden’s now-infamous “laptop from hell.”

The laptop’s files demonstrated the notoriously troubled Hunter’s venality, abuses of power, and general sketchiness of his foreign dealings. He and some of his cronies remain under federal investigation for possible tax and money laundering violations.

In response to the New York Post’s reportage, Twitter locked the paper out of its own account for more than two weeks. Both Facebook and Twitter, moreover, heavily limited or outright blocked disseminating the Post’s URL for the laptop story.

Crucially, the entirety of this sordid affair transpired less than a month away from a momentous Election Day.

There are myriad problems with this picture.

Most notable, perhaps, was the undoubted nature of the laptop’s authenticity; no one, not even anyone in the Biden clan, denied at the time that Hunter’s computer was genuine. One might normally deem such a detail important. But the Big Tech powers, uninterested in something as mundane as “truth,” immediately grasped the greater imperative—to discredit the story in, and even to memory-hole it from, the collective public conscience.

The entire saga was eye-opening. Purportedly “private” companies worked hand-in-hand with their favored presidential candidate, evincing the lie of the “public”-“private” distinction and exposing the sprawling, pan-institutional nature of America’s ruling class.

The ruling class’s ends sought were clear: Elect Joe Biden to be president of the United States. The means were then retrofitted after the ends were established. Big Tech knew its role, and it executed its role flawlessly.

Never mind that, if such shenanigans were to recur in 2024, with Biden as sitting president, such collusion would run afoul of the Supreme Court’s 1973 admonition in Norwood v. Harrison that the government “may not induce, encourage or promote private persons to accomplish what it is constitutionally forbidden to accomplish.”

Over the past few weeks, both The New York Times and The Washington Post, America’s two leading amplifiers of homogenous ruling class thought, corroborated and acknowledged the authenticity of Hunter Biden’s laptop.

“A day late and a dollar short” doesn’t quite cut it here. “A year-and-a-half late and trillions of dollars (in national indebtedness) short” is more like it.

Uh, can we “deplorables” get a redo?

A look back at L’Affaire Hunter, with the clarity of both hindsight and The New York Times’ and The Washington Post’s recent self-serving admissions, ought to provide a clarion wake-up call. There are few more pressing imperatives in American political life in the year 2022 than to rein in the Big Tech oligarchs and to reclaim “We the People”-rooted democracy from Silicon Valley technocracy.

The Big Tech debate is often aired in the rhetoric and phraseology of “censorship” and “speech,” but the better way to view the debate is through the lens of sovereignty and republican self-governance.

The rules by which the 21st-century public square operates cannot be written in private by shadowy Birkenstock-wearing computer science Ph.D. dweebs.

The underlying issues here are far too fundamental to our republic and our way of life. We must write the rules. We must reclaim our sovereignty from the woke titans of industry champing at the bit to impose an American social credit system.

If Big Tech can sway an election and ban a president of the United States, there is nothing it cannot do. All policy options must remain on the table to put Big Tech in its place once and for all.

Josh Hammer, a syndicated columnist, is opinion editor of Newsweek and a research fellow with the Edmund Burke Foundation. He also is counsel and policy adviser for the Internet Accountability Project and contributing editor for Anchoring Truths.