ERIC, Ballot Stuffing, and the 2022 Election 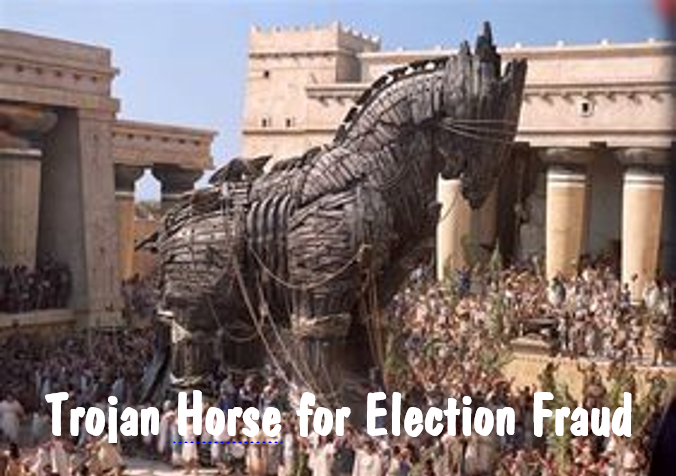 ERIC, Ballot Stuffing, and the 2022 Election

Leave it to the left to come up with a taxpayer-funded election integrity system that is instead a Trojan Horse for election fraud.

ERIC is an organization formed in 2014 to clean voter rolls. ERIC stands for Election Registration Information Center and describes itself as a “voter registration list maintenance entity.” Instead, ERIC has become a left-wing voter registration drive, using an incredibly complete list of potential voters from member states—at the taxpayers’ expense. In other words, ERIC member states’ residents are paying for corrupting their own election integrity. It should be noted that ERIC is alleged to have been funded by George Soros.

ERICis a voluntary membership organization that charges each member a $25,000 annual membership fee – for its services. Its advertised purpose was to provide states with a system of voter roll management. ERIC requires each state to submit every 60 days details of inactive and active voters. Each state in the system must provide every individual in their motor vehicle department database.

This information includes those approaching the voting age, including illegals who have been given driver’s licenses. The information must also include names, last four numbers of your Social Security Number, addresses, date of birth, email, voter activity, phone, citizenship documentation, etc. States must contact at least 95% of those not registered to vote within 90 days and solicit them to vote.

This data-sharing allegedly allows participating states to expand ballot access by giving officials information that helps them reach out to eligible voters who have moved into the jurisdiction but have not yet registered to vote. It also notifies those same officials when a registered voter moves away or dies, allowing states to maintain more accurate voter rolls.

Some red states joined after leftist courts took out the Kansas Cross Check System of voter roll cleansing, which was being utilized by several states, apparently successfully. This action left many red states without their system, so they joined ERIC.

Provision of this data to the public is something that the Democrat Party has fought against for decades since the National Voter Registration Act (NVRA), or “Motor Voter Act,” became federal law in 1993. That law allows public inspection of “voter list maintenance records,” which has become highly contentious since the 2020 election.

The signature match process on the vote-by-mail ballots needs to be viewed as the last stopgap measure against forgery, phony ballots, and stealing the 2022 election

[ERIC’s] Data collection does not stop with DMV and voter records. ERIC requires submission from each state of totals of provisional ballots counted, totals of those uncounted, and why. ERIC demands to know how many voters changed or updated their registrations on the day of voting, how many paper ballots were cast, and how many electronic votes were tabulated. ERIC even requires names of all individuals who participate in the act of registering voters, including public library staff, DHS, Depts. of Health and Public Safety, and volunteer organizations.

But ERIC’s authority over these states’ election data systems may be faltering. Kyle Ardoin, the Louisiana Secretary of State and the current President of the National Association of Secretaries of State, made a bold move and removed Louisiana from ERIC. Other states that belong to ERIC have investigations that indicate other Secretaries of State may need to follow his lead. A similar controversy in Alabama surrounding ERIC’s alleged ties to George Soros Funding is now brewing.

In Florida, conservative activists at the county level are now calling for resolutions in their Republican Executive Committees to remove ERIC from the state voter registration process. A citizen’s group has even created a revealing video of the probable effect ERIC may have had on voter registrations data in the run-up to the 2020 election.

ERIC has had a head start on developing a database to vote for those electors who have moved or died, and your state Secretary of State is assisting to increase that database. They have all the information needed to vote for these individuals except for the signature. It is tough to copy a signature, especially when you need to do it on tens of thousands of votes by mail envelopes.

ERIC could be actively facilitating interference with our elections this November. With the growing percentage of absentee voting in our elections, this issue takes on greater significance. The only way to offset the theft of our elections in the short time we have before the 2022 election is to have poll watchers be allowed access to the signature match process at the county supervisor of elections offices. This action will be the only way to ensure a clean, verifiable election in November.

Longer-term ERIC must be dropped from the state registration process. For now, only concerted action by grassroots activists pressing for a reliable signature match process in each state can protect ERIC and the ballot stuffers from stealing the 2022 election. The signature match process on the vote-by-mail ballots needs to be viewed as the last stopgap measure against forgery, phony ballots, and stealing the 2022 election.

Jeff Lukens is the Chairman of the Election Integrity Committee for the Hillsborough County (Florida) Republican Executive Committee. He can be reached [url=”mailto:jeff.lukens@icloud.com”]here[/url].