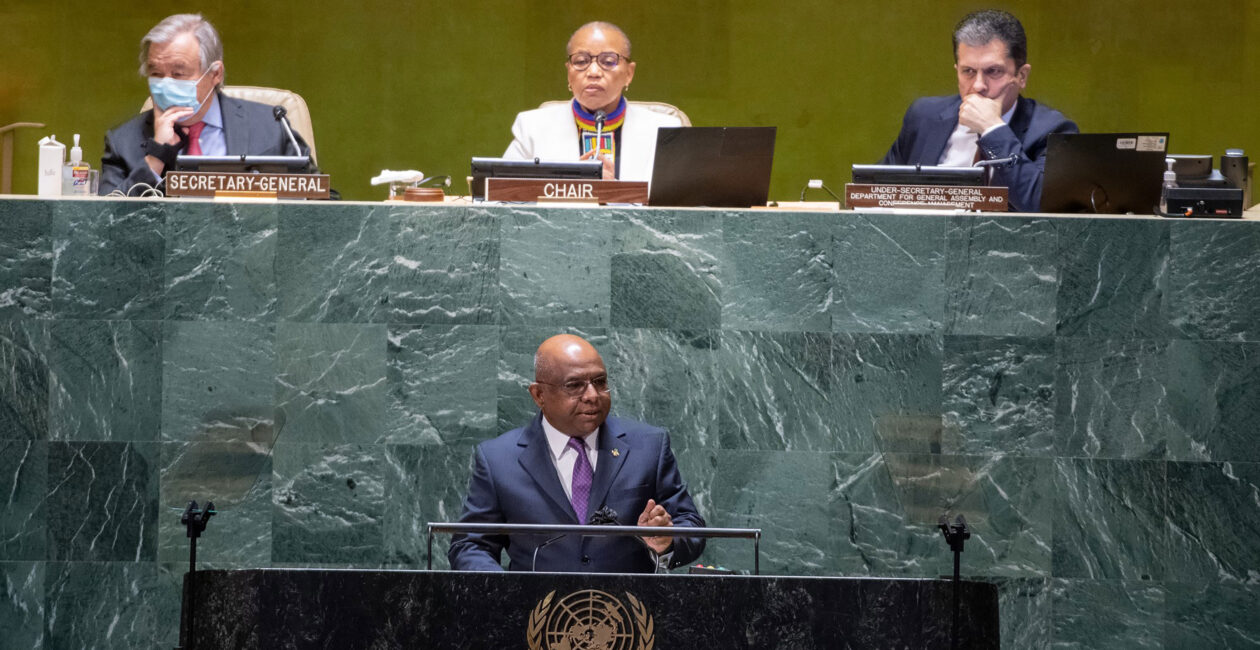 U.N. General Assembly President Abdulla Shahid of the Maldives (bottom) addresses the opening of the 66th session of the Commission on the Status of Women at U.N. headquarters in New York on March 14. (Photo: Eskinder Debebe/U.N. handout photo/Xinhua/Getty Images)

The United Nations’ annual Commission on the Status of Women concluded last week in New York. Delegates and activists from around the world met to discuss climate change, the environment, and reducing the risk of disaster with “gender equality at the [center] of solutions.”

In other words, it was business as usual.

Whatever its stated theme, radical feminists and their allies in Western governments and the U.N. bureaucracy use the annual event as cover for radical policies and abortion on demand.

This year, they folded their abortion promotion into left-wing gender ideology and yoked it with the well-funded climate agenda.

The U.S. delegation to the Commission on the Status of Women included radical partisans of the Biden administration. Jennifer Klein, director of the White House Gender Policy Council, was one. She led the White House effort to infuse gender ideology throughout American policy.

Another U.S. delegate was teenage “climate justice activist” Alexandria Villasenor. The White House used the occasion of the Commission on the Status of Women to highlight its gender equity and equality strategy and to tout its support for the deeply flawed Violence Against Women Act at home.

Tying left-wing policies on abortion and gender to the environment is nothing new. Nor is it altruistic. The U.N. has marked $100 billion in annual funds to combat climate change. That might sound nice, but it creates a giant incentive to frame the gender agenda and abortion as “climate justice.”

The U.N. LGBTI Core Group—of which the United States is a member—has done just that.

Its statement to the commission claims it “is crucial to address the critical links between gender equality, human rights, climate change and environmental issues, and the impacts on LGBTI persons.”

It’s the same story in the report of the U.N. secretary-general. The report argues that “[c]limate and environmental crises and disasters can curtail the sexual and reproductive health and rights of women and girls.”

What’s more, it claims that “gender discrimination compounds the risks for young women and adolescent girls and gender-diverse persons.” How does the secretary-general support such claims? With reports from the International Planned Parenthood Federation and Women Deliver, two of the most prominent abortion advocates in the world.

Just ahead of the opening of the Commission on the Status of Women, the World Health Organization issued its new guidance on abortion. It calls for the “full decriminalization” of abortion; that abortion be available upon the “request of the woman, girl or other pregnant person”; and the use of telemedicine to “deliver medical abortion services in whole or in part.”

It even goes so far as to call for “conscientious objection” to abortion on the part of doctors and other providers to “become indefensible.” Many speakers at the Commission on the Status of Women promoted what the pro-abortion Center for Reproductive Rights praised as the WHO’s “most progressive guidance to date.”

Sadly, international abortion advocates have a committed ally in the Biden White House. The commission’s events and resulting document show just how much political and diplomatic weight American support brings to their radical goals.

The program of official side events also reveals how radical the discourse and demands are at the Commission on the Status of Women. Most of these events hit on at least two, if not all three, priorities of gender ideology, abortion, and climate change. A few examples:

It’s hard to believe that the United Nations is serious about improving women’s lives when it seems to promote abortion at every turn. Furthermore, its embrace of gender ideology threatens to erase women by denying the realities of biological sex.

This is not just a concern of conservatives. A growing number of brave feminists fear that gender ideology will pulverize the rights of women they have fought to defend.

To improve the lives of women and girls, U.N. entities—and all member state governments—should advance pro-woman policies. That means promoting human dignity and preserving unalienable human rights for everyone.

The push for abortion and gender policy does not just depart from those rights; it undercuts them.

Grace Melton is The Heritage Foundation’s senior associate for social issues at the United Nations. She is part of the think tank’s DeVos Center for Religion and Civil Society.