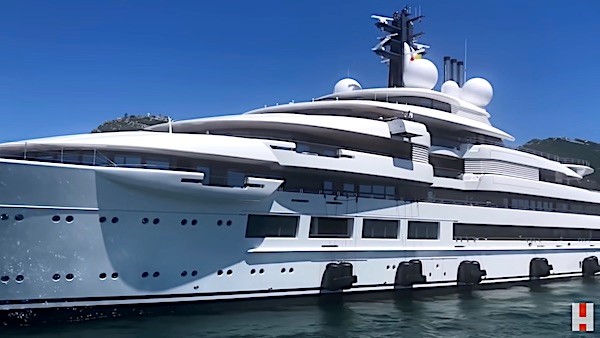 Does this superyacht belong to Vladimir Putin? (Video screenshot)

Team Navalny, supporters of Russian opposition leader Alexey Navalny, have posted online a video explaining evidence suggests that a $700 million superyacht actually belongs to Russian President Vladimir Putin and should be “arrested” as part of the international sanctions against him for his invasion of Ukraine.

At the website Meduza is a video, with English subtitles, explaining the situation. 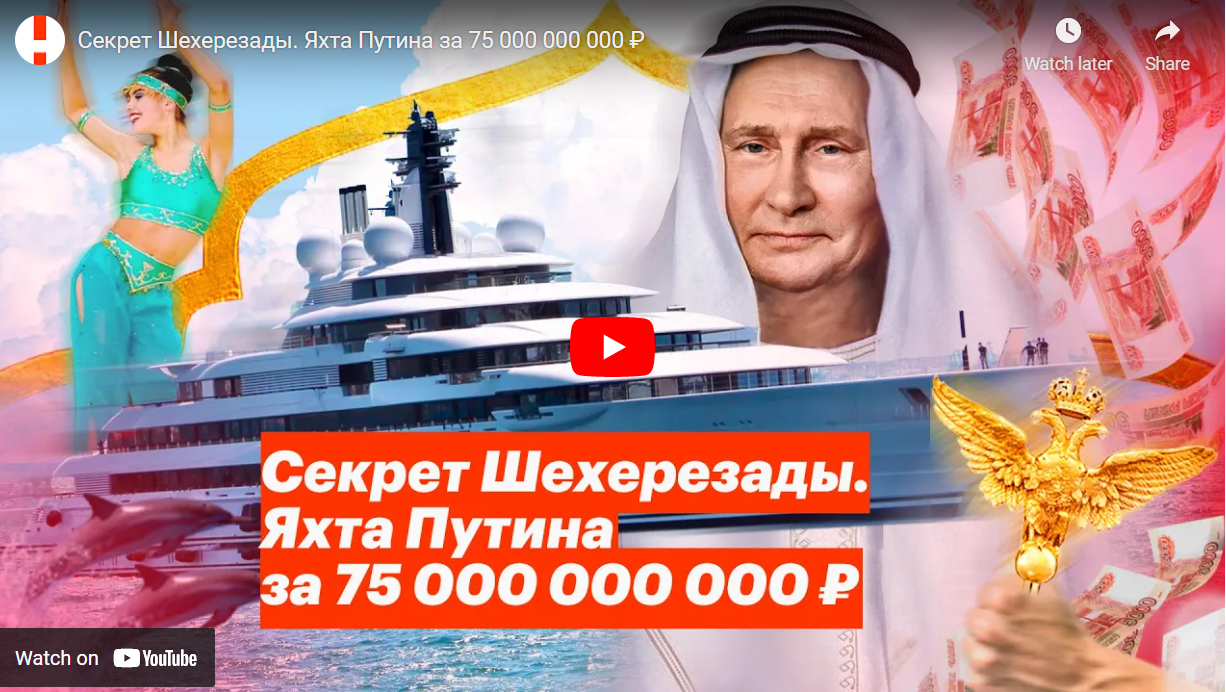 At issue is the $700 million yacht Scheherazade, which was the subject of the Team Navalny anti-corruption investigation.

The luxurious boat officially is registered to an offshore company in the Marshall Islands, but the report explains the key crew members all are working for Russia’s Secret Service, which is responsible for Putin and his properties.

At 459 feet, it’s one of the largest yachts in the world, having been launched in 2020. It’s now docked at Marina di Carrara in Italy.

Explained the report, “The yacht has six decks, with the main one housing six guest cabins, a formal dining room, a salon-spa, massage rooms, saunas, a gym, and equipment for diving and fishing.”

The New York Times said there also are two helicopter decks, a pool with a retractable cover and “gold-plated” fixtures.

“One of the upper decks houses a giant living room, dining room, two VIP cabins, and an electric grand piano, which, according to the crew, plays on its own. The deck also houses a billiard room, complete with a table equipped with a mechanism that prevents it from tilting as the ship rolls. The Scheherazade also boasts three fireplaces — one of which is wood burning,” the report explained.

Investigator Georgy Alburov explains in the video the “owner’s area” includes a private spa, Jacuzzi, and office. There’s another, “owner’s companion” space too.

It’s the only one of the world’s largest yachts whose owner isn’t publicly identified, the report said.

Team Navalny lead investigator Maria Pevchikh explained although the evidence of ownership wasn’t obtained and the captain apparently is a British national, the “rest of the crew are Russian citizens.”

“We see 23 people, of which almost half have ties to the FSO. We can’t think of better proof that this yacht belongs to Putin. Even in Italy, thousands of kilometers from Moscow, people are working on it who are officially listed as Putin’s bodyguards and personal staff,” she said.

Bob Unruh joined WND in 2006 after nearly three decades with the Associated Press, as well as several Upper Midwest newspapers, where he covered everything from legislative battles and sports to tornadoes and homicidal survivalists. He is also a photographer whose scenic work has been used commercially.