Russian Troops Are Now Turning on Each Other 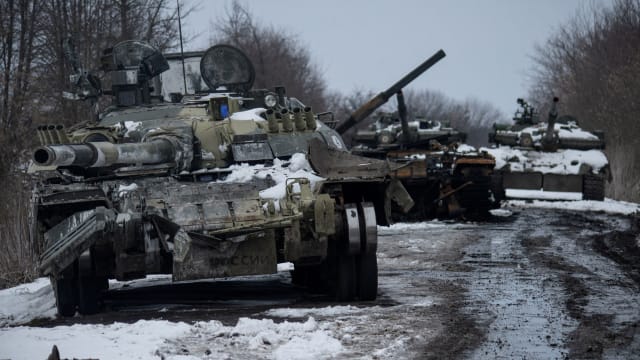 ‘It’s a Sh*tshow’: Russian Troops Are Now Turning on Each Other

“Even in Chechnya, there was nothing like this,” a soldier told a pal in an intercepted call, and reports emerge of another getting so fed up he ran over his colonel with a tank.

Two Russian soldiers have been caught venting about Putin’s “bullshit” war against Ukraine in an intercepted phone call as devastating losses reportedly led one soldier to drive over his colonel with a tank.

“Basically, it’s a shitshow here, I’ll put it that way,” an unnamed soldier near Mykolaiv in southern Ukraine can be heard telling a colleague in a recording released by Ukraine’s Security Service late Tuesday.

After telling his friend that Ukrainian forces “tore apart” a column of Russian forces sent along with his own unit, he described complete disarray among the Russian military, with 50 percent of the unit suffering from frostbite on their feet.

“But they don’t plan to treat them in the [field] hospital,” he said.

On the fourth day of their deployment, he said, the general commanding the unit, General-Lieutenant Yakov Rezantsev, told them it’d be over quickly.

“Do you know what he told us? ‘It’s no secret to anyone that there are only a few hours until this special operation is over.’ And now those hours are still going.”

He said soldiers are complaining about having Kevlar vests that lack the hard-armor panel, but they are ignored.

“‘Comrade General, damn it, I have this situation,’” he recalled troops telling their leader. “And he just says, ‘Son, be strong,’ and then he fucks off. It’s such trash here… our own plane dropped a bomb on us,” he said.

“They couldn’t even send off the 200s here,” he said, using a Russian military term for dead bodies. “They rode with us for five days.”

“Even in Chechnya, there was nothing like this,” he said, describing the situation as a “madhouse.”

“This ‘special operation,’ damnit… with respect to homes not meant to be destroyed… it’s bullshit.”

Even though “on TV” they said the Russian troops were advancing, they were actually surrounded “on all sides” by Ukrainian forces, he said.

The damning conversation was released as reports surfaced that things were so bad for Russian troops that it led one soldier to attack a colonel he blamed for troop losses.

Ukrainian journalist Roman Tsymbaliuk reported Wednesday that two tactical groups of Russian soldiers in Makarov, in the Kyiv region, lost at least half of their men in battles against Ukrainian forces.

One of the Russian soldiers “blamed the commander of the group, Col. Yury Medvedev, for the deaths of his friends,” Tsymbaliuk wrote on Facebook.

“Having waited for the right moment, during battle, he ran over the commander with a tank as he stood next to him, injuring both his legs. Now Col. Medvedev is in a hospital in Belarus, waiting for monetary compensation for combat wounds received during the ‘special military operation to protect the Donbass.’ Colonel Medvedev was awarded the Order of Courage,” he wrote.

The Daily Beast could not independently confirm Tsymbaliuk’s version of events, but Putin lackey and Chechen leader Ramzan Kadyrov confirmed Medvedev was injured during fighting in a VK post this month.

Alongside a video of an injured Medvedev being evacuated on March 11 by Chechen troops sent in to bolster Russian forces, Kadyrov claimed Medvedev’s rescue was proof of how successful Putin’s “de-Nazification” of Ukraine was.

Allison Quinn is a breaking-news reporter for The Daily Beast. She spent nearly a decade in Moscow and Kyiv reporting on human trafficking, corruption, Russia’s opposition, and the war in eastern Ukraine.

Allison Quinn is news editor of The Daily Beast