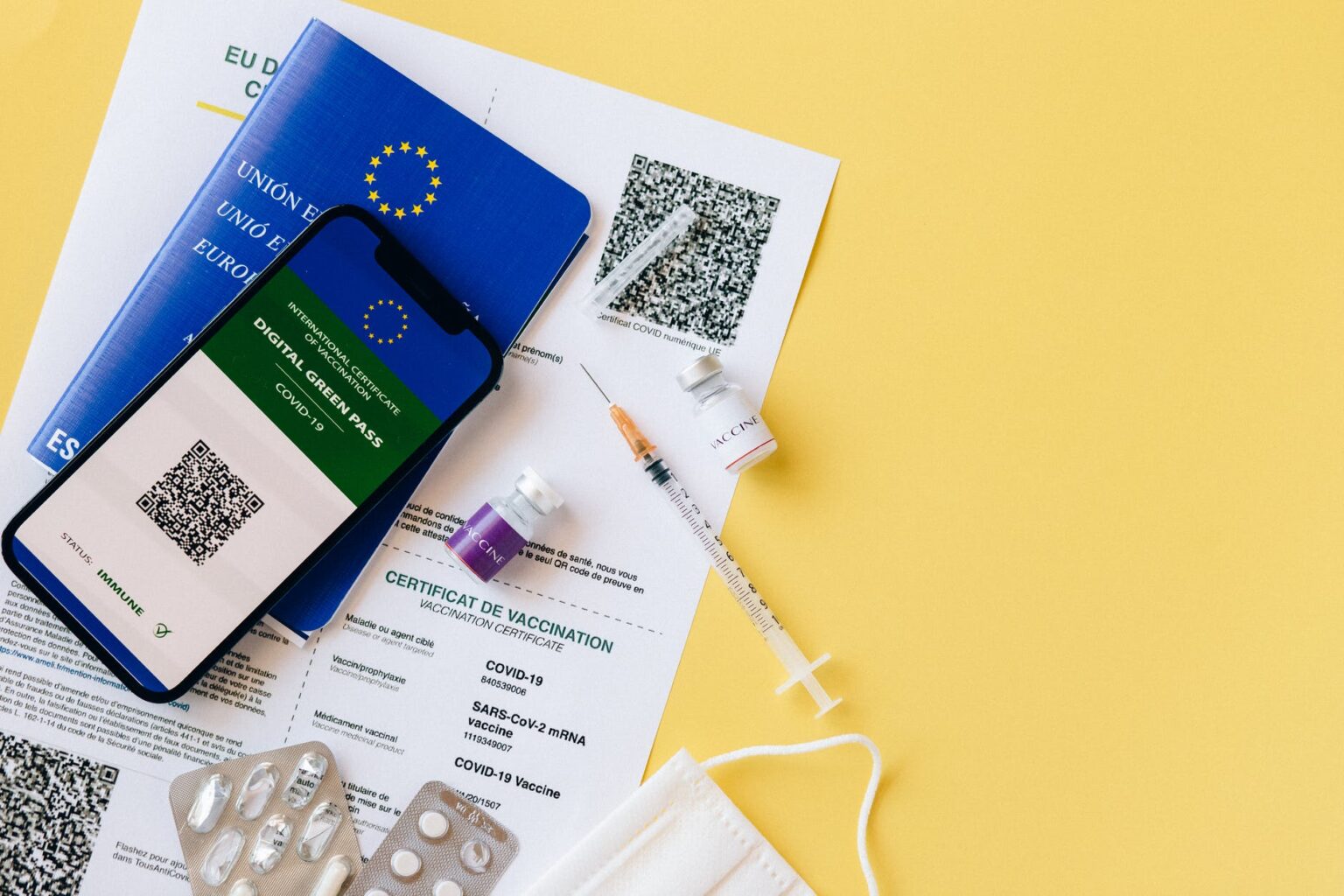 The globalists and their technocrat partners in the private sector are working like busy beavers to set up the infrastructure for a universal digital ID system in line with what the United Nations has wanted for years.

Whenever you see saturation media coverage of a singular event, you can bet the deep-state globalist predators are taking full advantage.

While all eyes are diverted elsewhere, they are quietly making hay on their globalist pet projects.

And that’s exactly what’s happening with the non-stop media coverage of the war in Ukraine involving Russia.

As Americans remain fixated on and mesmerized by the war coverage, things are happening here at home under the radar.

The globalists and their technocrat partners in the private sector are working like busy beavers to set up the infrastructure for a universal digital ID system in line with what the United Nations has wanted for years.

It’s called the SMART Health Card, and 21 states have already either adopted it or are well down the road toward adopting it.

It will be an app on your cellphone at first, with a QR Code that can be scanned to verify your identity and your vaccine history. Have you received one shot, two shots, three or four? The app will hand over your personal health information within seconds to whoever scans it. The system was developed in cooperation with MITRE, the quasi-military organization that LeoHohmann.com alerted you to back on Nov. 3, 2021.

“While the all-distracting war rages in Ukraine, technocrats at home are sneaking in a system of national vaccine passports with the disingenuous carrot that ‘Having digital access to personal health records empowers the individual,’” writes Patrick Wood, editor in chief of Technocracy.news and an expert on global technocracy and privacy issues.

Of course it’s all lies.

“The polar opposite is true,” Wood said. “The data collectors are empowered while those from whom the data is extracted are tracked, analyzed and manipulated.

“It is likely not state legislatures letting this in, but rather the state governors and their respective health departments.”

And it’s not just blue states embracing this “show your digital papers” technology, which will eventually be required to travel on a plane, a public bus or subway, or enter any store or entertainment venue. 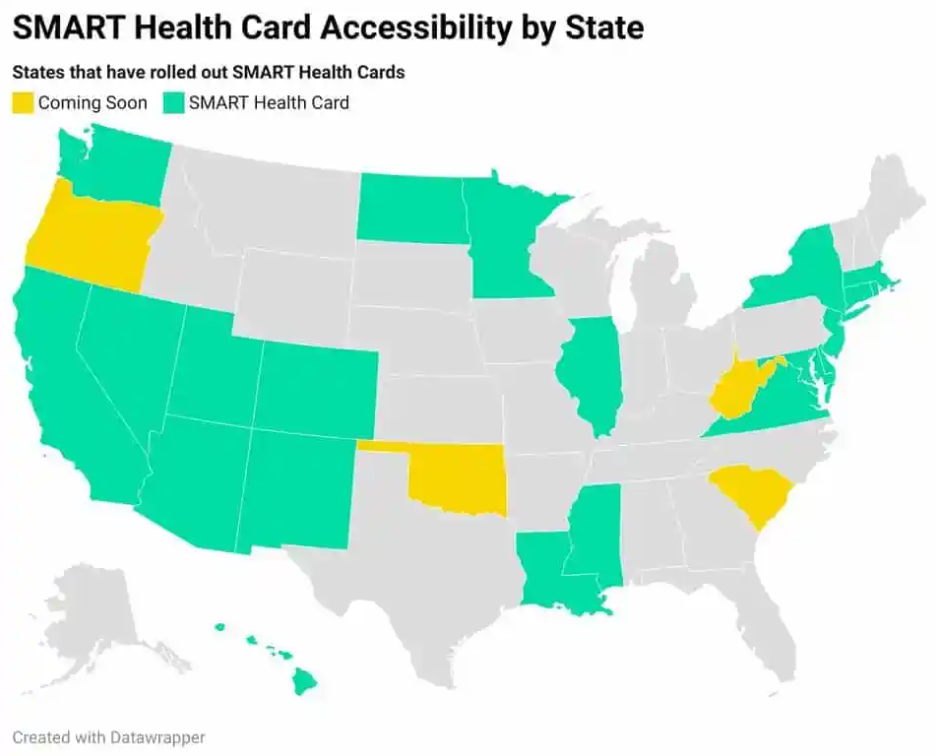 As you can see in the above graphic, Republican states including Utah, Mississippi, West Virginia, South Carolina, Oklahoma and Louisiana are all jumping on board with this global beast system. As an article in Forbes Magazine informed us last week, more red state governors are expected to join the pack, probably after they get past this year’s elections in November.

This is the same beast system advocated by Klaus Schwab and the World Economic Forum, which has been working for over a year with MITRE and other tech companies on a universal system that could be recognized by every nation in the world.

Below is an excerpt from the Forbes article, which makes this system sound like the best thing to hit the world since sliced bread.

Even as the omicron variant loosens its grip on the world, destinations continue to require travelers to show proof of vaccination. And, increasingly, a paper CDC vaccination card is not cutting it.

While the United States government has not issued a federal digital vaccine pass, a national standard has nevertheless emerged. To date, 21 states, the District of Columbia and Puerto Rico offer accessibility to the SMART Health Card, a verifiable digital proof of vaccination developed through the Vaccination Credential Initiative (VCI), a global coalition of public and private stakeholders including Microsoft, Salesforce, Oracle, the Mayo Clinic and other health and tech heavyweights.

And very soon, at least four more states will be rolling out access to SMART Health Cards. “We’ve seen a notable uptick in states that have officially launched public portals where individuals can get verifiable vaccination credentials in the form of SMART Health Cards with a QR code,” says Dr. Brian Anderson, co-founder of the VCI and chief digital health physician at MITRE.

There is already an impressively widespread availability of SMART Health Cards in the U.S. More than 200 million Americans can now download, print or store their vaccination records as a QR code. When the QR code is pulled up, only the individual’s name, date of birth and vaccination information is visible. No other medical information or personal data is shared. This code is also digitally signed to ensure that the card was issued from a verified location and to prevent forgery.

For individuals, the benefits of having access to personal digital vaccine record is three-fold. First, it’s a huge plus for travel in the U.S. and abroad.

Many indoor cultural attractions and performance venues in the U.S. require proof of vaccination. “We believe it gives people peace of mind when the folks around them are unlikely to be contagious,” says Gus Warren, CEO of Bindle, a health verification app that allows venues to verify the vaccination status of patrons.

Bindle’s growing list of clients spans more than 30 states, from blue strongholds like California and New York to red leaners like Texas, Florida, Arkansas, Missouri and Georgia. At the Kennedy Center in Washington, D.C., for example, there’s a Bindle lane that offers fastpass-like efficiency in scanning QR codes from a number of vaccine verification platforms used around the world.

“The SMART Health Card is such an important development and the Vaccine Credential Initiative has been phenomenal in getting this out there,” says Warren, noting that while Bindle recognizes several interoperable standards, the SMART Health Card has emerged as the most important. “Absolutely, it has become the standard across the U.S. and North America.”

“And at an international level, we are continuing to see intense interest in a coordinated international approach,” says Anderson. “And that has not diminished at all. I think quite the opposite.”

To wit: Every Canadian province has now adopted SMART Health Card verification, as has Aruba, the Cayman Islands, Singapore and Japan. And in Africa, the SMART Health Card has rolled out in Kenya and Rwanda, just the first of 32 African countries in the “Smart Africa” alliance to adopt a digital-first approach to healthcare records.

The Case For Red States

The second argument for adopting a digital vaccine verification system is the one swaying red-state governors: Having digital access to personal health records empowers the individual.

More than a dozen states have launched their own SMART Health Card-based portals. At least seven others — including Arizona, Mississippi and West Virginia — have turned to a third-party, MyIRMobile, to issue SMART Health Cards. Minnesota has chosen Docket, another third-party option.

“This isn’t a passport,” South Carolina’s director of immunizations told Politico. “This is essentially a Covid card that people get at their convenience because it’s their record.”

LeoHohmann.com brings you the stories you won’t hear or see from the mainstream news outlets, which only report what their corporate owners and advertisers want the public to know. But it costs money to research, write and inform. If you would like to help keep us online and to grow, please consider sending a donation, c/o Leo Hohmann, PO Box 291, Newnan, GA 30264, or via credit card below.