Zelensky’s Most Recent Power Play Makes Him A Dictator 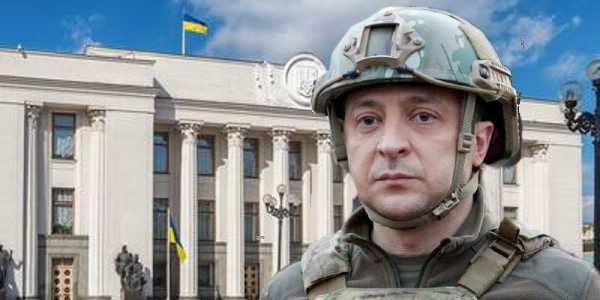 Zelensky’s Most Recent Power Play Makes Him A Dictator

Picking up on the 2016 Clinton lament that the Russians stole the election, Ukraine President Volodymyr Zelensky is off to the races as a one-man television show.

We live in an era where the charge, not proof of guilt, is a benchmark for action against your opposition.

“Heavy-handed?” How about calling it what it is: dictatorial?

“The decision was taken by the Ukrainian national security and defence council, and although 10 of the 11 were small parties, one – the Opposition Platform for Life – holds 44 of the 450 seats in Ukraine’s parliament, according to The Guardian.  (Daily Mail)

“At the same time, Zelensky signed a decree on Sunday to merge all national TV channels into a single government-run service – effectively ending the operation of private TV media.

“The now outlawed Opposition Platform for Life party is led by Viktor Medvedchuk, who enjoys warms relations with the Kremlin – so much so that Vladimir Putin is the godfather of Medvedchuk’s daughter.

“Medvedchuk was charged with treason last year and put under house arrest, in a move which angered Moscow.

“Zelensky’s heavy-handed crackdown on opposition parties with alleged links to the Kremlin came on the tail of a bid by his government to allow only a single national TV channel to operate, in what the besieged administration called a ‘unified information policy’.”

How about calling it what it is: dictatorial?

How is it even possible that one man gets to declare World War III on the world, assuming that we all go along with it?

“The pro-Kremlin oligarch escaped his house imprisonment three days after Russia invaded Ukraine, according to the Ukrainian government, and Medvedchuk’s whereabouts are currently unknown. (Daily Mail)

“President Zelensky accused the 11 blacklisted parties of ‘colluding’ with the Russian invaders, and said the suspension would last until martial law was lifted.

“In a video address on Sunday, President Zelensky said: ‘The activities of those politicians aimed at division or collusion will not succeed, but will receive a harsh response.

“Nashi (Ours) party, led by Yevhen Murayev, is the second biggest of the 11 political parties suspended in the crackdown on opposition parties.

“Murayev was pinpointed as a potential candidate to lead a puppet government in Kyiv, installed by the Kremlin, according to a British intelligence report before the Russian invasion on February 24 – a claim that the Nashi party leader denied.

“The heavy-handed move was criticized by the Kremlin, with ex-president and top security official Dmitry Medvedev writing sarcastically on his Telegram:

‘The most democratic president of modern Ukraine has taken another step towards the western ideals of democracy.

‘By decision of the Council for National Defence and Security, he completely banned any activity of opposition parties in Ukraine.

‘They are not needed! Well done! Keep it up.’

“The move comes on the tail of a decision by Zelensky to enact what he called a ‘unified information policy’ during the period of martial law, which will give his government a monopoly on the news.”

No one in the media is calling Zelensky’s latest move what it is, getting rid of the enemy, suppressing the truth.

“Any activity of politicians aimed at splitting or collaborating will not succeed,” he said.”(Daily Mail)

When will the world wake up to the fact that Zelensky is nothing more than a self-made dictator disguised as a television celebrity and comedian?