Using Nuclear Propaganda to Fuel the Flames of Fear 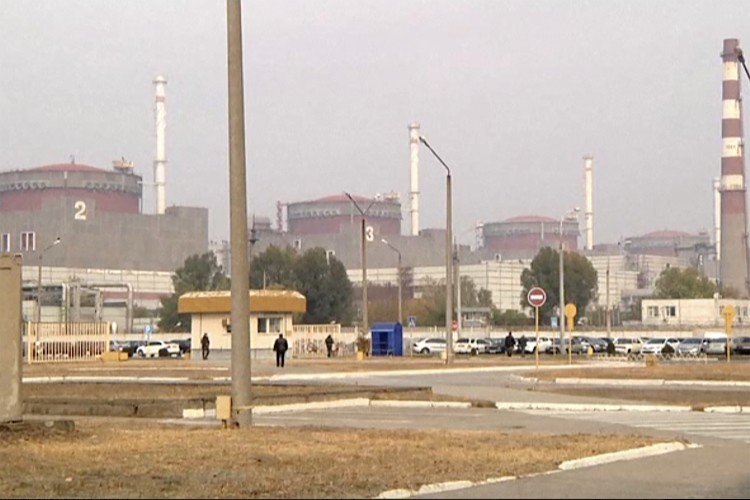 Using Nuclear Propaganda to Fuel the Flames of Fear

Media exploded on Friday with frantic news about the Russian attack near Ukraine’s largest nuclear power generating station. With six reactors, Zaporizhzhia could be some 10 times the catastrophe of Chernobyl, pundits opined. A missile hit one building at the site, though flames were extinguished without detectors reporting any change in radiation levels, according to an announcement by Rafael Mariano Grossi of the International Atomic Energy Agency (IAEA). Nevertheless, CBS News shrieked that the incident “horrified world leaders,” and quoted U.S. Ambassador to the United Nations Linda Thomas-Greenfield calling on Russia to “respect your own troops enough not to send them … on a suicide mission against a nuclear power plant.” She asserted, “By the grace of God, the world narrowly averted a nuclear catastrophe last night.”

Russians now control Zaporizhzhia in Ukraine’s southeast as well as Chernobyl in the far north. But, nervously asks the journal Nature, what about “possible dangers of warfare around” the country’s 14 other working nuclear power plants? Ukrainian President Volodymyr Zelenskyy added fuel to the metaphorical fire in a video message Friday, saying “If there is an explosion, it is the end of Europe.”

Cooler heads realize that such dire warnings from major media and world leaders are exploiting a decades-old propaganda campaign that has convinced the world that inside every nuclear reactor lies a mushroom cloud waiting to happen. Lesser known facts should alleviate some of the fear that reports from Ukraine engendered. For instance, it is impossible to cause a nuclear explosion with fuel from a nuclear power reactor that is only 3 percent enriched uranium. (A-bombs use 90 percent enriched uranium.) If such could be accomplished, what was the point of the Manhattan Project?

Nor could damage at the Zaporizhzhia reactors cause nuclear Armageddon. They are light pressurized water reactors (PWR) that use water as a moderator and a coolant. PWRs involve an intrinsic safety factor dictated by laws of physics: if they lose coolant, all chain reactions cease.

Could a meltdown occur? Yes, if spent fuel rods retain sufficient residual heat to cause one. But even in that worst case scenario, any significant radiation would be confined to the reactor. It would make for a messy cleanup, but pose no danger to the public or to nuclear workers.

An additional safety factor of most reactors, including Ukraine’s functioning reactors, is the containment structure made of heavily reinforced concrete. It surrounds the reactor, forming a dome more than three feet thick and is built primarily to contain any nuclear event. Moreover, it is designed to withstand the impact of a fully-loaded passenger jet crashing into it. For example, the Fukushima nuclear plant in Japan withstood a 9.0 magnitude earthquake and devastating tsunami that hit in March 2011. The earthquake was of far greater magnitude than the plant was rated to withstand, and despite all loss of power including backup generators, the inner containment structures remained intact, and all nuclear chain reactions came to an immediate halt. The UN Scientific Committee on the Effects of Atomic Radiation reported no danger from radiation exposure even during the crucial hours following the natural disaster.

One of the reasons the disaster at Chernobyl was more serious was that its reactor had no containment, a clear demonstration of the USSR’s distain for public safety. The reactor was moderated not by water but by a large graphite matrix that housed the uranium fuel rods. Why graphite, which is highly flammable? Because Chernobyl was not built just to generate electrical energy; the Soviets also manufactured bomb-grade plutonium there. On that fateful day in April 1986, the graphite matrix caught fire and sent radioactive products into the atmosphere. Even then, it did not spell the end of Europe as Zelenskyy predicted could result from Russian damage to Ukraine’s reactors. Indeed, there were no deaths from radiation. There were 31 casualties among the firemen who were attempting to extinguish the fire in a high-radiation environment. None were known to die from radiation, but from the heat of the conflagration.

Still, there is a chance that military armament could breach the containment and allow some release of the radioactive environment in the containment. If this coincided with a meltdown, some radiation would escape. The amount, however, would be negligible, and certainly far less than anything released by Chernobyl — which, it bears repeating, caused no radiation deaths.

The real danger would stem from “radiophobia,” or irrational fear of radiation, which the public has been conditioned to pathologically accept. The environment surrounding Chernobyl, Fukushima, or any other reputed “nuclear disasters” never approached close to the high levels of ionizing radiation that induce sickness or death. In none of these supposedly fearsome events did any of the public die from radiation. The public instead suffered from the trauma of being unnecessarily evacuated from their homes. In 2013 Reuters reported that the number of lives claimed by the Fukushima evacuation nearly equaled the prefecture’s earthquake/tsunami death toll.

Likewise, irrational fears pose a much greater danger to the people of Ukraine than does any fictitious danger of nuclear catastrophe.

(Rebecca Terrell contributed to this article.)