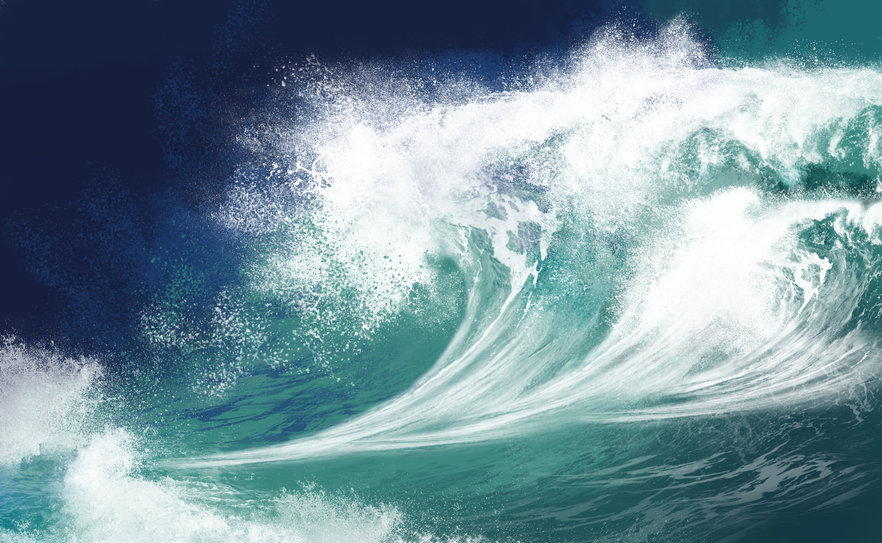 In my last article I raised the concern that East Coast offshore wind machines might not withstand destruction by the hurricanes that frequently run up the coast. Offshore wind design has been developed in Europe, where hurricanes do not occur. This makes their proposed use in places like Virginia very much an untested experiment.

In the comments someone mentioned tsunamis versus hurricanes. For those not familiar with the term, a tsunami is a big tidal wave caused by an undersea earthquake. I have never heard of tsunamis as a threat to offshore wind installations, so I did a bit of digging. Below is what I found.

Tsunamis are a serious threat to offshore wind machines along the West Coast. This is due to a combination of features. First, there is relatively little continental shelf, so a lot of offshore wind machines will be floating, not standing on the bottom. Second, the threat of tsunamis is very high because the entire West Coast is earthquake country.

These features are part of what is called “plate tectonics”. The “solid earth” we live on is actually just a very thin crust on a huge molten ball. The continents are around 100 miles thick, while the molten Earth is 8,000 miles in diameter.

Moreover this thin solid crust is in big pieces, which are called plates. These plates move around slowly, propelled by currents in the huge molten mass below. This colossal activity is called plate tectonics.

The plates rub on each other and this causes earthquakes when the rubbing is jerky. Even bigger, sometimes one plate is forced below another when they jam together. This monster activity is called subduction and it too causes earthquakes. One plate jamming into another is what causes mountains. For that matter what we call sea level rise may just be the ocean basins changing shape tectonically.

All of this tectonic activity is happening along the entire West Coast. The famous San Andreas fault is where the Pacific plate is sliding northward along the North American plate. Less well known is the undersea Cascadia subduction zone, which runs from Northern California to the northern tip of Vancouver Island in Canada.

Subduction is the reason there is very little continental shelf to mount offshore wind machines on. The shelf along the mountainous western coast of the United States is narrow, measuring only about 20 miles wide on average, whereas that off the eastern coast extends more than 75 miles in width. The western shelf is also rugged like the onshore mountains, while the eastern shelf is pretty flat.

Subduction is also why the threat of powerful tsunamis along the Pacific coast is rated “high to very high” by the experts. These ratings are made in a useful document called the “NTHMP Tsunami Information Guide” from the National Tsunami Hazard Mitigation Program, which was formed by law in 1995. Led by NOAA, the NTHMP also includes the Federal Emergency Management Agency (FEMA), the U.S. Geological Survey (USGS), and 28 U.S. states and territories.

By way of scale the Tsunami Guide says the Cascadia subduction zone may well produce a 60 foot high tsunami in the not too distant future. I cannot imagine an 800 foot tall floating wind machine being hit by such a monster wave without falling over and/or sinking.

My point here is the same as with the East Coast hurricanes. These are real threats that need to be properly designed for, if that is even possible. All I am seeing are feel good articles saying how we are going to build thousands of these monster machines lining our coasts. How will these ungainly monsters survive these threats when they happen, which they will?

Show us the engineering.

David Wojick, Ph.D. is an independent analyst working at the intersection of science, technology and policy. For origins see http://www.stemed.info/engineer_tacklesconfusion.html.  For over 100 prior articles for CFACT see http://www.cfact.org/author/david-wojick-ph-d/ Available for confidential research and consulting.