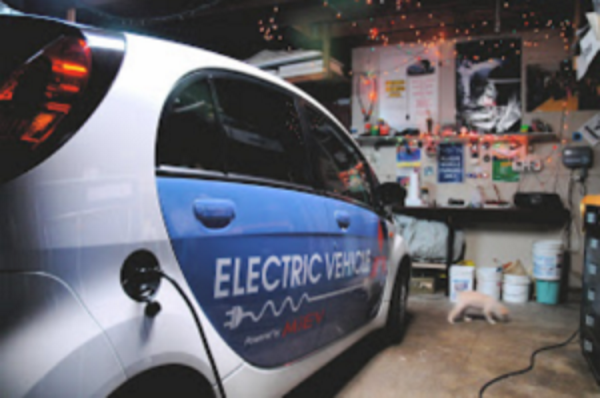 Automobile assembly plants are among the most coveted prizes politicians and business leaders can seek. A sparkling new car plant means lots of high-paying jobs, infrastructure improvements, new homes, schools. restaurants, and recreation facilities – not to mention the eternal gratitude of the community lucky enough to have landed such a big fish.

An exception to this rule is the tiny town of Rutledge, Ga., located about 45 miles east of Atlanta. If California-based EV-startup Rivian and Georgia’s ruling political class have their way, Rutledge and its environs will be transformed from a sleepy remnant of a disappearing small-town America to a bustling center for green energy. Rivian is indeed thinking big; it plans to employ about 7,500 people at its $5 billion plant to be built on 2,000 acres of land.

With barely 900 residents, Rutledge is a small speck in rural Morgan County. The area bears no resemblance to Atlanta’s suburban sprawl just to its west, and that’s just the way many locals want to keep it. Far from being a silk-stocking enclave eager to keep blue-collar autoworkers on their side of the tracks, Rutledge and the surrounding family farms are home to people of mostly modest means who cherish their quiet way of life. And they’re mad as hell now that outsiders are determined to turn their world upside down.

“Not Going to Let it Destroy Our Community”

At a recent rally at Rutledge’s only park, John Strickland, a retired law-enforcement officer who heads the local anti-Rivian effort, warned politicians to quit their “fence-sitting” and help locals preserve their way of life.

“We don’t want this assembly plant here, and we’re not going to let it destroy our community,” he told the crowd. “Gov. Kemp, you’re at a crossroads. You can either stay on the road you’re on or change course and support rural Georgia and our farmers to stop this.” (Atlanta Journal-Constitution, Jan. 4)

Strickland’s reference is to Gov. Brian Kemp (R) who supports the plant and has reportedly provided juicy inducements to lure Rivian to Georgia. In what may be the largest incentive plan in state history, the governor’s budget includes $125 million for land and employee training costs for Rivian, and that’s in addition to state law which already provides hundreds of millions of dollars in tax incentives tied to new jobs. Infrastructure improvements are also in the works, along with the development of technical courses at the high school and community college level.

Such goodies are customary for states eager to land big projects, but they have yet to generate much enthusiasm in Rutledge. The project was just formally announced by Kemp in December, and locals fear they will be stampeded into something many of them don’t want.

For its part, Rivian is planning to hold a series of public meetings in an effort to forge better relations with the community.

That won’t be easy.

“There’s nothing Rivian can do. There’s nothing that is acceptable,” Tonya Bechtler, who lives a few miles from the plant site, told the AJC. “We want things just the way they were. We are tired, and it’s time to stand up.”

But opponents of the project face long odds against the powerful forces arrayed against them. Assuming he wins the Republican primary in May to seek a second term, Gov. Kemp will face off in November against Democrat Stacey Abrams, who also backs the Rivian plant and hopes its workforce can be unionized.

Additional muscle comes from Rivian’s deep-pocketed investors, who include George Soros, who bought a billion-dollar stake in the EV startup. Soros is joined in bankrolling Rivian by Amazon, the Ford Motor Company, T. Rowe Price, and Cox Enterprises, owner of the Atlanta Journal-Constitution.

The underlying assumption of Soros, his fellow high rollers, and the political class in Georgia and elsewhere is that EVs are the wave of the future, resistance to them is futile, and you better hop on board now before this money train leaves the station.

Not Such a Sure Bet

But what if EVs don’t turn out to be the sure thing the ruling class assures us they will be? Presiding over an energy shortage and resulting higher prices that are entirely of its own making, the Biden administration is plowing ahead with its goal of having half the new cars sold in the U.S. be electric by 2030. Currently, only around 1 percent of the vehicles on our roads and highways are EVs. No amount of EV subsidies and federal regulations targeting emissions of conventionally-powered cars and trucks will make that goal achievable. Despite generous subsidies, the average price of an EV is still $19,000 higher than a gasoline-powered car. The average price of a shiny new Tesla is $75,000, a sum that is way beyond the means of the average Joe or Jane.

And don’t look for the price of EVs to come down anytime soon. Inflation has raised its ugly head and is hitting lithium, cobalt, nickel, and all the other materials that go into EVs. This will make EVs even less price competitive than they already are. And EV fans have yet to tell us where the electricity will come from that will power the tens of millions of EVs they confidently predict will be on our roadways in a few years. It won’t come from solar panels or wind mills, and if fossil fuels continue to be phased out by government policy, and nuclear plants continue to be shut down, it won’t be coming from there either.

Furthermore, the mining of the strategic materials that go into EV motors and batteries cause an enormous amount of water pollution and is primarily in the hands of China and its subsidiaries. And the requisite disposal of toxic wastes materials when the batteries and motors wear out will present environmental problems on a grand and ugly scale.

All of this calls into question the grandiose vision of a bright EV future. The last thing the people of Rutledge want is to see their community destroyed for the sake of a white elephant that produces cars that nobody wants.

Bonner R. Cohen, Ph.D., is a senior policy analyst with CFACT, where he focuses on natural resources, energy, property rights, and geopolitical developments. Articles by Dr. Cohen have appeared in The Wall Street Journal, Forbes, Investor’s Busines Daily, The New York Post, The Washington Examiner, The Washington Times, The Hill, The Epoch Times, The Philadelphia Inquirer, The Atlanta Journal-Constitution, The Miami Herald, and dozens of other newspapers around the country. He has been interviewed on Fox News, Fox Business Network, CNN, NBC News, NPR, BBC, BBC Worldwide Television, N24 (German-language news network), and scores of radio stations in the U.S. and Canada. He has testified before the U.S. Senate Energy and Natural Resources Committee, the U.S. Senate Environment and Public Works Committee, the U.S. House Judiciary Committee, and the U.S. House Natural Resources Committee. Dr. Cohen has addressed conferences in the United States, United Kingdom, Germany, and Bangladesh. He has a B.A. from the University of Georgia and a Ph. D. – summa cum laude – from the University of Munich.