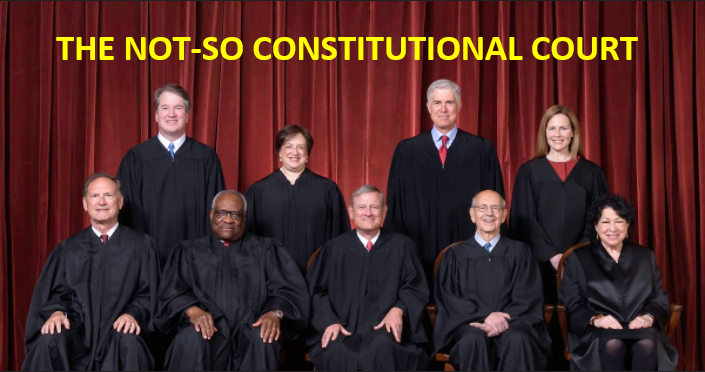 Wouldn’t you think, with all the concerns expressed about federal election validity, etc., SCOTUS would want to be involved when a case is filed in order to safeguard issues surrounding those elections? Apparently not.

For the second time, SCOTUS has ducked the issue.

As noted previously, the Court in Texas v. Pennsylvania decided not to hear a case filed by the state of Texas concerning the actions taken by non-legislative bodies in the states of Pennsylvania, Georgia, Michigan, and Wisconsin in their elections procedures in 2020 which violated the Constitution. SCOTUS amazingly held that Texas did not have “standing” to proceed with the lawsuit.

In the case of Moore v. Harper, Timothy Moore, in his official capacity as speaker of the North Carolina house of representatives applied for a stay from SCOTUS pending the filing and disposition of a petition for a writ of certiorari. He wanted an order from the Court requiring North Carolina to change its existing congressional election districts for the upcoming 2022 primary and general elections. The reason was that the North Carolina Supreme Court had rejected the map drawn by the legislature for the elections and mandated that its map be used instead in violation of the U.S. Constitution.

It would appear that Chief Justice John Roberts and Justices Breyer, Sotomeyer, Kagan and Amy Coney Barrett are not really interested in safeguarding the language of the Constitution regarding federal elections. They took the oath required in Article VI, providing inter alia:

“… all … judicial Officers, … of the United States …, shall be bound by Oath or Affirmation, to support this Constitution; .…”

“I, _________, do solemnly swear (or affirm) that I will support and defend the Constitution of the United States against all enemies, foreign and domestic; that I will bear true faith and allegiance to the same; that I take this obligation freely, without any mental reservation or purpose of evasion; and that I will well and faithfully discharge the duties of the office on which I am about to enter. So help me God.”

Since each of the Justices took an oath to support and defend the Constitution would they be subject to impeachment for bad behavior under Article III if they refuse to consider a stay or case wherein there is a claim the action taken is in violation of that Constitution?

Justice Kavanaugh, thought to be one of the conservatives on the Court, wrote an opinion which basically said that although he thought the case had merit, i.e., the action taken by the North Carolina Supreme Court was in violation of the Constitution, it could be decided later, if SCOTUS decided to hear the case. Odd reasoning for an issue that needed to be decided before the election occurred.

While the Justices mentioned above, other than Kavanaugh, failed to give any reason for their inaction, Justice Alito, joined by Justices Thomas and Gorsuch disagreeing with the decision to deny the stay clearly set out the important reasons for granting the requested stay.  Justice Alito said:

“In this case, after North Carolina gained a seat in the House of Representatives, the North Carolina General Assembly twice adopted new congressional districting maps. See 2021 N. C. Sess. Law 174; 2022 N. C. Sess. Law 3. But on both occasions, the State Supreme Court rejected those maps and ultimately ordered that the 2022 election proceed on the basis of a map of the court’s own creation….”

The North Carolina supreme court had justified its ability to draft the map rather than having the state legislature perform that function stating:

“ … the court noted that the State Constitution is difficult to amend and that North Carolina is “a state without a citizen referendum process.” App. 35a. The court concluded that “the only way that partisan gerrymandering can be addressed is through the courts.” Ibid. (emphasis added). These explanations have the hallmarks of legislation.”

“This case presents an exceptionally important and recurring question of constitutional law, namely, the extent of a state court’s authority to reject rules adopted by a state legislature for use in conducting federal elections. There can be no doubt that this question is of great national importance….”

“The Elections Clause provides that rules governing the “Times, Places and Manner of holding Elections for Senators and Representatives” must be “prescribed in each State by the Legislature thereof.” Art. I, §4, cl. 1 (emphasis added). …”

It is unfortunate that this is the second time SCOTUS has refused to consider the important provision in the Constitution which gives state legislatures, and only the state legislatures, the power to set out procedures for the election of representatives to Congress. If the Elections Clause is not to be followed will just any court be in a position to amend the Constitution without the public being involved as provided in the amendment clause under Article V?

It is preposterous to have to argue that our founders would not have wanted this issue to be seriously argued and immediately.

This is the second time SCOTUS has struck out on the issue of safeguarding the federal election process to comply with the Constitutional provisions. Is this like a baseball game where if there are three strikes it is out?

One would hope so because this apparent avoidance policy causes the Court to be meaningless and certainly violated the oath each of the justices has taken.