Putin And Democrats Are Ideological Soulmates 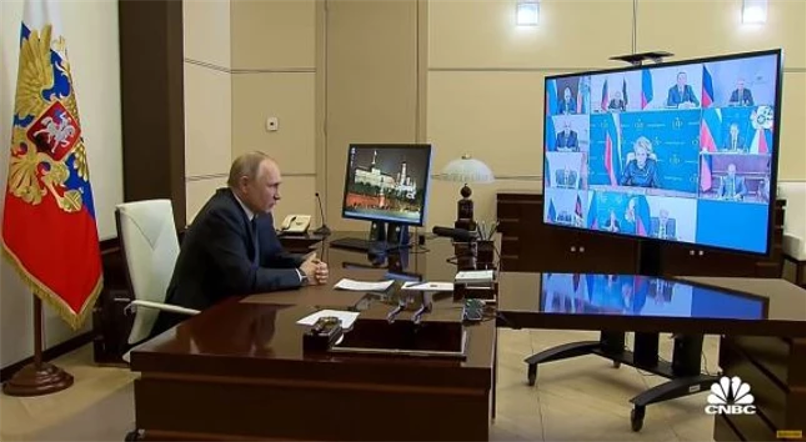 Putin And Democrats Are Ideological Soulmates

Last week in our article “Putin May Not Stop At Invading Ukraine” we recommended an article in Tablet magazine “Vladimir Putin, Tyrant” by Professor Waller R. Newell as a good primer on Russian dictator Vladimir Putin’s ideology of “Eurasianist National Bolshevism.”

And the more you read and learn about Eurasianist National Bolshevism the more it sounds like the ideology of progressive Democrats and their allies, such as the New York Times’ 1619 Project.

Prof. Newell noted that Eurasianist National Bolshevism has a lot in common with German philosopher Martin Heidegger and the Nazi ideas of a unique volk or people with a unique set of spiritual values and a calling to lead peoples everywhere out of the materialism and capitalist oppression of America and the West.

So, the idea of “American exceptionalism” in particular incites in Eurasianists a deep and abiding resentment of what they see as American hypocrisy and a form of colonialism which is used to justify the oppression and enslavement of non-Europeans and the relegation of Russia and Russians to the status of second-class citizens of the world.

This is the same criticism that American Leftists level against our country, as for example the progressives at Learning for Justice do in an article claiming that “…settler colonialism is not just a vicious thing of the past, such as the gold rush, but exists as long as settlers are living on appropriated land and thus exists today.”

Marissa Jackson Sow, in a note for The Berkeley Journal of African-American Law & Policy, 2009, “Neo-Colonialism, Same Old Racism: A Critical Analysis of the United States’ Shift toward Colorblindness as a Tool for the Protection of the American Colonial Empire and White Supremacy” argued that “…even President Obama’s election can harm repressed minorities in the long run, as the white power structure uses it as evidence that racism no longer exists, without taking steps to alter power structures that systematically repress nonwhite Americans.”

Ms. Jackson Sow, an alumna of the George Soros Open Society Foundation, argues that what is needed is a new non-Eurocentric constitution for the United States that eliminates the influence of the white colonial-era Founders in favor of the voices of America’s new, and allegedly underrepresented and systemically oppressed minorities.

This is much the same argument that one of the founders of Eurasianism, Prince Nikolia Trubetzkoy, made in the 1920s and 1930s in his polemics against Eurocentrism (Romano-Germanic world domination) and what has come to be seen as the most significant aspect of the early Eurasianist legacy, namely, their critique of Eurocentrism and what they argued is the inherently racist approach endemic to colonialism it entails.

To the Eurasianist, Eurocentrism, and the ideas of the Western Enlightenment, rationalist thinking, the rule of law, capitalism and the sanctity of the individual’s life, liberty and property are, by definition, destructive, and oppressive to non-European peoples, especially those who attempt to adopt European culture and modes of thinking.

And this is very much the same argument made by BLM founders Alicia Garza, Patrisse Cullors and Opal Tometi, who argue that “white” does not mean a person of the Caucasian race. “White” in radical construction means anyone of any race, creed, nationality, color, sex, or sexual preference who embraces Eurocentric ideas of politics, culture, and social mores which to the radical Left are irredeemably evil and anyone who aligns with them is “white” in spirit and thus equally guilty of “white crimes.”

The Black Lives Matter movement carries this anti-Eurocentric narrative to unprecedented heights, observed James Simpson, claiming that only whites can be racists. And while justifying violence to achieve “social justice,” the movement’s goal is to overthrow “white” American society to replace it with a Marxist one.

See “Reds Exploiting Blacks: The Roots of Black Lives Matter” by our friend James Simpson for a detailed examination of the tie between BLM and Bolshevism.

And Vladimir Putin understands this perfectly. In 2015, appearing on CBS News’ flagship program 60 Minutes, Vladimir Putin dropped a Eurasianist-inspired bomb on Charlie Rose when Rose asked him about his intolerance for democratic dissent in Russia, “Do you believe that everything is perfect now from the point of view of democracy in the United States?” Putin said. “If everything was perfect, there wouldn’t be the problem of Ferguson [Missouri]. There would be no abuse by the police. But our task is to see all these problems and respond properly.”

You can watch the entire interview through this link.

Those Americans who think Vladimir Putin is merely a megalomaniac dictator without any coherent ideology other than the acquisition of power and territory are sorely mistaken. Putin has a very coherent worldview that makes his alliance with Iran and China the centerpieces of a new Eurasiacentric world order. And it is undergirded by an historical analysis that is shared by many on the American Left.

The ideas that there is no hierarchy of cultures, that all political systems are equal, regardless of their treatment of their own citizens, and that adopting Eurocentric cultural and political values is a form of colonialism that is destructive to the adopting peoples would find a ready home at most American colleges and universities and among many Democrats and their allies in the media and liberal think tanks.

If Putin’s “Eurasianist National Bolshevism” is to be defeated, then Americans and Europeans are going to have to recognize that it is as much a war of ideas as it is a war of guns and bombs, and Democrats are going to have to stop agreeing with his critique of American culture and society and start helping win the fight by thwarting the creation of a new Russia – Iran – Red China political and economic hegemony.

George Rasley is editor of ConservativeHQ.com