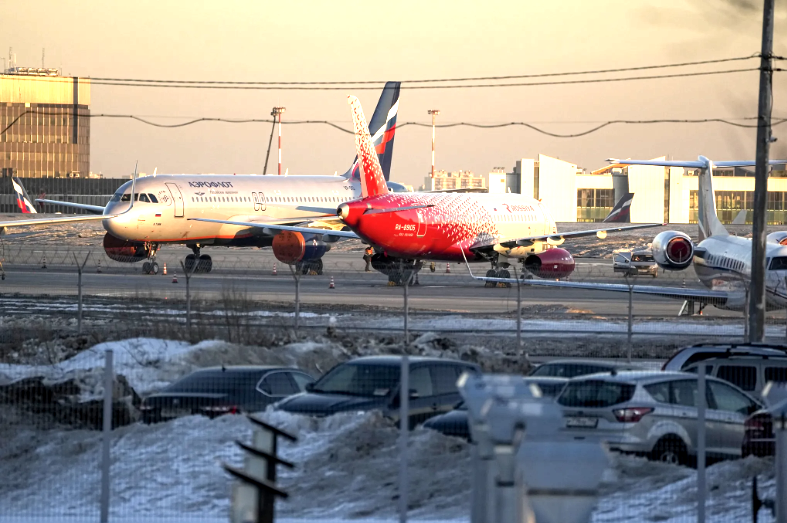 Aeroflot’s passengers’ planes are parked at Sheremetyevo airport, outside Moscow on Tuesday. Boeing announced Tuesday it was suspending work at it’s… (Pavel Golovkin / The Associated Press)More

Late Tuesday Boeing issued a brief statement announcing that it has temporarily suspended major operations in Russia, including at its Moscow Design Center where it employs more than 1,000 engineers.

Meanwhile, its major engineering design center and its central office in the Ukrainian capital Kyiv, which together have about 1,100 employees, have been closed since the first day of the Russian invasion last Thursday.

In addition to weighing its immense business interests in Russia — including a crucial supply of titanium needed to build its airplanes — Boeing points out that the lives of employees are at stake.

“As the conflict continues, our teams are focused on ensuring the safety of our teammates in the region,” the company said in its statement.

More about Russia’s war on Ukraine

The brutality of the invasion of Ukraine has prompted intense condemnation across the world and the imposition of tight economic sanctions. In response, some major businesses have announced they will sever ties with Russian companies.

Oil multinationals BP and Shell, for example, said they will divest their stakes in Russian oil giant Gazprom.

And in Boeing’s world, on Monday, Guillaume Faury, CEO of European jet maker Airbus, went on Twitter to declare that, “The war now raging in Ukraine is a stark reminder that peace, democracy and freedom have been hard earned and need to be defended.”

“We are defending something priceless — our values,” Faury added.

Boeing’s leadership has so far avoided making any similar public statement picking a side in the war. Its move to temporarily close the Moscow center is a much softer message to the Kremlin.

Boeing initially set up the engineering design center there, and later the one in Kyiv, to outsource work to engineers paid much less than their counterparts in the Puget Sound region.

The future of that source of engineering talent is now uncertain.

A Boeing memo to employees on Monday quoted Sergey Kravchenko, president of Boeing Russia who also heads up operations in Ukraine and the former Soviet republics, saying that the top priority is the safety of employees and their families.

“We are One Boeing and have each other’s backs,” Kravchenko said.

However, illustrating the difficulty Boeing’s tight relationship with Russia now brings, Kravchenko, like most important business leaders in Russia, operates with the imprimatur of the Kremlin. His company bio points out that in 2013, “Kravchenko was awarded the Order of Friendship by Russian President Vladimir Putin.”

Last November, Russian company VSMPO-AVISMA and Boeing signed an agreement strengthening their joint venture and affirmed that the Russian supplier would “remain the largest titanium supplier for current and future Boeing commercial airplanes.”

Kevin Michaels, founder of AeroDynamic Advisory and an aerospace supply chain expert, said VSMPO supplies about 35% of the titanium used in structural parts of Boeing airframes, in particular for the 787 and 777 widebody aircraft.

Titanium, lightweight and strong, is the metal most compatible with the carbon fiber composite used extensively on the 787 and the forthcoming 777X. It’s used for heavy structural parts such as landing gear.

The joint venture in Russia “has a 54,000-ton forging press that makes the main struts for the 787 and 777 landing gear,” said Michaels.

If that were cut off by Western sanctions, or by Russian retaliation to sanctions, Michaels said there are only one or two places in the world that would have the capacity to match the VSMPO facility.

However, he said it could take as much as a couple of years under strict regulatory oversight to qualify a new site to make the landing gear parts.

There are three U.S. suppliers of titanium, all smaller than VSMPO: Allegheny Technologies of Pittsburgh; TIMET, or Titanium Metals Corp., of Dallas; and Howmet, also of Pittsburgh. Two sources said Boeing has been quietly issuing requests to those companies to increase supply.

While all three could in principle ramp up capacity, Michaels said adding and training the workers needed to do so will be the limiting factor in today’s tight labor market.

The only good news is that the pandemic downturn means demand for these large widebody airplanes is low. And Boeing has a backlog of more than 110 undelivered 787s because of its problems in manufacturing that will provide a delivery buffer if there is a slowdown in building the jets.

Of course, the same constraints that limit Boeing’s room to maneuver in Russia also apply to Airbus.

VSMPO is a key supplier of titanium for the Airbus A350 widebody. And Airbus has a joint venture design center in Moscow with Russian partners that employs about 200 Russian engineers.