The Terraforming of America 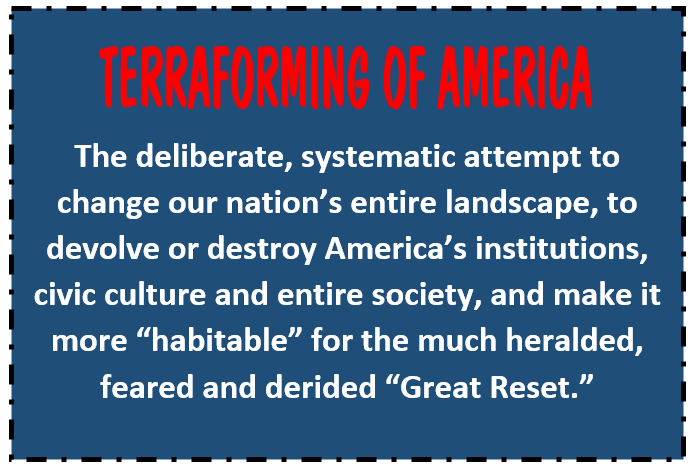 The Terraforming of America

The Left is moving rapidly to change America forever.

Except for isolated pockets of resistance, such as during Virginia’s 2021 elections and 2022 executive and legislative actions, decades of the Left’s preparations are paying off for reshaping America into a unitary totalitarian state.

Starting with the 1917 Bolshevik Revolution, the Left has acted like Chess Grandmasters.  They devised a detailed strategy, thinking and implementing many moves ahead of their opposition.

The Left’s actions, many decades in the making, is nothing less than “Terraforming” America into their Communist vision.  They are deliberately, and systematically, changing our nation’s entire landscape, modifying America’s institutions, civic culture and society to make them more habitable for their uch-heralded “Great Reset.” [John Holdren in his own (radical) words – CFACT]

The “Great Reset” is the global devolution or destruction of capitalism, democracy, entire energy and economic systems, and personal freedoms, in the name of preventing climate change. It is about eradicating “white privilege,” and the institutions and cultures of “white exploitation,” to remake society based on “equity, diversity and inclusion.” [The Great Reset | Reset and shape the future]

It all began with Stuart Chase, one of the founding members of President Franklin Roosevelt’s (FDR) “Brain Trust.” Chase coined the term “The New Deal” and promoted eliminating America’s free enterprise system, “by firing squad if necessary.” [The Rise of the Administrative State – The New American]

Chase gained inspiration and insights into how to implement a Communist state during his 1927 meetings with Stalin and Trotsky. In his 1932 “New Deal” book, Chase mused, “Why should the Russians have all the fun of remaking the world?”

Tugwell’s Constitution abolished all aspects of federalism. It eliminated states, turning them into uniform administration districts with equal population. It abolished the “Bill of Rights,” creating a laundry list of “Rights and Responsibilities” for citizens to act on behalf of the state. Any individual actions could be erased based upon “declared emergencies” (think Trudeau’s Canada in recent weeks) and for “conforming to such standards as may improve health and welfare.” Tugwell knew Sovietizing America would  “require the laying of rough, unholy hands on many a sacred precedent.” [The Rise of the Administrative State – The New American]

The Left’s “Terraforming” of America is guided by the Chase/Tugwell vision. Capturing the cultural levers and the media were achieved by the 1960s. Dumbing down the youth, and ultimately indoctrinating them in Leftist thought, began with Howard Zinn’s 1980 revisionist history, “A People’s History of the United States,” which became the standard high school textbook for a generation. [A People’s History of the United States: 1492 – Present – Zinn Education Project (zinnedproject.org)]

A parallel project was shrinking civics education to the point where only 23% of eighth-graders perform at or above the proficient level on the National Assessment of Educational Progress (NAEP) civics exam, and only 26% of Americans can name all three branches of government. [020618_CivicsEducation-UPDATED.pdf (AmericanProgress.org)]

The Left realized that America’s history must be entirely reshaped to achieve the “Great Reset.”

The Left had to prevent Americans from separately honoring the morality, integrity and greatness of Washington and Lincoln. They did so by lumping all 46 Presidents’ birthdays together in 1971. Since then, all other presidents (including mediocrities like Pierce, Fillmore and Carter) get to dilute the commemoration of our most accomplished presidents.

Communists usually use economic jealousy as their wedge issue. Focusing on America’s racial history was determined to gain more traction.

In 2019, through the New York Times and other media, the Left launched their 1619 History Curriculum Project. Under the banner of “inclusive history,” “Critical Race Theory” (CRT) and dozens of other labels, versions of the 1619 curriculum rapidly spread to thousands of schools. [Project1619]

Their final solution was demonizing everything that made America America. Their mantra became “a country built on stolen land and slavery.” [U.N. Official: U.S. Founded on Land Stolen From Indians, Built on Race-Based Slavery, BLM Movement Is Result | CNSNews]

1619’s politically correct “wokism” declared that “everything is racist” and built cases for eliminating the Electoral College, the Senate Filibuster, the Senate itself, our Founding documents, the American flag, America’s National Anthem, and even the nuclear family. All these initiatives aligned with Tugwell’s new Constitution. [Citizen Oversight: The Left’s Final Solution]

Reshaping our collective memory, and the physical touchstones that validate our memory, is directly from the Communist playbook.

Eliminating statues and eradicating holidays are central to Terraforming America. Once our national symbols and rituals are uprooted, American society will be adrift, ripe for reshaping. Thus Juneteenth is now considered more “inclusive” than the Fourth of July. One day only the “woke” holiday will remain. [Citizen Oversight: Assault on July 4th]

The Left is methodically replacing the existing “pro-America” calendar with their perverse “Advent Calendar for Anarchy.” We are now expected to annually focus on Floyd, Ferguson, Charlottesville and January 6, instead of true milestones like the signing of the U.S. Constitution on September 17, 1787.

The Left has a hundred-year head start on us and commands the levers of power. It will take years of dedication, courage, perseverance and providence to turn the tide. Let us begin in 2022.

SCOT FAULKNER was the first Chief Administrative Officer of the U.S. House of Representatives; his business-based reforms generated sustained savings of $4.5+ billion. He is the author of the critically acclaimed bestselling Congressional memoir, “Naked Emperors.” The second edition is available on Amazon.

Mr. Faulkner was Director of Personnel for the 1980 Reagan Campaign. He also served on the Presidential Transition team and on the White House Staff. He held executive positions at the Federal Aviation Administration, the General Services Administration, and the Peace Corps. He earned a Master’s Degree in Public Administration from American University and a Bachelor’s Degree in Government from Lawrence University. He also studied at the London School of Economics and Georgetown University.