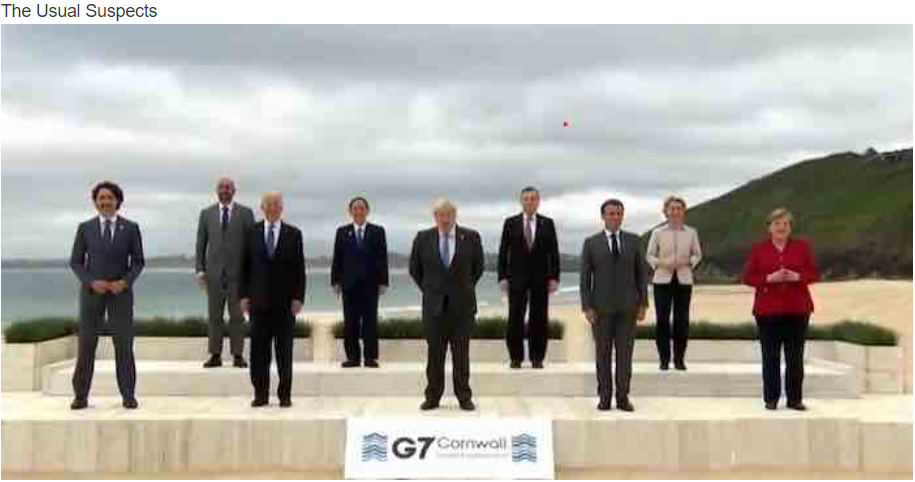 We are now engaged in a great spiritual battle, being attacked by great evil

The Canadian Freedom Convoy has given us much to ponder. It has shown the mettle Canadians are made of and it is clearly showing the world that the globalists mean business.

The Great Reset the globalists are forging is a rebranding of The New World Order, created by a Neo-# group headed by a cabal of elites like Klaus Schwab, Prince Charles, Bill Gates, George Soros, Anthony Fauci, the Bilderberg group, the UN, and others with the World Economic Forum being at the top or near the top. Their desire is to usher in new global governance by unelected leaders. Public order will be maintained by reliance on technological surveillance (microchip implants) rather than rule of law. Our Constitution will be trashed.

What we are seeing thus far is the rebirth of fascism, corporatism

Stake holders in this Reset are world government leaders, corporate leaders, journalists, activists, artists, and cultural leaders. Unfortunately, the Current Pope is all in to the distress of much of the Church. The COVID pandemic and other new plagues-in-transit are an elaborate ruse to usher in a long series of vaccines to control the population of this global centralized government. What could possibly go wrong? No, this is not a conspiracy theory.

We are not seeing a resurgence of communism. What we are seeing thus far is the rebirth of fascism, corporatism. When corporations are willing to work closely with government and do their bidding, like we are seeing in Canada and the US that is fascism. When Democrats accuse Republicans of fascism it is because the Dems have adopted it. Antifa, BLM and other communist trouble makers are merely useful idiots that will be eliminated.

Kyle Kemper, Justin Trudeau’s half-brother, has much to say concerning his brother…much of it revealing.

“He is the face and the lead spokesperson of the Canadian government, but the policies and initiatives that are driving it and are driving this narrative that he continues to push, that in my opinion is anti-freedom and anti-Canadian, is coming down from the higher ups, from groups like the World Economic Forum, the Council on Foreign Relations, and Bilderberg. They recognize they need to have these strong agents within governments and one thing we have seen within governments all around the world are weak leaders who are able to act as spokespeople.” [Think Biden and Trudeau.]

“He is not speaking from his heart. I don’t honestly believe… it’s not candid, there is no actual discussion. He is not allowed to actually engage with the Freedom Convoy and with these people, because there is a lot to unpack here and there are a lot of serious questions.”

Blackmail is a very powerful tool

“Also when you look at the history of people like Jeffrey Epstein and what their role was, to trap people and blackmail people, and you think about a life of opulence and opportunity, you make mistakes and you get coerced into doing something bad.”

“Blackmail is a very powerful tool.”

The Buffalo Chronicle, an American publication, has reported that Trudeau is covering up a sexual relationship he had with a 17-year-old female high school student while he was a teacher [Some sources say she was “much younger than 17”].

Mr. Kemper believes his brother is a pawn of the New World Order, just taking orders. Notice Trudeau’s stance in the photo (far left). It tells much. His feet are spread apart. This is the stance of either a powerful person or a defeated person wanting to be powerful. I believe it is the latter.

Trudeau openly admires Communist China and their dictatorship for their ability to get things done without having to deal with a democratic system. Obama had expressed the same frustration. If you remember, there were people in Hollywood and elsewhere who called for Obama to be dictator for life. These are some of the morons we’re dealing with.

Trudeau is demonstrating to the world how pathetic he and his globalist pals are. The Canadian PM is their mouthpiece in Canada, ‘protecting democracy’ while calling patriots Nazis and racists (how hypocritical), and declaring freedom as extremist. The words out of his mouth are false. I’m sure he knows it, but it proves how manipulated Trudeau is. The Canadians are not going along with the globalist narrative so they must be punished; take away their property, their jobs, seize their bank accounts, even take their children and kill their pets. That is not any example of a free society.

This is a perfect example of what their New World Order will look like…dictates, mandates, obey or be destroyed. That was the reason for the mandates…get people accustomed to submission. Whatever concerns Trudeau’s citizens may have, he is not listening. The people of Canada have very little representation. All things considered, democracy is now dead in Canada.

The Canadian Convoy is not merely about vaccine mandates. It is about the loss of freedom and the systematic dismantling of their way of life that many see a short distance down the road. The Canadian government spent every bit of credibility they had and screwed their people with it. Anyone who believes the government’s only interest is in the well-being of its people will believe in closing schools, churches, and businesses for a virus with a 99.5% survival rate. They will see masks, vaccines, and lockdowns, and then mandates, and then more vaccines, vaccine passports, and then the loss of free speech and the right to protest, and if you don’t obey, you will have your property confiscated. The slope is slippery, indeed..

It is nothing personal, but they do. In times past, they controlled the lower classes. These lower classes were serfs, working the land, producing the goods, providing every comfort to the upper classes.

We are now engaged in a great spiritual battle, being attacked by great evil. Both our nations are headed full speed toward totalitarian control. If that little voice inside you says this is wrong…speak up. Have the courage to say NO! It was always Christianity (not religion) that protected the weak from the strong. And it is Christianity that is in their crosshairs.

We need to encourage 2 million freedom-loving Canadians to cross the northern border into the United States and request political asylum. It will drive the Democrats and Trudeau crazy. Let us join in this struggle to preserve what has been bought in blood. We mean business, too.